SPOILER ALERT: This post is based in part on Pew Research Center’s latest News IQ Quiz. If you haven’t taken the quiz yet, you might want to do so now before reading on. 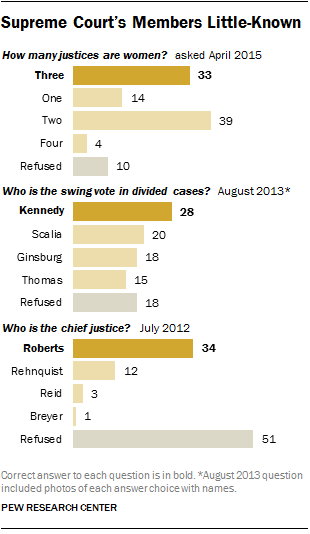 In the next few weeks, the U.S. Supreme Court is expected to issue rulings that could potentially affect same-sex marriage, health care and capital punishment in the United States.

Yet it remains an institution whose members – and even the facts about some of its most important decisions – are a mystery to many Americans.

In Pew Research Center’s most recent knowledge quiz, just 33% knew that there are three women on the Supreme Court – Justices Ruth Bader Ginsburg, Elena Kagan and Sonia Sotomayor. A higher percentage (39%) said that there are two women on the high court, while 14% said there is one and 4% said four.

It was by far the lowest correct response percentage for any of the 12 questions in the quiz. But lack of awareness about the Supreme Court’s members is nothing new. In fact, Americans have fared no better when asked other questions about the court’s members in recent years.

An August 2013 survey included the names and photos of four justices – Ginsburg, Antonin Scalia, Anthony Kennedy and Clarence Thomas – and asked which one had most often been the court’s “swing vote.” Despite the fact that there had been several closely divided Supreme Court cases during the 2012-2013 term in which Kennedy’s votes were often decisive, just 28% correctly identified him as the swing vote.

Chief Justice John Roberts is also not well-known. In July 2012, shortly after Roberts cast the deciding vote upholding most of the Affordable Care Act, just 34% identified Roberts as chief justice from a list that included Stephen Breyer, Harry Reid and William Rehnquist. That was not much better than the 28% who identified Roberts from a similar list in 2010. 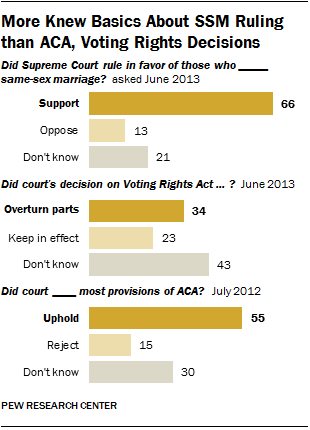 Some of the court’s pending decisions – especially its highly anticipated decision on same-sex marriage – could draw substantial public attention. But in recent years, awareness of the results of high-profile decisions has varied widely.

In June 2013, the Supreme Court ruled that married gay couples were entitled to federal benefits and, in effect, allowed same-sex marriages in California. These decisions registered strongly with the public: 66% said the court had ruled in favor of same-sex marriage supporters, and 67% knew it had ruled that states can determine where gay couples can marry; 15% incorrectly said that the court permitted same-sex couples to marry in all 50 states.

And the public showed limited understanding of the court’s ruling in June 2013 – issued a day before its decision on the same-sex marriage cases – that struck down a key part of the 1965 Voting Rights Act. Just 34% knew that the court had overturned parts of the law, while 23% thought it had upheld the law as it was and 43% said they didn’t know.