Bruce Jenner first became famous by winning the gold in the men’s decathlon at the 1976 Olympics, but in a recent interview with ABC News, he transformed his fame into something else — immediately raising the visibility of transgender adults in America. By one reputable estimate, transgender adults represent about 0.3% of the U.S. adult population, and about 5% of the adult lesbian, gay, bisexual and transgender population identifies primarily as transgender.

In 2013, Pew Research Center surveyed more than 1,100 LGBT adults to better understand their views and experiences. Among the 43 transgender respondents we interviewed, most said they first felt their gender was different from their birth sex before puberty. For many, being transgender is a core part of their overall identity, even if they may not widely share this fact about themselves with many people in their lives.

Although we did not have a large enough sample size of transgender adults to generate statistically significant findings about them, they shared their experience with us about what it was like to tell family and friends about their gender identity in their own words.

“This process is difficult,” said one 44-year-old transgender woman. “Most people know me one way, and to talk to them about a different side of me can be disconcerting. I have not told most people because of my standing in the community and my job, which could be in jeopardy.”

One 77-year-old transgender man spoke of what it was like being an “in between” person in the 1930s. “We mostly tried to conform and simply lived two lives at once. The stress caused a very high suicide rate and a higher rate of alcohol addiction (somehow I was spared both).” 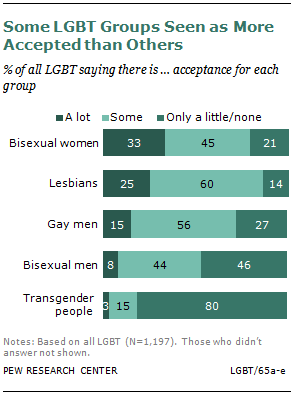 That experience contrasts sharply with a 19-year-old transgender adult who “came out” in a Facebook post. “I tagged the people that I thought (a) ought to know and (b) would also be okay with it. My friends have been cool. They generally use the right pronouns once that was explained, and they all call me by my chosen name now, which is just wonderful,” this person said.

“The people I am not out to generally include adults, such as coworkers or friends’ parents and my own family,” said the 19-year-old. “I don’t feel that, as the average person (and not in a more accepting, youthful age), they would really ‘believe’ in nonbinary genders or understand me saying that I am one.”

Even among LGBT adults, a relatively small share in our survey said they could relate to transgender people: Only 15% of gay men, 11% of lesbians and 12% of bisexuals said they share “a lot” of common concerns and identity with transgender adults.

“It’s been hard and very cleansing at the same time” to tell friends, said one 27-year-old transgender man. “The hardest part is telling old friends because they’ve known you for so long as your born gender, but most people are willing to change for you if they care enough.”

Note: To see more about the coming out experience among LGBT adults, see our interactive.