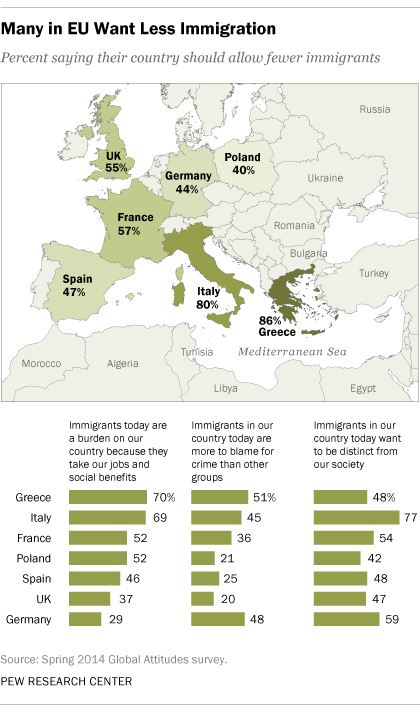 A humanitarian crisis is developing in Europe as refugees traveling through Libya and other countries seek to enter the European Union via the Mediterranean Sea, resulting in a tragic loss of life for those on overcrowded boats. Most people are fleeing countries in the Middle East and Africa, either because of civil war (Syria and Libya), poverty (sub-Saharan Africa) or other domestic troubles.

But two surveys last year of Europeans show that many, especially Greeks, Italians and others in the continent’s south, hold negative views of immigrants and are concerned about new arrivals from outside the EU.

When Pew Research Center asked people in seven EU countries about immigrants in spring 2014, very few people wanted to see an increase in the flow. In fact, in Greece and Italy, eight-in-ten or more wanted fewer immigrants to cross their border.

Greeks and Italians, whose nations border the Mediterranean and are therefore a natural endpoint for refugees crossing the sea, are also more likely to say immigrants are a burden on society because they take jobs and social benefits. By contrast, people in the UK and Germany are more likely to say immigrants make their country stronger because of their hard work and talents. People in these seven EU countries are less concerned about a possible uptick in crime due to immigration. But 51% of Greeks say immigrants are more to blame for crime than other groups, as do 48% of Germans and 45% of Italians.

Regarding refugees in particular, four-in-ten in the EU say their country’s policies should be more restrictive, but again this sentiment is particularly strong in Italy (57%) and Greece (56%), according to the German Marshall Fund’s Transatlantic Trends survey in 2014. Greeks and Italians are also the most likely to be concerned about immigration from outside the EU (84% and 76%, respectively, are concerned about this). 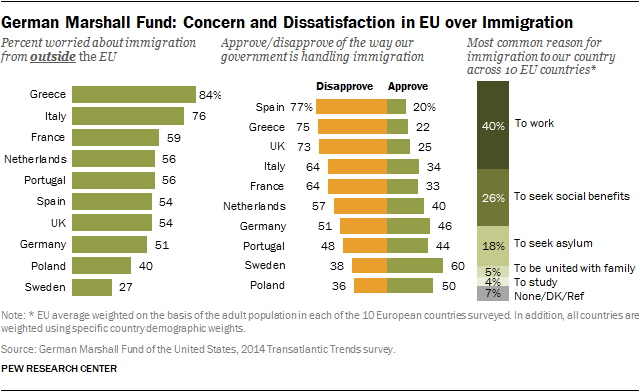 But half or more in France, the Netherlands, Portugal, Spain, the UK and Germany are also worried. People in Poland and Sweden are less concerned about immigration from outside the EU, but they are also relatively far from the Mediterranean coast.

European leaders are now trying to address the humanitarian crisis, but if sentiment captured in last year’s German Marshall survey still holds true, they face public opinion obstacles. Across 10 EU countries, six-in-ten Europeans (60%) disapprove of their government’s handling of immigration, including around three-quarters in Spain (77%), Greece (75%) and the UK (73%).