The challenge women have long faced in balancing work and family is receiving renewed public attention, with Hillary Clinton highlighting the issue when she talked about her experiences as a young lawyer and mother at a recent appearance in Silicon Valley. 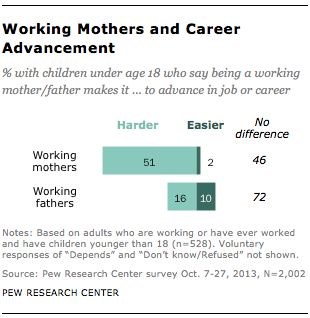 Women continue to bear a heavier burden when it comes to balancing work and family, despite progress in recent decades to bring about gender equality in the workplace. A 2013 Pew Research Center survey found that, among parents with at least some work experience, mothers with children under age 18 were about three times as likely as fathers to say that being a working parent made it harder for them to advance in their job or career (51% vs. 16%).

Analysis of government economic data suggests that most young female workers start their careers at near parity with men in wages. However, the analysis found, women struggle to keep pace with men on this measure as they begin to juggle work and family life. 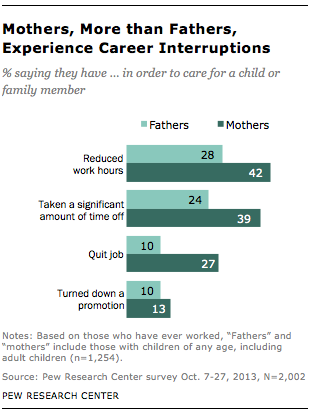 One reason mothers are more likely than fathers to say it’s harder to get ahead in the workplace may be that women are much more likely than men to experience a variety of family-related career interruptions. About four-in-ten working mothers (42%) say that at some point in their working life, they had reduced their hours in order to care for a child or other family member, while just 28% of working fathers say they had done the same; almost as many working mothers (39%) say they had taken a significant amount of time off from work for one of these reasons, compared with about a quarter (24%) of working fathers. And mothers are more likely than fathers to say they quit their job at some point for family reasons, by 27% to 10%.

Among men and women who say that they reduced their work hours to care for a child or family member, women are twice as likely as men to say this hurt their career overall, by 35% to 17%. Similarly, about one-third of women (32%) who took a significant amount of time off from work for family-related reasons say doing this hurt their career, compared with 18% of men.

Mothers don’t regret taking these steps, however. More than 90% of working moms who have either reduced their hours or taken a significant amount of time off from work say they are glad they did so.

Women more than men adjust their careers for family life
Despite challenges at home and work, most working moms and dads say being employed is what’s best for them
How American parents balance work and family life when both work
The pandemic has highlighted many challenges for mothers, but they aren’t necessarily new
For most highly educated women, motherhood doesn’t start until the 30s
Americans overwhelmingly say marijuana should be legal for recreational or medical use
Biden Nears 100-Day Mark With Strong Approval, Positive Rating for Vaccine Rollout
Quiz: Are you a Core Conservative? A Solid Liberal? Or somewhere in between?
What the data says about gun deaths in the U.S.
Social Media Use in 2021