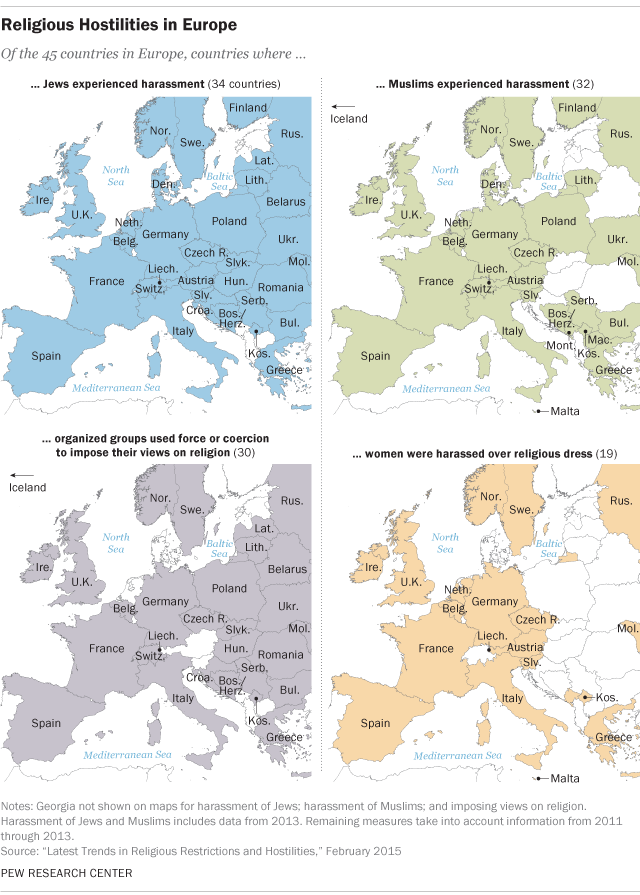 While Europe is not the region with the highest level of religious hostilities – that remains the Middle East-North Africa region – harassment and attacks against religious minorities continue in many European countries. Indeed, according to a new study by the Pew Research Center, hostilities against Jews in particular have been spreading.

Here are five facts about social hostilities – i.e., hostilities perpetrated by individuals or social groups rather than by governments – that tend to target religious minorities in Europe:

1In 2013, the most recent year covered by the study, harassment of Jews in Europe reached a seven-year high. Jews faced harassment in about three-quarters (34 of 45) of Europe’s countries. In France, for instance, three men attacked a teenager who was wearing a traditional skullcap, or kippa, in Vitry-Sur-Seine, reportedly threatening to “kill all of you Jews.” In Spain, vandals painted a large swastika on the side of a bull ring in the city of Pinto, along with the words “Hitler was right.” And in the town of Komarno in southern Slovakia, metal tiles in the pavement honoring a local Jewish family killed in the Holocaust were destroyed when vandals poured tar over them.

2Muslims experienced harassment in nearly as many European countries (32 of 45) as Jews. By comparison, the Middle East and North Africa was the only region where Muslims faced more widespread harassment, dealing with hostility in 15 of that region’s 20 countries. In Germany, bloody pig heads were found at a site where the Ahmadiyya Muslim community was planning to build Leipzig’s first mosque. And in Ireland, several mosques and Muslim cultural centers received threatening letters, with one of the letters stating: “Muslims have no right to be in Ireland.”

3In two-thirds of the countries in Europe, organized groups used force or coercion to try to impose their views on religion in 2013. Sometimes this activity is aimed at dominating a country’s public life with the group’s particular perspective on religion through means such as online intimidation of minority religious groups. Other times, it is focused on a particular religious group, such as anti-Semitic postings and anti-Muslim rhetoric on online forums. In Italy, for example, four men were sent to prison after they published lists of Jewish residents and businesses on neo-Nazi websites. This type of social hostility was more prevalent in Europe (30 of 45 countries, or 67%) than in any other region.

4Women were harassed over religious dress in about four-in-ten European countries (19 of 45) – about the same share as in the Middle East-North Africa region (where it occurred in eight of 20 countries, or 40%). This includes cases in which women were harassed for either wearing religious dress or for perceived violations of religious dress codes. In France, for example, two men attacked a pregnant Muslim woman, kicking her in the stomach and attempting to remove her headscarf and cut her hair; she suffered a miscarriage in the days following the attack. And in Italy, two Moroccan men attacked a young Moroccan woman, beating her for “offending Islam” when she refused to wear a headscarf.

5Individuals were assaulted or displaced from their homes or places of worship in retaliation for religious activities in roughly four-in-ten European countries. In Poland, for example, arsonists set fire to the door of a mosque in Gdansk. And in Greece, arsonists attacked Jehovah’s Witnesses’ houses of worship and several informal mosques in multiple cities during the year.

For details on the sources and methodology of this analysis, and to read an expanded sidebar on social hostilities toward religious minorities in Europe, see our full report on religious restrictions.