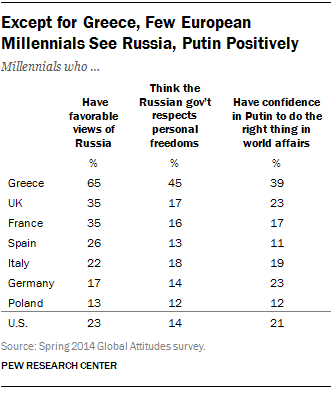 At a time of growing tension between Europe and Russia, amid speculation about the return of the Cold War, European Millennials, the generation that came of age after the end of the Cold War, show little affection for Russia.

In six of seven European Union countries surveyed by the Pew Research Center, roughly a third or less of young people born after 1980 have a favorable opinion of Russia. This poll was conducted March 17 to April 9, 2014, after Crimea’s annexation by Russia but prior to subsequent fighting in eastern Ukraine. The greatest antipathy toward Russia is among young Poles and Germans. Greek Millennials, however, are notably pro-Russian, with a majority saying they have favorable views of the country.

Few Europeans of any age hold Russia in high regard. But there is a generation gap in attitudes toward Moscow in some nations. Millennials in France and the United Kingdom are more positively disposed toward Russia (35%) than are people 50 years of age and older (21%). Notably, the same is the case in the United States: Nearly a quarter of young Americans (23%) hold more favorable views, compared with 14% among older Americans, though neither is supportive.

European Millennials’ slightly more benign view of Russia needs to be seen in context. The younger generation in Europe is also more disposed toward the U.S. and China than are their elders. This may reflect a greater acceptance of others around the world, a product of this generation developing its world view during an era of globalization. Or it may simply mean European Millennials have yet to experience the idealism-sapping frustrations and disappointments inherent in relations between countries.

Young Europeans are particularly critical of Moscow’s human rights record. A median of just 16% voice the view that Russia respects the personal freedoms of its people. This includes only 12% of young Poles, and nearly the same share among young Spanish and German Millennials. Greeks are again the exception: 45% of Greek Millennials hold the view that Russia safeguards the civil rights of its citizens.

Topics
Global Image of CountriesMillennialsComparison of Generations
Share this link: