For a more recent analysis, see “‘Particularly good days’ are common in Africa, Latin America and the U.S.” 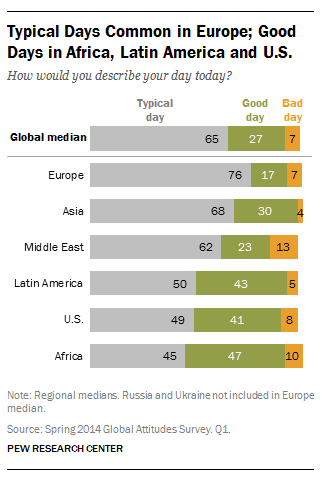 As part of the Pew Research Center’s annual Global Attitudes survey, this question is usually the first we pose to respondents in all the countries we survey. One reason we ask such a milquetoast question first is to help the respondents become more comfortable with the interviewer. The vast majority of the polls we conduct are done with face-to-face interviews in the respondent’s home, and asking about their day is one way to kick off the conversation.

Having said that, the question is not necessarily a throwaway. Looking at the responses we received this year from 48,643 people we surveyed in 44 countries provides a glimpse of the mood of individual nations and even regions of the world.

Africans and Latin Americans were more likely to say it was a good day (47% and 43%, respectively) and certain countries stand out for their more positive responses. For example, around half or more in Nigeria (58%), Colombia (57%), Nicaragua (53%), Kenya (52%) and Brazil (51%) said their day was particularly good. (For full results by country, see here).

Meanwhile, bad days were more common in Egypt (32% said it was a particularly bad day) and Jordan (27%) than in any other country, and the Middle East had slightly more bad day responses compared to other regions.

It may sound surprising, but many of those in the poorer countries surveyed were more likely than those in richer nations to say the day was a good one. When looking at this question by national income, there is a slightly negative correlation between saying the day is a good one and per capita GDP. The U.S. is a major outlier on this measure. It has the highest GDP per capita among the countries surveyed and Americans were more likely to rate a day as particularly good than people in other rich nations. Still, in almost all these countries, the most common response to this question is that the day was just “typical.” 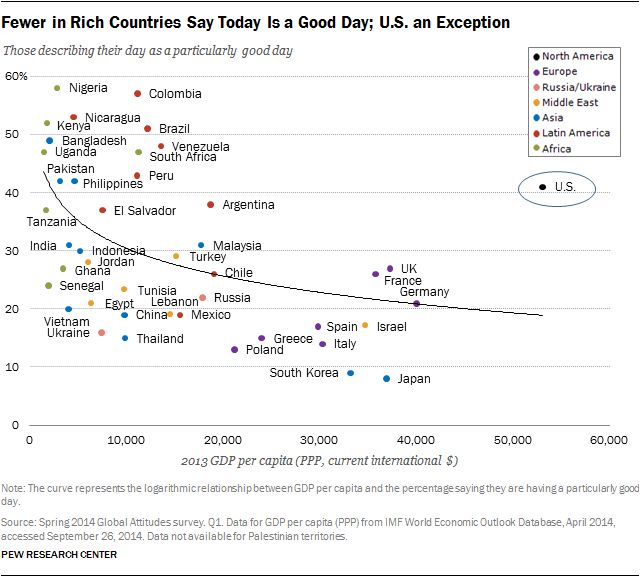 As a matter of survey continuity, almost every Global Attitudes survey going back to 2007 has had this inquiry as the first. And generally, there is little variation in the responses over time. Across the 29 countries surveyed in both 2007 and 2014, a median of 67% said it was a typical day in 2014, while 68% in the same set of countries said this in 2007.