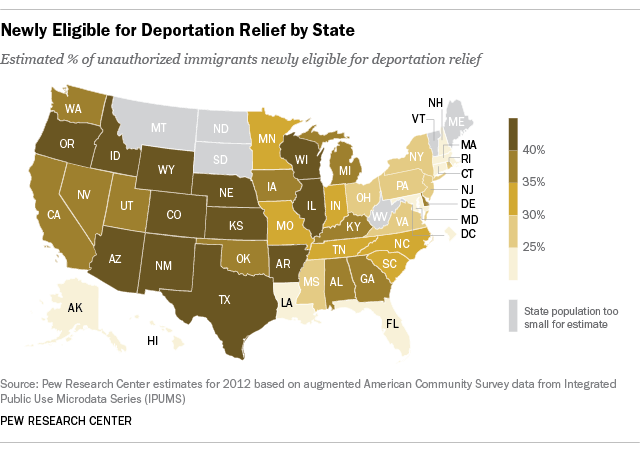 At least four-in-ten unauthorized immigrants in 12 states will be eligible to benefit from the executive actions announced Thursday by President Obama, according to a new Pew Research Center analysis.

Idaho, where 46% of the state’s unauthorized immigrant population is eligible for deportation relief, tops all other states on this measure. Other states with at least four-in-ten eligible immigrants include Arizona, Arkansas, Colorado, Illinois, Kansas, Nebraska, New Mexico, Oregon, Texas, Wisconsin and Wyoming.

More than 5 million unauthorized immigrants are eligible for deportation relief under Obama’s executive action announced Thursday or the president’s 2012 Deferred Action for Childhood Arrivals, which grants relief to young adults who came to the U.S. as children. The new executive action also expands the DACA program.

When we expand our analysis to those eligible under both the new executive action and those already covered the president’s DACA program, it’s clear that many Western states, including those with the highest shares of unauthorized immigrants in their total population, are affected. With both programs combined, Idaho again tops the list, with about six-in-ten (62%) unauthorized immigrants now eligible for relief, the highest share in the nation, according to the Pew Research analysis of 2012 data. 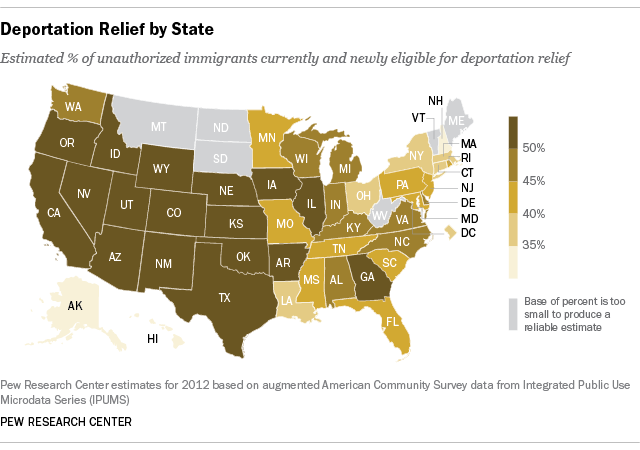 Correction: This posting and accompanying graphics have been updated with revised estimates for most states on the share of unauthorized immigrants affected by the president’s action. A previous version of this post referred to the president’s implementation of his new immigration policy as an executive order. He has taken executive action.