News of the fall of the Berlin Wall had a dramatic impact on American public opinion 25 years ago. Although it was clear that major changes were going on in the Soviet Union even before then, the wall coming down between East and West Berlin drove home in a very dramatic and convincing way to Americans that the communist world was coming undone.

No less than 82% of the public paid close attention to news about the opening of the Berlin Wall between East and West Germany. And as many as 50% paid very close attention to this story, according to an early November 1989 nationwide survey conducted by Gallup/Times Mirror. This is one of the highest levels of closely following a foreign story not directly involving the U.S. in all of the news interest measures taken by Center for the People & the Press before or since.

The impact of the “Fall of the Wall” on American opinions about the Cold War were as profound as the event was dramatic. At the time, then Gallup vice president Larry Hugick, analyzing a national survey he had conducted, wrote:

“The political and social changes that have taken place so swiftly in Eastern Europe are being embraced by Americans with few reservations. Most see the democracy movement in Poland, Czech, and East Germany continuing for the foreseeable future … and … Americans predict a better life for the people of Eastern Europe and a more peaceful world.”

This was indeed a game changing moment for the public, and they have not forgotten it. Pew Research Center surveys over the years have found as many as six-in-ten Americans, who were ages 8 and older at the time, say they remember where they were or what they were doing when they heard the news about the end of the physical divide between East and West Berlin.

The event was accompanied by a surge of optimism in the U.S. about the future course of events in Eastern Europe – 88% saw increasing political freedom in the Soviet satellite states. About seven-in-ten (71%) Americans thought the economic well-being of Eastern Europeans would increase, and 74% thought religion would play an increasing role in people’s lives, according to a 1989 Gallup poll.

The public’s optimism was predicated on a changing view of the Soviet Union itself. A Gallup/Times Mirror survey a year earlier had found 76% thinking that the USSR was increasingly likely to live in peace with its neighbors, and almost as many (65%) believed, that under Soviet President Mikhail Gorbachev, the communist superpower was undergoing major changes from what it had been under earlier leadership.

The fall of the Wall only improved the American view of Gorbachev. His favorable rating in the U.S. jumped from 40% in 1987 to 77% in the days following the end of divided Berlin, based on surveys by Gallup/Times Mirror and Gallup, respectively. In many ways, this was the moment when there were clear signs to Americans that Cold War animosities were beginning to fall away. A Wall Street Journal/NBC News poll conducted in December 1989 found that 52% of the public believed that this was the beginning of a long-term positive relationship between the U.S. and the USSR, and no fewer than 65% in a Gallup poll thought the two former antagonists would be allies by the year 2000. 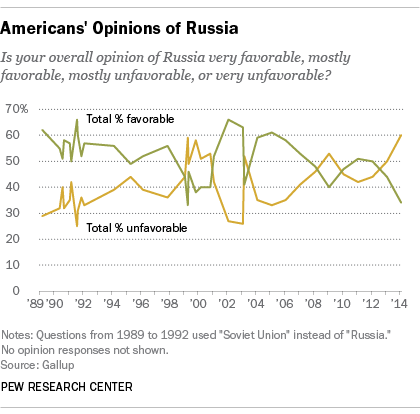 In that vein less than a year later, most Americans (58%) were saying they had a favorable view of the communist superpower, who had been their Cold War nemesis for four decades. And that positive view of Russia mostly carried until very recently, only to sour again when Vladimir Putin returned to power in 2012, according to Gallup surveys.