The Census Bureau released new data today that for the first time counted same-sex spouses along with all other married couples in its largest household survey, which, despite the new additions, showed no reversal in the long-term national decline in marriage. 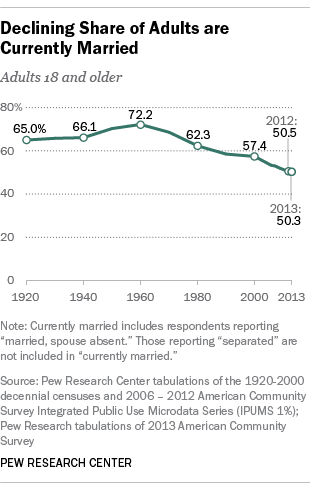 The share of Americans ages 18 and older who are currently married inched downward in 2013, to 50.3%, compared with 50.5% in 2012, according to Pew Research Center calculations from the 2013 American Community Survey.

The Census Bureau estimates there were nearly 252,000 households headed by same-sex married couples in 2013, a notable increase from the 182,000 estimated in 2012, but still a small fraction of the 56 million total U.S. married couples. In the past, if two people of the same gender said they were married, the Census Bureau reclassified them as cohabiting partners.

In the newly released data, same-sex cohabiting partners appear to make up a smaller share of 2013 households than in 2012. This change would be expected if some same-sex couples previously counted with cohabiting couples were reclassified as married in census data, according to Gary Gates, a demographer who studies same-sex couples at the Williams Institute at UCLA Law School.

However, any Census Bureau statistics on same-sex couples should be viewed with some caution, because the agency has acknowledged problems in counting this relatively small group. The largest issue seems to be that, in filling out their forms, some people make unintentional errors, such as choosing the wrong gender for themselves or their spouses or partners, for example.

Also today, the Pew Research Center is releasing a public-use dataset from the 2013 Survey of LGBT Adults, an online survey of 1,197 self-identified lesbian, gay, bisexual and transgender adults in the U.S. ages 18 and older. The survey found that most of these adults believe that society has become more accepting of people who are LGBT. Even so, a majority of LGBT adults report that they have been discriminated against or excluded at some point in their life because of their sexual orientation or gender identity.

An SPSS file containing the dataset, along with complete documentation, are available for download.

The Census Bureau’s decision to include same-sex spouses as married couples coincides with rising public support for same-sex marriage, as well as court or legislative decisions favoring it. Same-sex marriage is legal in 19 states and the District of Columbia. An additional 28 states have constitutional prohibitions against same-sex marriage.

The overall decline in marriage among adults in part reflects the rising age when people first get married. Although the median age at which Americans first marry was once in the low 20s, it’s now is in the late 20s for both men and women. But other factors may also be in play: Marriage is declining most sharply for less-educated adults.

In part because marriage is so uncommon at younger ages, the Pew Research Center analyzes marriage trends for adults ages 18 and older. A recent widely cited analysis by the Martin Prosperity Institute concluding that single people make up more than half the U.S. adult population based its numbers on ages 16 and older.

Correction: A previous version of this post inaccurately said that the Census Bureau did not supply a breakout of the number of same-sex married couples.