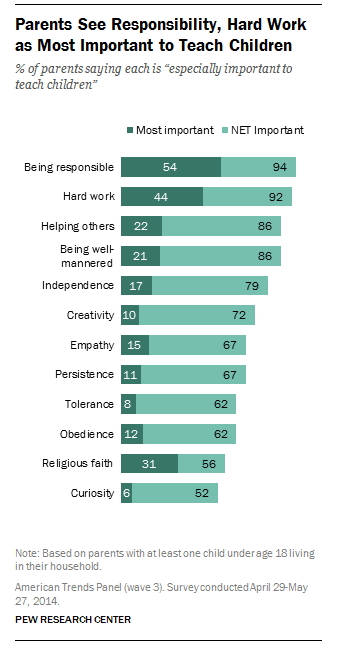 A new report released today by the Pew Research Center shows how the values Americans bring to parenting are strongly linked to their own ideological leanings. But aside from ideology, the survey finds widespread agreement among parents over the traits that children should be taught.

Moreover, there are only modest differences in these attitudes among parents with one child or several, and among those with children of different ages. For the most part, married mothers and single mothers also share common ground on the values important to teach children.

These findings are based on a Pew Research Center survey conducted April 29-May 27 among 3,243 adults, including 815 parents, who are part of Pew Research’s new American Trends Panel, a nationally representative panel of randomly selected U.S. adults surveyed online and by mail.

Survey respondents were asked how important it is to teach a variety of qualities to children, and then they were asked which three of the 12 qualities were the most important.

Fully 94% of parents say it is important to teach children responsibility, while nearly as many (92%) say the same about hard work. Helpfulness, good manners and independence also are widely viewed as important for children to learn, according to the survey.

The qualities and characteristics that parents value are remarkably consistent regardless of the ages of their children. Whether they have preschool-aged children, elementary-aged children or teenagers in the home, parents agree that the most important traits to teach children are responsibility and hard work.

There are few differences across other child-rearing values as well. Parents of teens are more likely than parents with younger children to stress independence and good manners, while parents of young children are somewhat more likely to view the teaching of creativity as important. But large majorities among parents with younger and older children prioritize each of these traits.

In large part, parenting values also are similar across families big and small. However, religious faith and obedience are viewed as more important by parents of three or more children compared with parents of smaller families.

And while 69% of parents with three children say it is important to teach obedience, fewer parents with smaller families agree (60% of those with two children, 58% with one child).

Single-parent households are becoming increasingly common in the U.S. The new survey suggests that single mothers and married mothers hold some parenting values in common, but differ on several others.