A broad overhaul of the nation’s immigration laws has been debated and discussed among policy makers for a dozen years, but Congress has yet to pass a bill. Last month, several Hispanic advocacy leaders criticized the president for policies that have contributed to the more than three million immigrants deported since 2004. Yet now, some Latino leaders are wondering if immigration reform is perhaps “crowding out other issues facing the Latino community.” 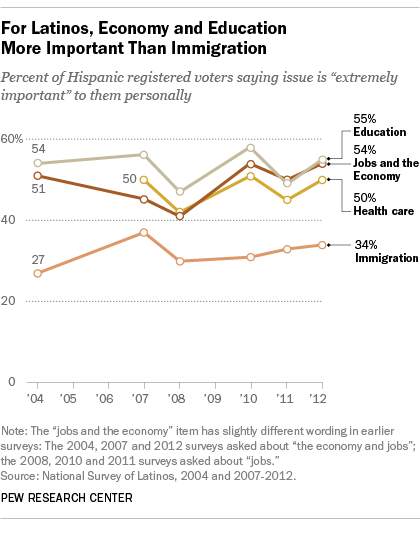 Immigration reform “now occupies almost all the Latino policy agenda, sucking up, as one colleague recently put it, all the oxygen on Latino issues,” according to a recent commentary from Angelo Falcón, National Institute for Latino Policy president.

Indeed, when Pew Research Center has surveyed the Hispanic community, there are several issues that consistently rank higher on the list than immigration. In 2013, some 57% of Hispanic registered voters called education an “extremely important” issue facing the nation today. That’s compared with jobs and the economy (52%) and health care (43%). Just 32% said immigration.

Since 2007, about one-third of Hispanic registered voters have called immigration an “extremely important” issue to them personally. Even among Hispanic immigrants, the share was 35% in 2012.

While about seven-in-ten of all Latinos in 2013 said it was important for Congress to pass significant new immigration legislation that year, the share who said so was higher among immigrants (80%) than among the U.S. born (57%). Among the general public, 49% of U.S. adults said so when asked the same question in February.

In some respects, Hispanics’ focus on education as a top issue makes sense. In 2010, Hispanics had the highest birth rates—80 births per 1,000 women of childbearing age, compared with 64 for blacks, 59 for whites and 56 for Asians. Fully one-in-three (33%) Hispanics are school age (under 18), compared with one-in-five (20%) whites.

The economy has been another top issue among Hispanics, who said the recession hit them harder than other groups. Among Hispanics in 2012, the economy and jobs (54%) ranked about as high as education (55%) as an issue “extremely important” to them personally. The unemployment rate among Hispanics peaked at 12.3% in 2010, compared with 8.9% among non-Hispanics. The unemployment rate for Hispanics has steadily fallen since then (8.9% in 2013), but remains above pre-recession levels (4.9% in 2006).

Immigration Issue
5 takeaways about the 2014 Latino vote
Latino vote is small in nearly all states with hot Senate races
5 Facts about Republicans and immigration
High rate of deportations continue under Obama despite Latino disapproval
Quiz: Are you a Core Conservative? A Solid Liberal? Or somewhere in between?
More Americans now say academic concerns should be a top factor in deciding to reopen K-12 schools
Defining generations: Where Millennials end and Generation Z begins
How the Coronavirus Outbreak Has – and Hasn’t – Changed the Way Americans Work
Views on Race in America