Millennial adults in the United States – that is, Americans ages 18 and older but born after 1980 – are more “detached from institutions,” including traditional religion, than their elders, according to a Pew Research report released earlier this year. We’ve also known for a while that younger generations are less likely to affiliate with religious groups. 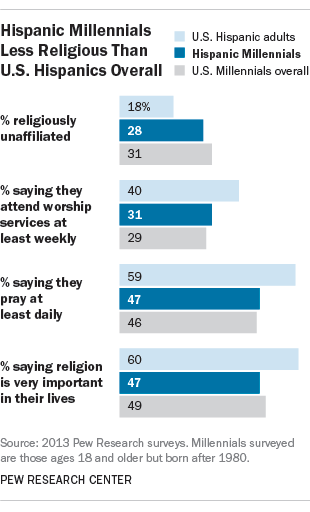 Our new survey of U.S. Hispanics and religion enables us to take a more detailed look at whether the trend holds true among the country’s largest ethnic minority. And indeed, Hispanic Millennials mirror young American adults overall in their lower rates of religious affiliation and commitment compared with their older counterparts.

Our new survey also finds lower levels of religious practice, by several measures, among Latino adults born since 1981. About three-in-ten (31%) say they attend religious services at least weekly, a percentage comparable to U.S. Millennials overall (29%) and lower than among Latinos overall (40%).

There has been significant religious switching by Latinos in the U.S. Among younger Latinos, much of that switching has been in the direction of becoming religiously unaffiliated – and most who have switched religions say that it happened while they were relatively young. Seven-in-ten U.S. Latino adults who have left their childhood religion say they switched before age 24.

A recent study conducted by Boston College researchers laid out the stakes for the future: “Much of the Catholic experience in the country during the next few decades will be signiﬁcantly shaped by how the Church reaches out” to Hispanics under age 18, the report said, “and whether young Hispanics in this age bracket, at least those growing up in Catholic households, decide to self-identify as Catholic.”