The Supreme Court will hear two cases this term about whether police can search the contents of a mobile device without a warrant.

The legal boundaries of technology and privacy have become more urgent to address as mobile connectivity has become central to Americans’ lives. According to the Pew Research Center 58% of adults own smartphones and 42% own tablet computers. Half of American cell phone owners have downloaded apps to their mobile devices.

Apps are pieces of software that allow users to interact with mobile services, from online banking, to news and games and driving directions. When they download apps, many users may not realize the apps collect information about them. The cases before the high court could clarify whether police searches of smartphones, including app content, without a warrant represent “unreasonable search and seizure” and violate citizens’ privacy in a new technological era. 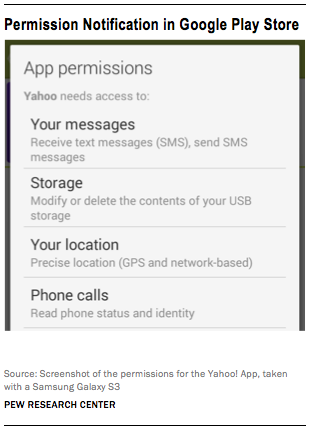 Apps are central to these cases because when a smartphone user downloads an app, the owner is usually prompted by the app to gain permission to access other information from the phone. For example, in the Android operating system, users are first presented with what information and features an app requires when they attempt to download an app. This information is organized into a list of “permissions.” Users must either accept the entire list, or decline to use the app. 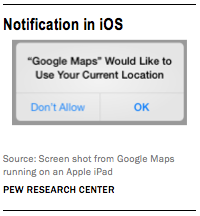 This method is sometimes referred to as “just-in-time” notification. In this case, if an app requires a user’s location information, the user is asked if they would allow the app to do that when the app first needs to. This is different from the Android, where the user is told on initial install that an app may need location information at some point.