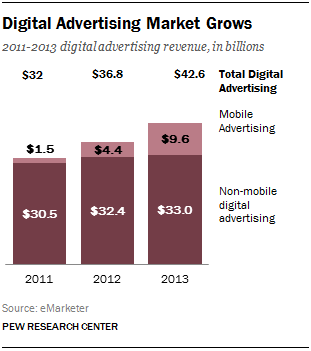 Digital advertising in the U.S. accounted for $42.6 billion in revenue in 2013, an increase of 16% over 2012, according to the financial analysis firm eMarketer. But while that digital ad pie is growing, the numbers show that news organizations are competing for an increasingly smaller share of those dollars.

While Google’s recent announcement of a 26% increase in ad volume in the first quarter of 2014 disappointed Wall Street investors who thought the number might be higher, it highlights the problem for the journalism business. Big tech companies that largely aren’t in the business of creating news content continue to dominate the digital ad space, often because they are able to reach much larger audiences than news organizations can.

In the first quarter of 2014, Google earned 90% of its revenue from digital advertising, and the ads that appear around Google search results remain its main source of that revenue. But display ads—which include banner ads and video ads that are increasingly critical to newsrooms’ revenue—are a growing part of Google’s ad business.  Google and other large tech companies are able to place display ads across a large network of websites and can target that advertising more effectively than a single website (or news organization) can.

Even so, news organizations need digital ad dollars as their legacy advertising revenue shrinks. New numbers from the Newspaper Association of America show that daily and Sunday print ad revenues in the newspaper industry fell another 8.6% in 2013.  Yet digital advertising among newspapers last year grew at only 1.5%, too slowly to balance out the print losses.  The association reports that digital ad revenue now represents 19% of overall newspaper ad revenue.