Yes, it’s that day again — the April 15 deadline for filing your taxes. Many of you are not sweating it because you’re among the almost 100 million Americans who had filed their returns as of April 4 or the estimated 12 million who have requested extensions, according to the IRS. (Last year, the IRS said 148 million returns had been filed.)

So whether you’re ahead of the game or not, here are five facts about Americans’ views of taxes and the IRS:

1  A third (34%) of Americans liked or loved doing their taxes, according to 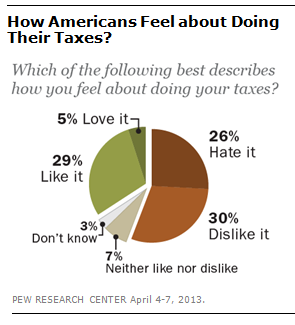 the survey we conducted at this time last year. Of course, that left 56% who didn’t like the annual exercise including 26% who hated doing their taxes. Among those who liked doing taxes, the largest share said it was to get a refund followed by those who said they didn’t mind or prided themselves for being good at. The IRS says the average refund so far this year is $2,792.

2 Americans, by a 52% to 42% margin, think their taxes are too high, according to a new Gallup poll. Those saying taxes are too high have hovered around that percentage for more than a decade. But prior to 2003 — before the tax cuts passed during the Bush administration — 69% had said the federal bite out of their incomes was too big. 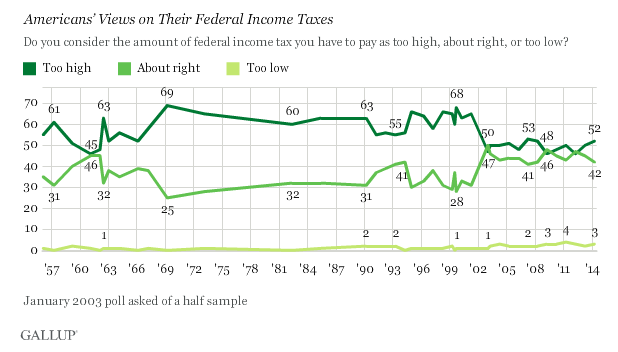 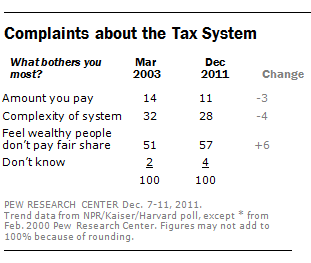 While many Americans may think taxes are too high, a majority of them (57%) say their biggest beef with the system is they feel the wealthy don’t pay their fair share, according to a Pew Research survey in 2011.  A CBS News poll conducted in January found yielded the same result: 57% of all those surveyed thought upper income Americans paid less than their fair share. 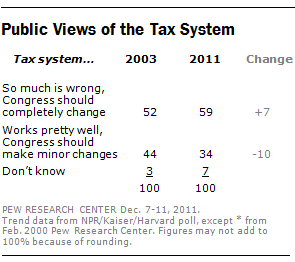 Six-in-ten (59%) of Americans say that so much is wrong with the tax system that Congress should completely change it, according to a 2011 Pew Research survey. Just about a third (34%) said the system worked pretty well and that only minor changes were needed. That view crosses partisan lines with 60% of Republicans, 55% of Democrats and 63% of independents calling for a broad overhaul.

5And last, but not least, the tax collector itself, the IRS, does not make Americans feel warm all over. We tested 13 government agencies in a survey last fall, and the IRS ranked at the bottom of the list with 51% expressing an unfavorable view of it while 44% regarded it positively. It was the only one of the agencies where a majority did not have a favorable view.