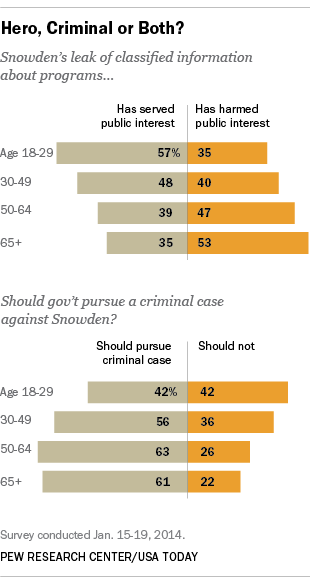 While the journalism world conferred its top honor yesterday to the newspapers that reported on Edward Snowden’s National Security Agency leaks, the public remains divided over whether those classified leaks served the public interest.

Yesterday’s top Pulitzer Prize, in the category of Public Service, was awarded to the teams at The Washington Post and The Guardian US. News coverage of the award compared it to the 1971 news coverage and Pulitzer Prize for exposing the Pentagon Papers. In response to yesterday’s prize announcement, Snowden released a statement saying the award was a “vindication” of sorts.

When The New York Times began publishing the Pentagon Papers in June 1971, a Gallup survey found that those who had heard of the articles were largely supportive of their publication, which revealed a more extensive involvement in Vietnam, Cambodia and Laos than the public had been aware. By a two-to-one margin, more said the Times and other newspapers did the right thing by publishing the articles (58%) than the wrong thing (29%). An age gap existed in 1971, too: 66% of adults younger than 30 said the newspapers did “the right thing,” compared with 49% of those 50 and older. It’s worth noting that the Pentagon Papers revealed government secrets that took place in the past, while the NSA revelations have put a spotlight on past and ongoing intelligence-gathering efforts.

Regarding the NSA surveillance program itself, the public’s views have changed since the summer. Our January survey showed that a 53% majority of the public disapproved of the program and 40% approved of it; last July, by comparison, more Americans approved (50%) than disapproved (44%) of it.