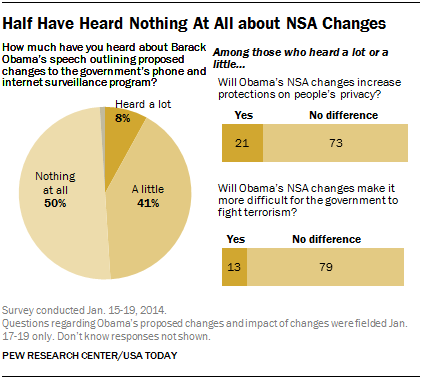 President Obama’s speech on Friday outlining changes to the National Security Agency’s collection of telephone and internet data did not register widely with the public. Half say they have heard nothing at all about his proposed changes to the NSA, and another 41% say they heard only a little bit. Even among those heard about Obama’s speech, few think the changes will improve privacy protections, or make it more difficult for the government to fight terrorism.

The new national survey by the Pew Research Center and USA TODAY, conducted Jan. 15-19 among 1,504 adults, finds that overall approval of the program has declined since last summer, when the story first broke based on Edward Snowden’s leaked information.

Today, 40% approve of the government’s collection of telephone and internet data as part of anti-terrorism efforts, while 53% disapprove. In July, more Americans approved (50%) than disapproved (44%) of the program. 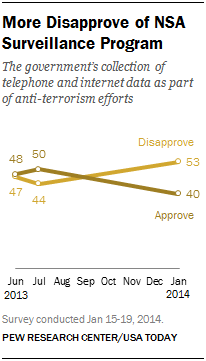 Overall, the public is divided about whether Edward Snowden’s leak of classified information, which brought the program to light, has served or harmed the public interest: 45% say it has served the public interest while 43% say it harmed it. Nonetheless, a 56% majority wants to see the government pursue a criminal case against Snowden, while 32% oppose this. This is little changed from June, shortly after Snowden’s first leaks of information about the program. 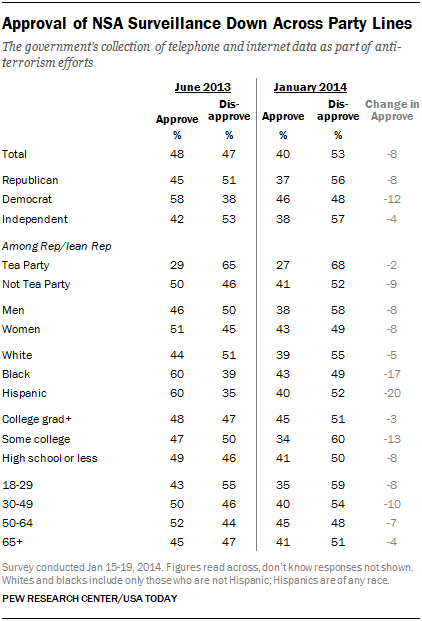 Democrats remain more supportive of the NSA surveillance program than Republicans, though support is down across party lines. Today, Democrats are divided (46% approve, 48% disapprove) in their view of the program. Last June, they approved by a 20-point margin (58% vs. 38%).

The decline in approval of the NSA surveillance program spans most demographic groups, though the drop in support is particularly evident among minority groups. Last June, 60% of both blacks and Hispanics approved of the government’s surveillance program. That has fallen to 43% among blacks and 40% among Hispanics today. Among whites, 39% approve of the program today, little changed from 44% in June. 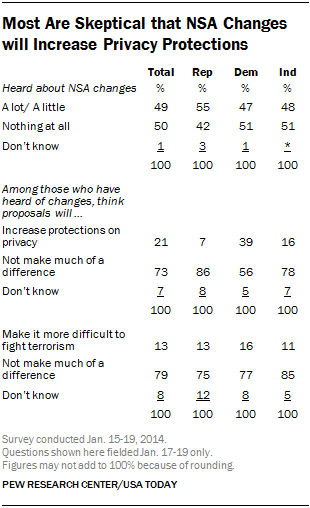 Obama’s proposed changes to the NSA’s data collection program did not register widely with the public. Just 49% say they heard about the proposed changes, with little difference across partisan groups.

Among those that did hear about the proposals, large majorities of Republicans (86%) and independents (78%) say these changes will not make much difference when it comes to protecting people’s privacy. Among Democrats who have heard of the changes, 56% say they won’t make much difference.

There is little concern that the changes to the NSA’s surveillance activities will hurt the government’s ability to fight terrorism. Overall, 79% of those who have heard about the proposals say they won’t make much difference in the government’s ability to fight terrorism; this view is shared by 85% of independents, 77% of Democrats and 75% of Republicans.

Prosecute Snowden, But Public Split on Impact of Leak 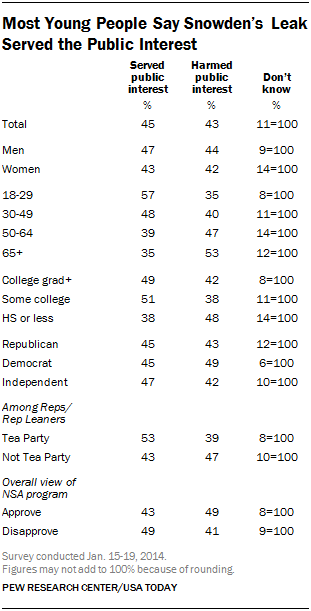 The public is split on whether Edward Snowden’s leaks served the public interest, with 45% saying they did and 43% saying the leaks harmed public interest. But by 56% to 32%, most think that the government should pursue a criminal case against Snowden. These opinions are largely unchanged from last June, when Snowden first disclosed classified information to news organizations.

There are no significant differences on this issue by party, as both Republicans and Democrats are divided.

Those who attended college are more likely than those who didn’t to see the leaks as serving the public interest. About half of college graduates (49%) and those with some college experience (51%) say this, compared with 38% of those with no more than a high school degree. 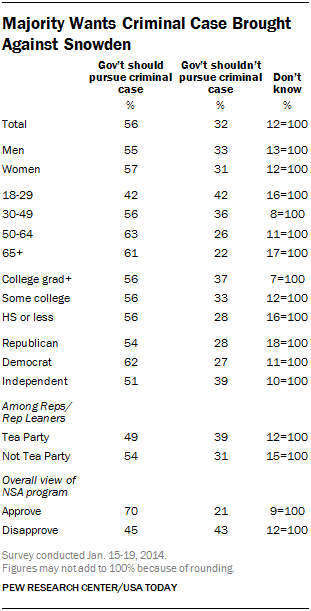 While most of the public wants the government to pursue a criminal case against Snowden, young people offer the least support for his prosecution. 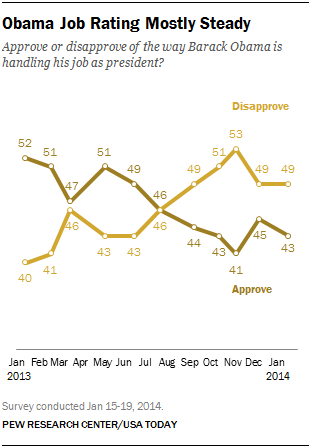 Barack Obama’s job approval rating has shown little change from last month. In the current survey, 49% disapprove of how he is handling his job and 43% approve. Obama’s ratings had steadily declined from May to November of last year, before he regained some ground in December.

In the last month, there have been no significant changes in partisan approval. About three-quarters of Democrats (77%) approve and 17% disapprove; among Republicans, 12% approve and 84% disapprove. Independents, on balance, continue to view his job performance negatively — 37% approve and 53% disapprove.