The debate about women’s participation in Afghanistan’s political process has intensified ahead of this weekend’s elections, in part due to the unusually high level of women’s involvement in campaigns. A record number of women are running for provincial council seats, according to the New York Times, and Habiba Sarobi is the first female vice presidential candidate on a leading ticket.

Sarobi, however, has reportedly received numerous death threats, and despite some visible gains for women’s rights – especially since the days of Taliban rule from 1996-2001 – surveys show mixed feelings among the Afghan public about women’s role in society. For example, there is a stark contrast between the share of Afghan women (60%) and men (35%) who support equal representation for men and women in elected government positions, according to a 2013 survey of Afghans conducted by The Asia Foundation. 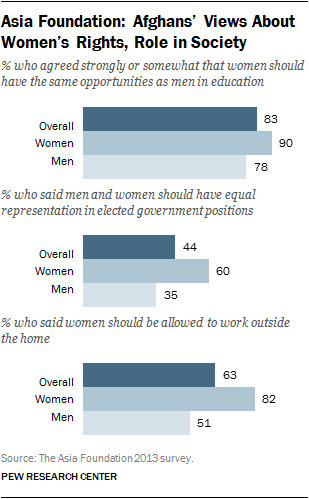 On one hand, 90% of Afghans in that survey agreed that everyone should have equal rights under the law (regardless of gender), and 83% agreed that women should have the same opportunities as men in education – including a strong majority (78%) of Afghan men. (The survey also found that 76% of Afghan women have received no education, an area Sarobi cites as a key priority.)

Among those registered to vote in Afghanistan, only 35% are women, the New York Times reports. And just 45% of Afghan men in The Asia Foundation survey said that women should decide themselves for whom to vote (compared with 62% of women). Nearly half (46%) of Afghans overall said that men should have some role in how women vote, either by advising them (25%) or by consulting with them before they decide (21%).

A Pew Research survey of Muslims in 39 countries conducted in 2011 in Afghanistan found that Afghan Muslims – nearly 100% of the population – are very conservative on women’s issues relative to Muslims in other nations.

In our survey, only 30% of Afghan Muslims (including 40% of women) said women should decide if they wear a veil, among the lowest levels of support for this in the countries surveyed. A similar share (30%) said sons and daughters should have equal inheritance rights, and nearly all Afghan Muslims (94%) said they completely or mostly agreed that a wife must always obey her husband.