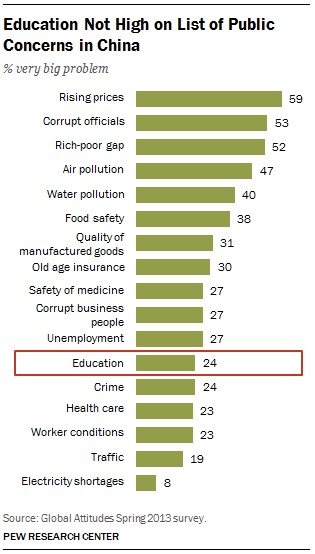 First Lady Michelle Obama heads to China this week on a trip intended to focus on the importance of education, as well as a visit with Madame Peng, the spouse of China’s President Xi Jinping.

Given other economic and environmental problems, however, education is not high on the minds of the Chinese public. In our 2013 survey, only 24% in China said education was a very big problem, which lagged far behind those who identified rising prices (59%), corrupt officials (53%) and the gap between the rich and the poor (52%) as major problems. However, the issue has picked up steam since 2008, when only 11% said education was a very big problem.

The focus on education issues, and not the politically sensitive topic of human and women’s rights in China, has drawn some attention from scholars who point out that First Lady Hillary Clinton met some of these issues head on in her 1995 visit to Beijing. And in fact, the issue of China’s human rights record remains a concern held by people across the globe.

In spite of China’s growing economic and military power, its international image still lags behind that of the United States. And when the Pew Research Center surveyed people last year in 38 countries, asking them if China respects the personal freedoms of its people, a median of only 36% said yes.

Nevertheless, the issue of human rights does not resonate much with the American public. In a 2012 survey, only 48% of Americans saw China’s policy on human rights as a very serious problem, far behind concerns about economic issues between the two countries.