On Feb. 7, the XXII Olympic Winter Games will open in Sochi on Russia’s Black Sea coast. Nearly six-in-ten Americans (58%) say they’re looking forward to the Winter Olympics, making it among the most anticipated 2014 events we asked about. And while intentions may not always line up with actions, the Olympics finding is in line with the share of Americans who’ve said they’ve closely followed previous Games.

Since the 1992 Winter Olympics in Albertville, France, the Pew Research Center has covered five summer and three winter games as part of its regular news interest surveys, in which we ask whether people are following various news events and, if so, how closely. Overall, the level of Olympics interest varies within a clear range: More than half but less than two-thirds say they’ve followed that year’s Games “very” or “fairly” closely, with the average interest level slightly higher for Summer Games. (For this exercise, we considered only surveys conducted during or shortly after the Games; when more than one survey was conducted we took the highest interest level.) 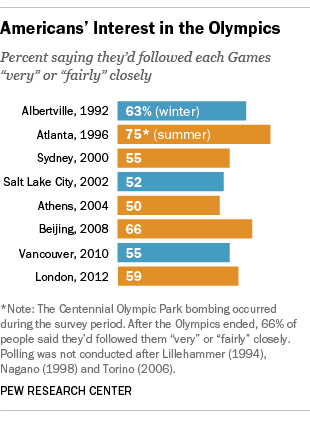 The two exceptions were the 1996 (Atlanta) and 2004 (Athens) Summer Olympics. In 1996, the bombing at Atlanta’s Centennial Olympic Park occurred during our initial survey period; perhaps not surprisingly, 75% of people said they were following the Games closely — including 45% who said they were following them “very” closely, the highest interest level for any Olympics. In a follow-up survey in early September, a month after the Games concluded, interest had fallen back to 66%.