With several major technology companies pushing back against the U.S. government’s phone and internet surveillance measures, Americans remain deeply divided about the programs’ effectiveness and desirability.

In the past several months Americans have learned much about the government’s secret surveillance programs — including tapping into Google and Yahoo’s data-center communications links, tracking the locations of hundreds of millions of cellphones worldwide, and collecting phone records on millions of calls directly from telecom companies. 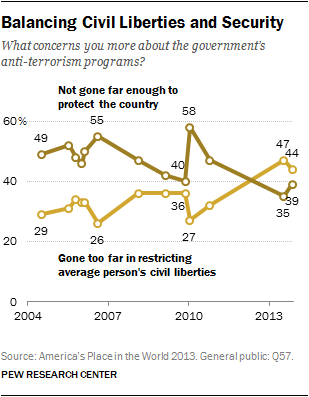 In addition, a growing share of Americans today are worried that government anti-terrorism programs are infringing on civil liberties. In the Pew Research survey, 44% said the government’s policies have gone too far in restricting the civil liberties of average people, up from 27% in January 2010. By contrast, 39% said in the latest survey that they were mainly concerned that government policies haven’t gone far enough to protect the country, down from 58% who said that in January 2010.