One of the complexities of the new health care law is that its provisions do not all take effect at one time. Some elements of the law started kicking in after its passage in 2010, and will continue to roll out until the last one – a tax on high-cost insurance – is implemented in 2018. (The Kaiser Family Foundation has an interactive Health Reform Implementation Timeline). 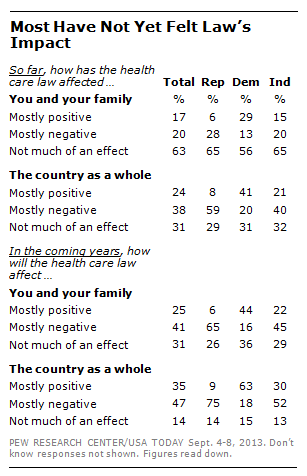 Now, more than three years after its passage, some of the law’s most important provisions will be taking effect. On Oct. 1, health consumers will be able to shop for coverage on online health insurance exchanges for policies that would take effect next year, when the individual mandate requiring Americans to have insurance takes effect.

One result of the long phase-in, and the fact that major elements of the Affordable Care Act are just now about to become reality, is that a majority of Americans (57%) still say they do not have enough information to understand how the law would impact them, according a Kaiser Family Foundation survey conducted in March. Kaiser said that “public knowledge of the ACA’s provisions has not increased since 2010, and awareness of some key provisions has declined somewhat since the law’s passage when media attention was at its height.”

Another result is that, while the fight over the ACA goes on, 63% of Americans say they have yet to see much of an impact from the law on themselves or their family, according to a Pew Research Center survey conducted in early September.