The release of Chromecast by Google last month is only the latest effort by tech companies to make sure all those smartphones, laptops, and tablets you’ve bought are properly connected and streaming. Some experts envision device owners living in a programmable world in which everything from the coffee pot in your house to the temperature in your office are all personalized and integrated.

But there is one segment of the population who would see no benefit in services like these – people who own only one device.

In April 2012, the Pew Research Center measured ownership of five different types of computing devices—cell phones, desktop computers, laptop computers, e-readers, and tablet computers—and found that one in ten Americans (13%) only owned a cell phone and none of the other four devices. Seniors, non-whites, those with less than a college education, and those living in households with an annual income of less than $50,000 a year were especially likely to say that they owned only one of these five devices, and that the device they owned was a cell phone.

Cell phones were the most popular device in April 2012, followed by laptops, desktop computers, tablets, and e-readers. At that time: 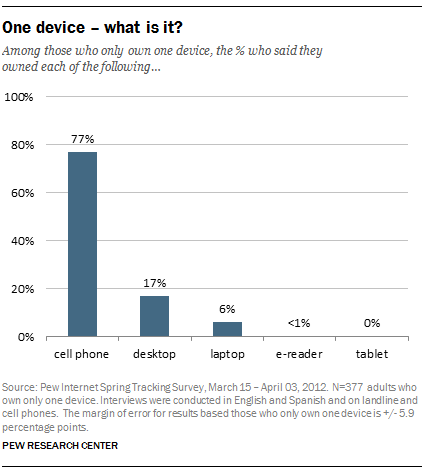 As tablet computers and e-readers have grown in popularity, the proportion of Americans who own four or more computing devices has increased. In May 2010, just 4% of Americans owned four or five of the devices we measured; by April 2012, that figure had risen to 20% of all Americans.