Years of warnings about low test scores and underperforming schools seem to have had an impact on the U.S. public. A solid majority of Americans wanted parents to put more pressure on children to perform well academically. 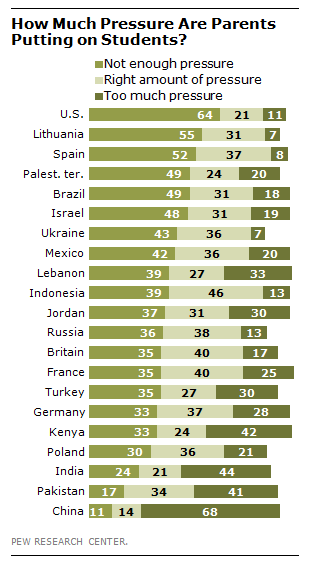 Globally, Americans stand out on this question. Among 21 nations polled, the U.S. had the highest percentage saying parents should apply more pressure.

Views were quite different in China, the only country where a majority (68%) said parents put too much pressure on their children to succeed in school. The Chinese education system’s intense focus on test-taking has received a fair amount of attention in recent years, especially after Shanghai students topped the rankings for math, science, and reading on the 2009 Program for International Student Assessment (PISA) exam. But apparently many Chinese believed the long hours of test prep – according to the OECD 80% of Shanghai students have after school tutoring – were a bit too much.