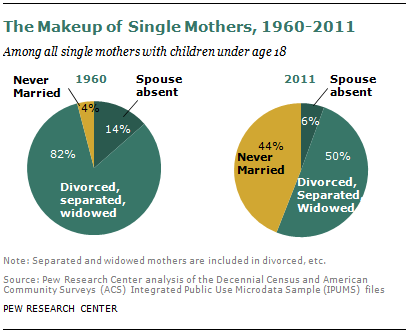 Today’s single mothers are much more likely to have never been married than were their counterparts in the past.

By 2011, the share of single mothers who had never been married had reached 44%, while half of all single mothers were divorced, separated or widowed, and 6% had an absent spouse.

These patterns are tied to broader long-term trends in non-marital births and divorce. According to data from the National Center for Health Statistics (pdf), the share of births to unmarried women rose to 41% in 2010 from 5% in 1960. And a recent Census Bureau report (pdf) shows that in 2011, 36% of mothers who gave birth in the preceding year were unmarried; a majority of these women (87%) had never been married.

The share of mothers who are divorced, separated or widowed increased in the 1960s and 1970s and has remained relatively stable since 1980, hovering around 12% to 13% in the past three decades.

In the past five decades, the share of never married mothers among all families with children has increased from less than 1% to 11%.

5 facts about the modern American family

More evidence of preference for sons

Divorce Better for Children than Living with Unhappily Married Parents