From the fervid coverage in the national press, replete with terms like “nuclear option,” “meltdown” and “showdown,” you might think the country is riveted to the clash between Senate Democrats and Republicans over filibuster rules.

But with the two sides set to gather tonight in the ceremonial Old Senate Chamber in a last-ditch effort at a compromise on limiting debate on presidential nominations, past research — though admittedly spotty — suggests that Americans may not be paying much attention, and that many may not have a clear idea as to what the controversy is about. (To address that, check out this concise primer on filibusters by University of Miami political scientist Gregory Koger, who has literally written the book on them.)

In January 2011, the most recent time Pew Research asked people how much they’d heard about proposals by the Senate’s Democratic leadership to change the filibuster rule, nearly half (49%) said they hadn’t heard anything at all; more than a third (36%) said they’d heard only a little bit. That was down considerably from March 2010, when at the height of debate about the Affordable Care Act — and Republican threats to filibuster the healthcare-reform legislation — fully a third of Americans told an NBC News/Wall Street Journal poll that they’d heard “a lot” about filibustering, and another 26% said they’d heard “some” about it. 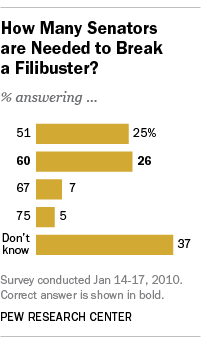 In January 2010, when Pew Research asked how many senators are needed to break a filibuster, only about a quarter (26%) knew the correct answer, 60. Almost as many thought only 51 votes were needed — in fact, the rules change that Senate Majority Leader Harry Reid is threatening to adopt, at least in regard to presidential appointments — while more than a third (37%) wouldn’t even venture a guess.

Bonus fact: A “filibuster” originally was a military adventurer, usually American or European, who tried to take over a Latin American or Caribbean country (William Walker being the best-known); the term derives from the same Dutch word that gave us “freebooter.”