In recent years, there has been a decline in the percentage of Americans who think that more gays and lesbians raising children is a bad thing for American society. 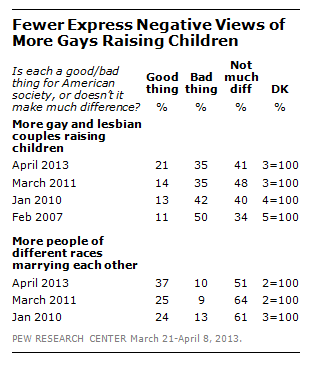 The public also takes a more positive view of another social trend – more people of different races marrying each other. Currently, 37% say this is a good thing for American society, up from 25% in 2011 and 24% in 2010. About half (51%) say more interracial marriage does not make much difference, compared with 64% in 2011 and 61% in 2010. About one-in-ten (10%) continue to view this as a negative trend for American society. Read more