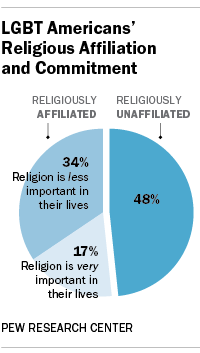 Lesbian, gay, bisexual and transgender adults are generally less religious than U.S. society as a whole, a recent Pew Research Center survey found. About half (51%) declare any religious affiliation at all, versus close to eight-in-ten U.S. adults; about a fifth (17%) are both religiously affiliated and say religion is very important in their lives, compared with just over half (54%) of the general public.

Nearly four-in-ten (38%) of those “more religiously committed” LGBT adults are evangelical Protestants, while a quarter (24%) are mainline Protestants and one-in-five (20%) are Catholic. 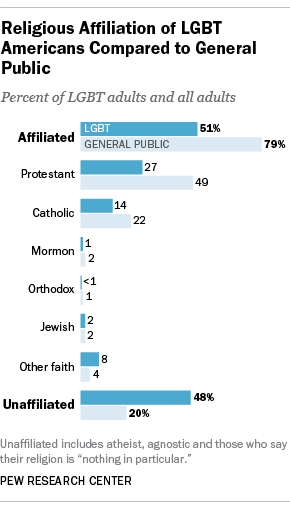 Some LGBT adults say they feel a conflict between their religious beliefs and their sexual orientation or gender identity. Among LGBT evangelical Protestants, for instance, 47% say they feel such a conflict. That may be because evangelical churches by and large disapprove of homosexuality: The National Association of Evangelicals, for example, calls it “a deviation from the Creator’s plan.”

“Coming from a strong evangelical Christian upbringing, and still applying that to my life, it’s been difficult,” said one 28-year-old lesbian who took part in our survey. “A lot of people (some or most of my family included) don’t approve or want to have anything to do with it, and choose to ignore my partner.”

By contrast, only a fifth of mainline-Protestant LGBT adults feel there’s a conflict between their beliefs and their sexuality. Many (but not all) mainline denominations are at least tolerant of homosexuality, if not openly welcoming: The United Church of Christ, for instance, has supported same-sex marriage rights since 2005.

Nonetheless, some respondents identified tensions even in avowedly “gay-friendly” churches. One 49-year-old lesbian told us she was a youth leader in her church, which permits lesbians and gay men to be ordained. But, she said, she hasn’t come out to anyone at her church (though she suspects both pastors have guessed) because “it would be an issue for some people in the church and I’m not ready to open that can of worms.”

Religiously unaffiliated people more likely than those with a religion to lean left, accept homosexuality

Lesbian, gay and bisexual Americans are more critical of churches than straight adults are

Rift over gay rights comes as United Methodists in U.S. have become more accepting of homosexuality