Most Americans don’t know that the immigration bill now being debated in Congress was introduced by a group of Republican and Democratic senators or that the bill stipulates that unauthorized immigrants be allowed to stay in the country while applying for citizenship.

In an April survey, respondents were asked the two questions, about the bill’s sponsorship, and what it means as far as unauthorized immigrants being able to stay in the U.S. Just 24% of the public correctly answered both knowledge questions, 35% got one question correct while 41% answered neither question correctly. 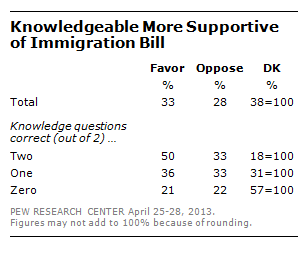 People who are relatively knowledgeable about the immigration bill — those able to answer both questions correctly – favor the legislation by 50% to 33%. Those less knowledgeable are more evenly divided.

The partisan differences in views of the immigration bill are wider among those who are aware that the bill allows unauthorized immigrants to stay in the U.S while applying for citizenship. Generally, Democrats who are knowledgeable about the bill support it by wide margins, while the legislation draws much less support from knowledgeable Republicans. Read more