A record 11.2 million Latinos voted in the 2012 presidential election, but Latinos’ voter turnout rate continues to lag other groups significantly, according to an analysis of new Census Bureau data by the Pew Research Center.

The record turnout helped Latinos account for a larger share of the nation’s electorate last year, making up a record 8.4% of all voters, up from 7.4% in 2008. However, while 11.2 million Latinos voted in 2012, an even greater number — 12.1 million – eligible voters chose not to vote. 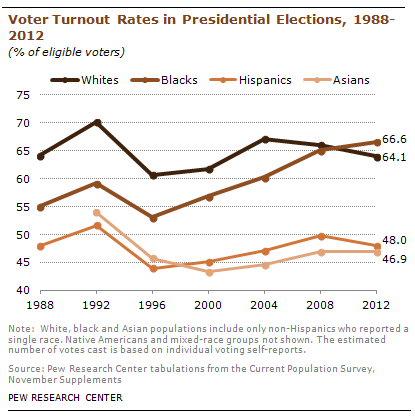 The analysis also finds that voter turnout rates differed widely among Latino demographic subgroups. In 2012, the highest voter turnout rates were among those with a college degree (70.8%) and among Cuban-origin Latinos (67.2%). Meanwhile, the lowest were among those ages 18 to 29 (36.9%) and those with less than a high school diploma (35.5%). Read more