A new government report says designs for more than two dozen advanced weapons systems have been compromised by Chinese hackers, further raising concerns about what government and industry leaders say is an organized cyber-spying by China against U.S. defense contractors and government agencies. 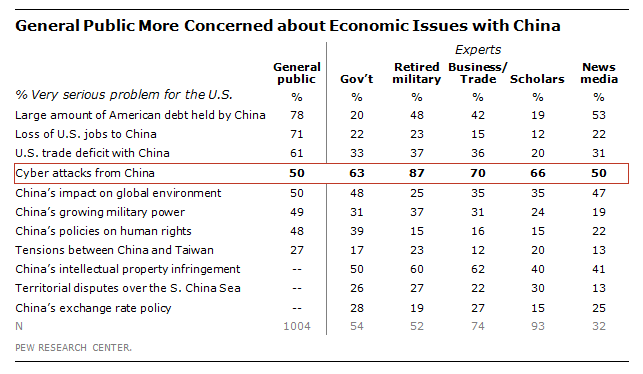 While reports of such electronic espionage have become more frequent, experts have been more concerned about Chinese hackers trying to obtain military and industrial secrets from U.S. firms. In a Pew Research survey last year, 87% of retired military officers called cyber attacks from China a serious problem for the United States, as did 70% of business leaders — higher than any other issue in Chinese-American relations. (Intellectual-property infringement came in second, with 62% of business leaders and 60% of retired military calling it a serious problem.)

Close to two-thirds of academics (66%) and government officials (63%) surveyed also said Chinese cyber attacks represented a serious threat. But only 50% of the general public rated Chinese hacking that high on the threat list; most people were far more concerned about economic issues, such as the amount of U.S. debt held by China (78%) and the loss of American jobs to China (71%). Read more

Most Americans See China as a Competitor
Americans Concerned about Size of U.S. Debt Owed to China
Americans leery of China as Trump prepares to meet Xi at G20
Four-in-ten Chinese see U.S. military presence in East Asia as a threat
6 facts about how Americans and Chinese see each other