The sharp drop in teen birth rates, especially among Hispanic teens, appears to be linked to both economic and attitudinal factors. 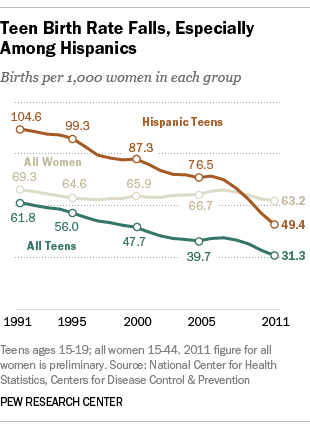 A Pew Research Center state-level analysis from 2011 found that birth rates tracked the faltering economy: States that experienced big economic declines in 2007 and 2008 tended to have large fertility declines in 2008 and 2009.

And as that report noted, Hispanics, who were hit hardest by the recession in terms of employment and wealth, also have experienced the largest fertility declines since the onset of the recession. According to the latest CDC report, the Hispanic fertility rate fell by 18% between 2007 and 2010, versus a 4% decline for non-Hispanic whites and a 7% drop for non-Hispanic blacks.

For Hispanic teens, behavior may be aligning more closely with their views of teen pregnancy. A 2009 Pew Research survey found that Hispanics ages 16 to 19 took a dim view of people their age having children: Three-quarters called teen pregnancies “a bad thing for society,” and seven in ten (69%) agreed that becoming a teen parent prevents people from reaching their goals in life. (Among young adults, ages 18 to 25, 76% of Hispanics called teen pregnancies bad for society, versus 90% of all 18- to 25-year-olds.)

Overall birth rates have continued to drop through the tepid recovery: Among  all women of childbearing years, the rate has fallen from 69.3 births per 1,000 in 2007 t0 a preliminary 63.2 in 2011. That may represent a lag between statistical indicators of recovery and people believing their own lives are improving: Previous research suggests that while people put off having children during economic downturns, they “catch up” once conditions improve.