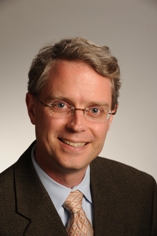 Washington (November 15, 2012) — Pollster Michael Dimock, currently Associate Director for Research, will succeed Andrew Kohut as Director of the Pew Research Center for the People & the Press, which conducts surveys on politics and public policy and is the flagship project of the Pew Research Center, a nonpartisan fact tank that provides neutral data and analysis to inform the public, the press and policymakers.

A 12-year Pew Research veteran, Dimock has been the co-author of several of the center’s landmark research reports, including its in-depth examination of American political and social values and its polling reports from the last several presidential cycles. He received his Ph.D. in political science from the University of California-San Diego and his B.A. in Political Science from the University of Houston. Before joining the Pew Research Center staff in 2000, he was a political science professor at North Carolina State University in Raleigh, NC. He has published multiple articles on public opinion, voting behavior and survey methodology. He also has appeared as a survey analyst on numerous media outlets and has served as a regular election night analyst for NPR.

“Michael Dimock, who has worked closely with me for a dozen years, is a careful and incisive analyst who will ensure that the Pew Research Center’s polls continue to provide comprehensive and accurate reporting of American public opinion,” Kohut said.

In an email to staff announcing the move, Kohut congratulated Pew Research pollsters, including Dimock, Associate Director for Editorial Carroll Doherty and Director of Survey Research Scott Keeter, for once again accurately predicting the popular vote in its final election estimate. “I am pleased that our rigorous approach provided the public with high-quality, unbiased information during this election. And I have the utmost faith that with the leadership of Michael, Carroll and Scott, Pew Research will continue our tradition of excellence in public opinion reporting.”

“I’ve been privileged to have Andy Kohut as my mentor in tracking the shifting landscape of public opinion,” Dimock said. “I’m honored to take on this new role and continue the Pew Research Center’s important work of helping the public and its leaders understand what Americans think about the big issues facing our nation.”

The new announcement follows the recent appointment of veteran journalist Alan Murray as Kohut’s successor as President of the Pew Research Center. Dimock will report to Murray, who will supervise the center’s overall agenda, including research on politics, religion, demographics, media, technology and international polling. Both Dimock and Murray will begin their new positions in January 2013. Kohut will stay on as Founding Director, continuing to provide counsel to the Center for the People & the Press and direct the Pew Research Center’s Global Attitudes Project in 2013.

The Pew Research Center for the People & the Press is the flagship project of the Pew Research Center, a nonpartisan fact tank that marries the storytelling skills of journalism with the methodological rigor of social science. The project is best known for its election research, its long-term examination of trends in fundamental political and social values and its examination of trends in media consumption. It has its origins in a polling project created in the 1980s by the Times Mirror newspaper company and called the Times Mirror Center for the People & the Press. In 1996, The Pew Charitable Trusts became the center’s sponsor.

About the Pew Research Center: Pew Research Center is a nonpartisan fact tank that provides information on the issues, attitudes and trends shaping America and the world. It does not take positions on policy issues. The center is a subsidiary of The Pew Charitable Trusts.