Q.In the 2010 census, was proper care taken to record Americans only once? Many of us have winter homes in the South, and there are also houses owned by Canadians who were still in residence down here on April 1, but probably shouldn’t be counted since they are visitors.

Census Bureau rules state that people are to be counted in their “usual residence” as of April 1, meaning the place where they live and sleep most of the time. After the 2000 Census, analysis by the Census Bureau suggested that the U.S. population may have been over-counted for the first time in history because of the many people who were tallied more than once. Because of the many duplicate enumerations resulting from people who were counted in two different homes (“households,” in census parlance), the Census Bureau invested extra effort and publicity in trying to avoid this type of error in the 2010 Census. Snowbirds — people who live in cold states or other countries for most of the year, but move to warm states for the winter — were one focus of this effort.

One major step the bureau took was to add a screening question to the 2010 Census form, asking whether each person in the household sometimes lives or stays somewhere else; if the answer was yes, the form included individual check-boxes for “in college housing,” “in the military,” “at a seasonal or second residence,” “for child custody,” “in jail or prison,” “in a nursing home” and “for another reason.” Census Bureau staff planned to contact households for follow-up if the screening question raised a red flag.

Here’s the question as it appears on the interactive version of the 2010 census form. 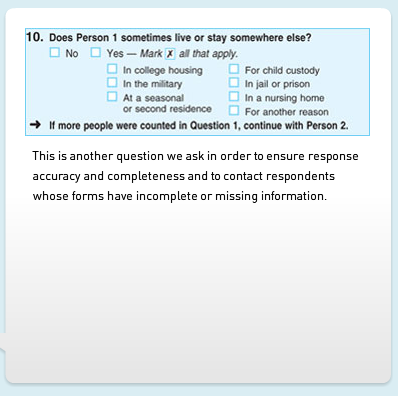 The Census: College Students Count -- but Where?
Imputation: Adding People to the Census
How Many Hispanics in the U.S.?
State Population Estimates and Census 2010 Counts: Did They Match?
Ask the Expert (cont’d)