“Woman is a flower for the man to look after…. [She should not] spoil it and mingle in his affairs.” Mrs. Rehm, Douglas Park, Chicago, Ill., 1923 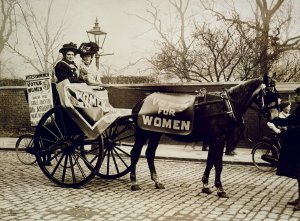 In the year 1980, 59.4% of voting-age U.S. women cast ballots in that fall’s presidential election. According to the Bureau of the Census, they were joined by 59.1% of voting-age men. That comparison is noteworthy because, 60 years after passage of the 19th Amendment granted them the franchise, it marked the first time in U.S. history that American women turned out in equal proportion to their male compatriots.1 What took them so long?

The Census Bureau didn’t track voter turnout prior to 1964 so we don’t really know the pace at which most women acquired the voting habit. But the recent serendipitous rediscovery2 of what was surely among the earliest survey-based analyses of voting-booth avoiders, makes it possible, with appropriate caveats, to examine the factors that made many female Americans slow to appreciate the fruits of the 70-year battle fought by U.S. suffragettes such as Elizabeth Cady Stanton, Lucretia Mott and Susan B. Anthony.

The study in question3 was published in 1924 by two researchers at the University of Chicago, Professor of Political Science Charles Edward Merriam, and Harold Foote Gosnell, then an instructor in the same department. Years before the fielding of the first statistically representative national opinion polls, the authors aimed through a carefully designed and deployed door-to-door survey to provide a “preliminary approach to the study of political motives.” Their target population was that one-half of the voting-age adults in Chicago who failed to cast a ballot in the mayoral election held on April 3, 1923.

The researchers took care to determine that their 6,000 survey respondents were reasonably similar in pertinent demographics4 to the 740,000 non-voters city-wide, including representative samples of both men and women as well as recent and second-generation immigrants and blacks. They warned, however, that some conditions prevailing in the Chicago of April 1923 might be peculiar to that time and place: “Care must therefore be taken in generalizing too broadly from the data or conclusions assembled in this study.”

Still, most of the reasons for non-voting given by male respondents in the 1923 survey bear a remarkable similarity to patterns observed in national mid-term polls dating to the present day. (See, for example, a survey of voters and non-voters conducted by the Pew Research Center in the fall of 2006.) And in this regard, there is some assurance that their findings with respect to the women in their sample may well have been representative of the sentiments prevailing in the larger country, at least at that time.

So why didn’t an estimated 65% of the women of Chicago find their way to the polls on Election Day 1923?

In that year, female suffrage was still a nearly new phenomenon nationally, the 19th Amendment to the U.S. Constitution having been enacted three years earlier. The women of Chicago, however, had been enfranchised several years earlier in 1913.

Still, federal census data and local voting records showed that female Chicagoans were far less likely to have visited the polls on Election Day than were men in both the 1920 presidential election (46% vs. 75%) and the 1923 mayoral contest (35% vs. 63%). In the researchers’ sample of non-voters, women outnumbered men by more than two to one.

The most frequent primary reason for failure to exercise their franchise, cited by 32.8% of the female respondents, was general indifference to politics or to the particular election that year (17.2% of men gave the same explanations.)

As might be expected, women were less likely to cite business factors, such as possible loss of wages (but 11 women sampled mentioned reluctance to disclose their age as required for voter registration).

But two factors shown in the table reproduced from the study report, catch the eye: “Disbelief in woman’s voting” and “Objections of husband.”

Blaming Suffrage for Prohibition — and Much More

The first of these explanations — cited by about 500, or 11.4%, of the women interviewed as the controlling factor in their failure to vote — was most frequent among non-voters of German extraction, especially among relative newcomers. Irish and Italian women were also more prone to express anti-suffragist beliefs. In the opinion of one woman of German parentage living in a precinct west of Washington Park, women voters already had much to answer for: “I cannot understand why women should vote. The country is much worse since women were given the right to vote. Since woman suffrage, we have prohibition.”

In that same vein, a Mrs. Casey, age 53, living in a “congested Irish precinct south of the Stockyards,” declared that her husband “got drunk on moonshine and beat her so she left him.” This misfortune, as well as a host of other political evils, she blamed on woman suffrage.

However, the researchers note, “a respectable proportion of white women of native parentage” also expressed anti-suffragist views. Mrs. Spalding, living in “a $90-a-month apartment just outside a very wealthy section,” was apparently emphatic in asserting that “I’m a lady and I do not want to be anything else but a lady. I was raised in Virginia and promised mother not to break any of my promises. Mama always thought politics was men’s business.”

As might be expected, older women were more likely than young women to be dubious about the wisdom of allowing women to express their political preferences. In the view of one elderly Irish woman, “Women have no business voting. They would be better off staying at home and minding their own affairs.” (Men’s feelings on this and the following point were not enumerated.)

Many fewer women said they were deterred from voting by their husband’s objection. The authors note, however, that these women may be judged different from their anti-suffragist sisters in that their attitudes are “strongly tinged with a fear complex. As one woman tersely put it: ‘I am not looking for a divorce.'”

From these observations, the Chicago academics concluded that “it was obvious that there were thousands of women in the city who still believed that woman’s place was in the home … that woman is a flower for man to worship and that she should not spoil her beauty by mingling in his affairs …”

Or, as one middle-aged Irish woman living on the South Side put it, “women will run, then ruin the world.” The accuracy of this prediction has yet to be tested.

3. Merriam, Charles Edward and Harold Foote Gosnell, Non-Voting: Causes and Methods of Control, The University of Chicago Press, August 1924. A separate manuscript, “Getting Out the Vote”, authored by Gosnell, provides similar findings from a study of non-registered but eligible voters prior to the 1924 presidential election.

4. The “social data” compared, collected from official government and commercial sources as well as from the survey itself, included age, sex, “color,” country of birth, nationality, economic status, occupation, length

Black Americans Have a Clear Vision for Reducing Racism but Little Hope It Will Happen
Reluctant Suffragettes: When Women Questioned Their Right to Vote
Blaming Suffrage for Prohibition -- and Much More