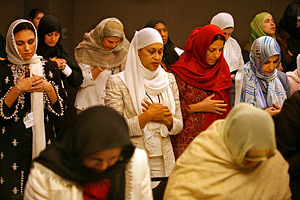 Although Muslims constitute a small minority in the United States, and their holy book and many of their religious rituals are distinctly their own, Muslim Americans are by no means “the other” when it comes to religious life or politics in the United States. In many ways, they stand out not so much for their differences as for their similarities with other religious groups.

In their level of religious commitment, Muslim Americans most closely resemble white evangelicals and black Protestants. In their basic political orientation, they closely resemble black Protestants as well as seculars. When it comes to their views on some social issues, such as homosexuality, Muslims’ conservatism matches that of white evangelicals. Muslims are even more likely than evangelicals or any other group to support a role for government in protecting morality.

Muslims account for less than one percent of the country’s population, whereas eight-in-10 Americans are Christian. Recent public opinion surveys by the Pew Research Center find that, with respect to the intensity of their religious beliefs, Muslim Americans most closely resemble white evangelicals and black Protestants. Within all three groups, large majorities (72% of Muslim Americans, 79% of white evangelicals and 85% of black Protestants) say religion is “very important” in their own lives. Those notably high percentages set all three groups apart from Catholics (49%) and white mainline Protestants (36%).

Half of Muslim Americans (50%) view the Koran as the word of God to be taken literally, word for word. Majorities of both white evangelicals (66%) and black Protestants (68%) hold a similar view of the Bible. Among Catholics and white mainline Protestants, by contrast, far fewer than half (25% and 22%, respectively) take a literal view of the Scriptures.

None of this is to suggest that Muslims and Christians do not have distinctly different religious beliefs and practices. Nevertheless, the resemblance in religious intensity of Muslims to many groups that might think of themselves as wholly unlike Muslims is striking.

Though white evangelicals share similarities with Muslims with respect to religious intensity, the two groups are very different when it comes to their respective political orientation. Muslim Americans, simply put, are far more politically liberal than evangelicals, and more similar in their basic political outlook to black Protestants, secular Americans and, in some instances, white mainline Protestants.

Among Muslims, only 11% say they are Republicans or lean Republican; the figure is similar (10%) among black Protestants. Among white evangelicals, the percentage of Republicans (57%) is more than five times higher – making them, by this measure, the group that is most unlike Muslim Americans.

About six-in-10 Muslims say they are either Democrats or lean Democratic, roughly the same proportion as among secular Americans. Black Protestants are even more heavily Democratic than Muslims, while white evangelicals are substantially less Democratic.

The largest numbers of Muslim Americans define their political ideology as “moderate,” as is the case with most other groups. The “moderate” category includes 38% of Muslims, 40% of seculars, 41% of black Protestants, 44% of white mainline Protestants and 46% of white Catholics. White evangelicals break this pattern, with the largest number identifying themselves as conservatives (55%), ahead of moderates (30%).

These partisan and ideological preferences were reflected in the 2004 presidential election. Aggregation of the 50 state exit polls conducted by the National Election Pool shows that more than eight-in-10 Muslim voters (85%) supported John Kerry in 2004. This makes Muslims similar to black Protestants (86%) in their support for Kerry, and somewhat more heavily Democratic in their vote than Jews (74%) and secular voters (67%).

The Proper Role of Government

Despite their relatively liberal political orientation, Muslims by no means take liberal positions on all issues. On social issues, they are more similar to white evangelicals. About 60% of Muslim Americans, for instance, say that homosexuality should be discouraged, a figure close to that recorded among white evangelicals, and substantially higher than among other groups.

Muslims also stand out from other groups on the issue of immigration, perhaps in part because two-thirds (65%) of Muslim Americans are first-generation immigrants themselves. When asked whether immigrants strengthen or burden the country, for instance, nearly three-in-four Muslims say immigrants strengthen the country. This pro-immigrant sentiment is much higher than that seen among other religious groups. (Catholic Hispanic Americans – another group that includes a high percentage of first-generation immigrants – are the exception. Asked a slightly different question in an earlier Pew survey, two-thirds of Catholic Hispanic Americans said that growing numbers of immigrants strengthened American society.)