The data in this report come from two surveys: a survey of 10,682 U.S. adults ages 18 and older conducted using Pew Research Center’s American Trends Panel (ATP) and a survey of 920 teens ages 13 to 17 conducted using the NORC AmeriSpeak panel, for a combined sample size of 11,602. 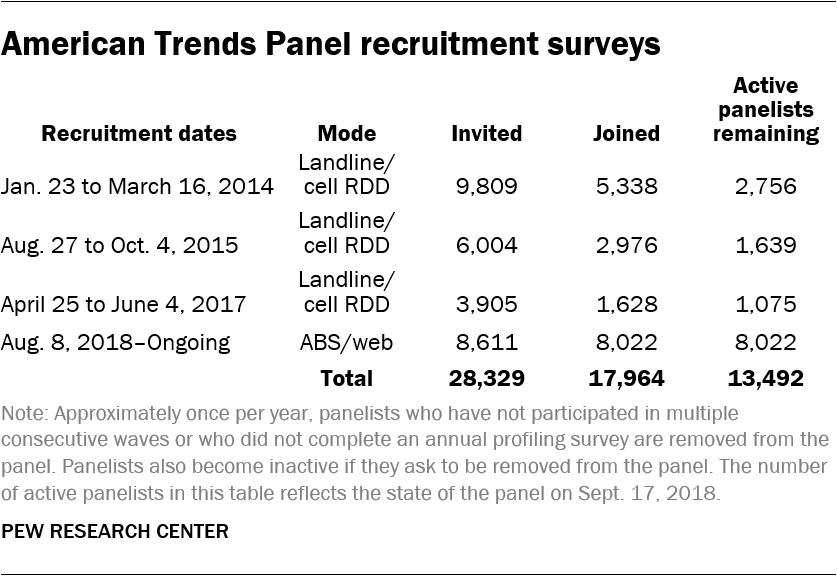 The ATP, created by Pew Research Center, is a nationally representative panel of randomly selected U.S. adults. Panelists participate via self-administered web surveys. Panelists who do not have internet access at home are provided with a tablet and wireless internet connection. The panel is being managed by Ipsos.

Data for adults ages 18 and older in this report are drawn from the panel wave conducted September 24-October 7, 2018. A total of 10,682 panelists responded out of 13,492 who were sampled, for a response rate of 79%. The cumulative response rate accounting for nonresponse to the recruitment surveys, and attrition is 3.8%.

In August 2018, the ATP switched from telephone to mail recruitment. Invitations were sent to a random, address-based sample (ABS) of households selected from the U.S. Postal Service’s Delivery Sequence File. In each household, the adult with the next birthday was asked to go online to complete a survey, at the end of which they were invited to join the panel. For a random half-sample of invitations, households without internet access were instructed to return a postcard. These households were contacted by telephone and sent a tablet if they agreed to participate. As of Sept. 17, 2018, a total of 8,611 had been invited to join the panel, and 8,022 agreed to join the panel and completed an initial profile survey.

Of the 17,964 individuals who have ever joined the ATP, 13,492 remain active panelists and continue to receive survey invitations.

The teens survey was conducted using the NORC AmeriSpeak panel. AmeriSpeak is a nationally representative, probability-based panel of the U.S. household population. Randomly selected U.S. households are sampled with a known, nonzero probability of selection from the NORC National Frame, and then contacted by U.S. mail and telephone. A subsample of nonresponding households is selected to receive additional, in-person follow-up from field interviewers. More details about the NORC AmeriSpeak panel methodology are available here.

This particular survey featured interviews with 920 teens ages 13 to 17. Interviews were conducted online and by telephone from September 17 to November 25, 2018. Of the 920 teens, 389 were sampled directly from NORC’s AmeriSpeak Teen Panel. These are teens living in empaneled households who have already agreed to participate in surveys and for whom parental consent has already been obtained. The remaining 531 teens came from a sample of AmeriSpeak households known to have at least one child ages 12 to 17. In these households, sampled adults were screened to confirm that they were the parent or guardian of a teen ages 13 to 17 and were asked to solicit the participation of their teen.

The adult and teen samples were each weighted separately to match population benchmarks. The samples were then combined and a final calibration step was applied to the weights to ensure that the combined sample would be representative of the larger U.S. population ages 13 and older.

The ATP sample of adults was weighted in a multistep process that begins with a base weight incorporating the respondents’ original survey selection probability and the fact that in 2014 and 2017 some panelists were subsampled for invitation to the panel. For panelists recruited prior to 2018, an adjustment was made for the fact that the propensity to join the panel and remain an active panelist varied across different groups in the sample. No adjustment was made for new panelists from the 2018 recruitment. The final step in the weighting uses an iterative technique known as raking that aligns the sample to population benchmarks on the dimensions listed in the accompanying table.

The AmeriSpeak teen sample was weighted in a multistep process that began with the panel base sampling weights that reflect each household’s probability of selection and the fact that some households are subsampled for in-person nonresponse follow-up. These household level weights were then further adjusted for nonresponse and unknown eligibility. These household-level weights were passed on to all eligible adults in each participating household and further adjusted to correct for within-household nonresponse, and calibrated to match the U.S. Census Bureau’s Current Population Survey (CPS) on age, sex, education, race/Hispanic ethnicity, housing tenure, telephone status and census division to create the final panel weights.

Empaneled teens already belonging to the AmeriSpeak Teen Panel received the same weight as their parent. For the 389 who completed the survey, a nonresponse ratio adjustment was performed using the teen’s age, gender, race/ethnicity, and their parents’ highest level of education.

For parents who completed the screener and consented to their child’s participation, a ratio adjustment was performed using the parents’ age, gender, race/ethnicity, and education to correct for nonresponse and non-consent. This weight was then passed on to the eligible teen. For the 531 non-empaneled teens recruited through their parents, a final ratio adjustment based on their parents’ age, gender, race/ethnicity and education was performed.

Finally, the empaneled and non-empaneled teens were combined, and the data were raked to match the 2018 CPS March supplement with respect to age, gender, race/Hispanic ethnicity, census division, parents’ highest level of education, and household size.

To create the final set of weights the teen and adult samples were combined and their weights rescaled so that each sample was proportional to its share of the total population. The combined sample was then raked to match the 2016 American Community Survey (ACS) on generational age groups, sex, race/Hispanic ethnicity, education, and the 2017 CPS March Supplement on census region by metropolitan status.

The following table shows the unweighted sample sizes and the error attributable to sampling that would be expected at the 95% level of confidence for different groups: