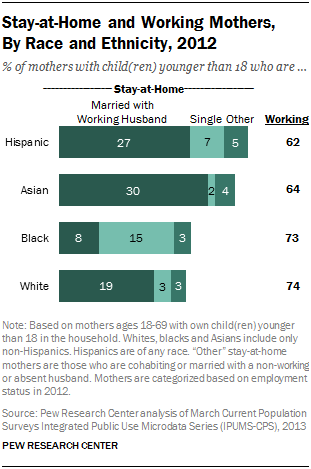 The higher share of stay-at-home mothers among Hispanic and Asian women relates to the fact that so many are immigrants. Fully 86% of Asian mothers were born outside of the U.S., as were 60% of Hispanic mothers. In comparison, just 13% of black mothers and 6% of white mothers are foreign born. Among all immigrant mothers in 2012, 40% were stay-at-home mothers, compared with 26% of mothers born in the U.S. 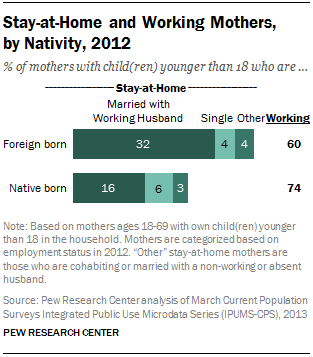 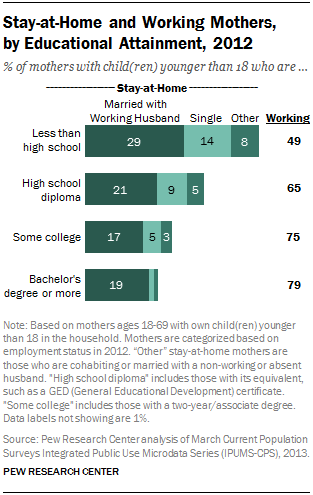 In terms of schooling, the least educated mothers are the most likely not to work outside the home. In 2012, 51% of mothers with less than a high school education were stay-at-home mothers, compared with 35% of high school graduates, 25% of mothers with some college education and 21% of college graduates. The least educated mothers are most likely to be stay-at-home single mothers.

Only the least educated mothers are about as likely now as in 1970 to be stay-at-home mothers, though their share dipped in the late 1990s before rising again. Among women of other educational attainment groups, the share dipped until about 2000, when it began rising again, but it did not reach earlier levels. Among mothers with a college degree, the share of stay-at-home mothers grew only one percentage point, from 20% in 2000 to 21% in 2012.12

Next: Chapter 3: How Do Mothers Spend Their Time at Home?
← Prev Page
Page1Page2You are reading page3Page4Page5Page6Page7
Next Page →

After Decades of Decline, A Rise in Stay-at-Home Mothers Chapter 1: Comparing Stay-at-Home and Working Mothers
Chapter 2: Stay-at-Home Mothers by Demographic Group
Racial and Ethnic GroupsTrends by NativityEducational Attainment
Chapter 3: How Do Mothers Spend Their Time at Home? Chapter 4: Public Views on Staying at Home vs. Working Appendix A: Additional Tables Appendix B: Time-Use Activity Classifications