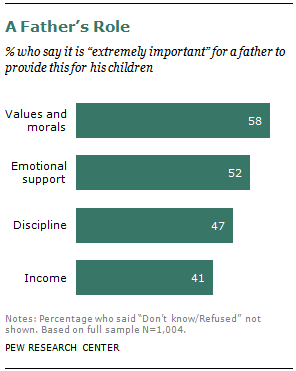 Being a father in this era of changing family structures and converging gender roles means more than bringing home a paycheck or delivering punishment to a misbehaving child. A new survey by the Pew Research Center finds that Americans expect dad to be more of a moral teacher and emotional comforter than a breadwinner or disciplinarian.

About six-in-ten Americans (58%) say it is “extremely important” for a father to provide values and morals to his children, the top ranked paternal role of the four tested in the survey. Roughly half say it is extremely important for a dad to provide emotional support (52%) and discipline (47%). And just 41% say providing income for his children is one of a father’s most important responsibilities, according to the nationally representative survey of 1,004 adults conducted June 6-9.

When the same question was asked about the role of mothers, the survey produced roughly the same hierarchy of responses, with values and emotional support at the top and income at the bottom. 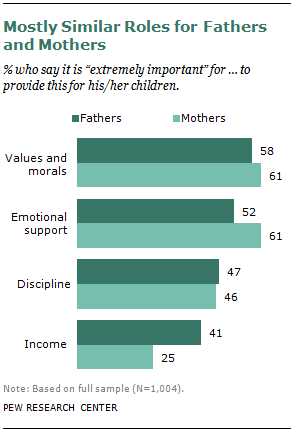 But there are also some differences in the way the public weighs the roles of mothers and fathers, especially when it comes to being an income provider. Just 25% of survey respondents say this is an extremely important role for mothers, compared with 41% who feel that way about fathers.

That gap is notable in light of a recent Pew Research Center report, based on U.S. Census Bureau data, which showed that mothers are the sole or primary breadwinner in 40% of all households that have a child or children under the age of 18, up from 11% in 1960.

There is also a gap, albeit a smaller one, when it comes to providing emotional support to children. Some 61% of survey respondents say this is an extremely important role for mothers, compared with 52% who say the same about fathers.

Nearly equal proportions of respondents say it is “extremely important” for fathers (58%) and mothers (61%) to provide values and morals to their children. Both parents are also viewed as having an equally strong responsibility to discipline their children (47% for fathers and 46% for mothers). 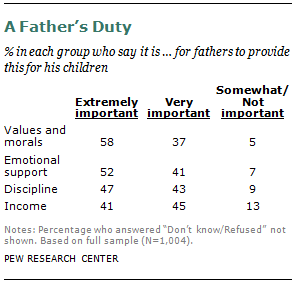 Overwhelming majorities of Americans believe that all four roles are important. About nine-in-ten (86%) say providing income is “extremely important” or “very important” for a father. Even larger proportions place equal importance on a father’s responsibility to provide discipline (90%), emotional support (93%), and values and morals (95%). 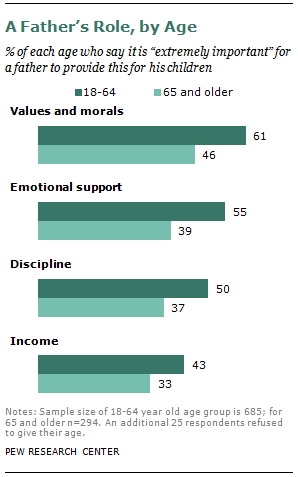 There are some differences by age, race, parental status and gender in the pattern of responses.

Adults under the age of 65 are consistently more likely than older people to say that it is “extremely important” for a father to provide each of the four items tested for his children.

For example, about six-in-ten (61%) of adults younger than 65 say it is “extremely important” for a father to provide values and morals to his children. By contrast, 46% of those 65 and older agree.

Among respondents who are parents—about 70% of the sample—half say providing discipline is an extremely important duty for fathers, compared with 42% among those who are childless. However, parental status makes no difference when it comes to evaluating the importance of the three other roles tested in the survey. 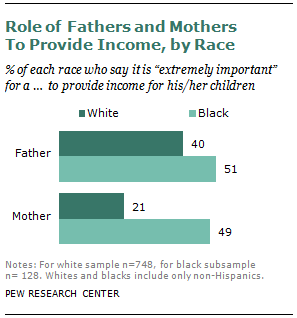 Blacks and whites1 broadly agree on the importance of three of the paternal roles tested in the survey. The one clear exception: the relative importance of both fathers and mothers to provide income to support their families.

According to the survey, blacks are far more likely than whites to see earning a living as a top responsibility of dads and moms. Fully half (51%) of blacks say providing income is “extremely important” for fathers compared with 40% of whites.

The gap more than doubles when blacks and whites are asked about how important it is that a mother provide income for her children. Again, about half (49%) of blacks but only 21% of whites say this is an extremely important role for moms.

Men and women have roughly similar priorities about a father’s most important role. Each gender places a father’s role as moral educator at the top of their lists (for women, emotional support ranks as highly). Earning an income ranks lower.

But the survey also found that women appear to place greater value than men on two of the roles tested in the survey.

The greatest difference emerged on the importance of a father providing emotional support to his children. About six-in-ten women (58%) but 46% of men say it is extremely important, a 12 percentage-point gap. A smaller gender difference occurred on questions measuring the importance of providing values and morals (a 7 point gap). Statistically insignificant gaps also occurred on the father’s role as disciplinarian (4 points) and breadwinner (3 points).

The survey findings presented in this report are based on an omnibus survey, conducted June 6 to 9, 2013, with a nationally representative sample of 1,004 adults living in the continental United States. Telephone interviews were conducted by landline (501) and cell phone (503). The survey was conducted by Princeton Survey Research Associates International (PSRAI). Interviews were done in English by Princeton Data Source. Statistical results are weighted to correct known demographic discrepancies. The margin of sampling error for the complete set of weighted data is plus or minus 3.7 percentage points at the 95% confidence level. The Pew Research Center for the People & the Press assisted in preparing the questionnaire.

Other Research on Fathers

Other recent Pew Research Center studies have explored the evolving role of fathers in the home and in family life. Among the major findings:

Fathers’ time at work and at home

How do fathers feel about their responsibilities?