When the national conversation focuses on class, the social safety net and the distribution of wealth as it has in the past week, the public sees clear differences between Barack Obama and Mitt Romney, and Obama has an overall advantage. People are more likely to say Obama’s policies would help the middle class and poor, while Romney’s policies are generally seen as helping the rich. 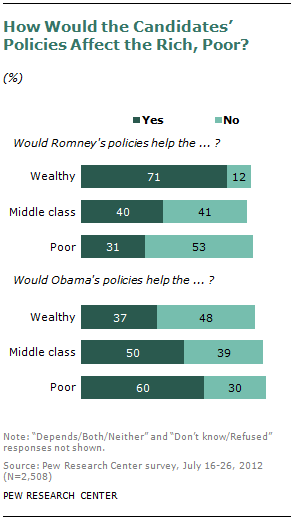 Yet there are aspects of both candidates’ arguments on these issues that resonate with the public. Majorities believe that many poor people are too dependent on government assistance, and that the government can’t afford to do more for the poor than it is already doing. But most also hold that the government has a responsibility to care for those in need and that upper-income—not lower-income— people are not paying their fair share in taxes.

The Tax Burden—Who Pays Too Little? 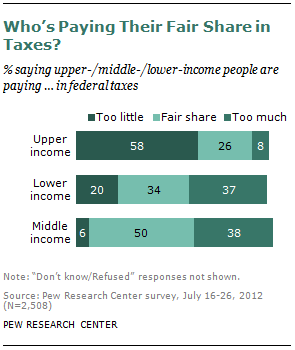 For a more detailed discussion of these topics, see “Yes, the Rich Are Different,” August 27, 2012.

Views on the Social Safety Net 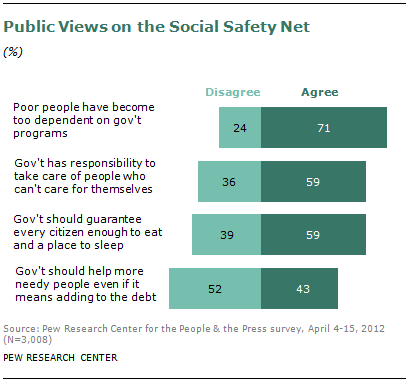 Views on government assistance to the poor vary dramatically by party identification. In fact, Republicans and Democrats are more divided in their views on the social safety net than they are on a host of other issues ranging from public policy to personal religiosity. There are partisan differences of 35 points or more in opinions about the government’s responsibility to care for the poor, whether the government should help more needy people if it means adding to the debt and whether the government should guarantee all citizens enough to eat and a place to sleep. On all three measures, the percentage of Republicans asserting a government responsibility to aid the poor has fallen in recent years to 25-year lows.

The Tax Burden—Who Pays Too Little?Views on the Social Safety Net