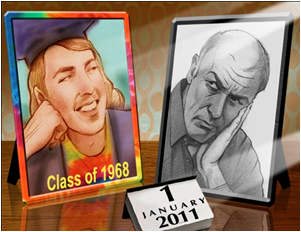 The iconic image of the Baby Boom generation is a 1960s-era snapshot of an exuberant, long-haired, rebellious young adult. That portrait wasn’t entirely accurate even then, but it’s hopelessly out of date now. This famously huge cohort of Americans finds itself in a funk as it approaches old age.

On January 1, 2011, the oldest Baby Boomers will turn 65. Every day for the next 19 years, about 10,000 more will cross that threshold. By 2030, when all Baby Boomers will have turned 65, fully 18% of the nation’s population will be at least that age, according to Pew Research Center population projections. Today, just 13% of Americans are ages 65 and older.

Perched on the front stoop of old age, Baby Boomers are more downbeat than other age groups about the trajectory of their own lives and about the direction of the nation as a whole.

Some of this pessimism is related to life cycle – for most people, middle age is the most demanding and stressful time of life.1 Some of the gloominess, however, appears to be particular to Boomers, who bounded onto the national stage in the 1960s with high hopes for remaking society, but who’ve spent most of their adulthood trailing other age cohorts in overall life satisfaction.

At the moment, the Baby Boomers are pretty glum. Fully 80% say they are dissatisfied with the way things are going in the country today, compared with 60% of those ages 18 to 29 (Millennials); 69% of those ages 30 to 45 (Generation Xers) and 76% of those 65 and older (the Silent and Greatest Generations), according to a Pew Research Center survey taken earlier this month. 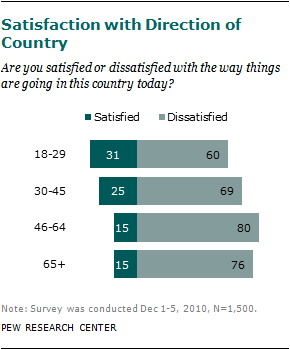 Boomers are also more downbeat than other adults about the long-term trajectory of their lives – and their children’s. Some 21% say their own standard of living is lower than their parents’ was at the age they are now; among all non-Boomer adults, just 14% feel this way, according to a May 2010 Pew Research survey. The same survey found that 34% of Boomers believe their own children will not enjoy as good a standard of living as they themselves have now; by contrast, just 21% of non-Boomers say the same.2

The 79 million member Baby Boomer generation accounts for 26% of the total U.S. population. By force of numbers alone, they almost certainly will redefine old age in America, just as they’ve made their mark on teen culture, young adult life and middle age.

On a range of social issues, Baby Boomers are more accepting of changes in American culture and mores than are adults ages 65 and older, though generally less tolerant than the young. On matters related to personal finances, economic security and retirement expectations, they feel more damaged by the Great Recession than do older adults.

Boomers are latecomers to the digital revolution, but are beginning to close their gadget and social media gap with younger generations. For example, among younger Boomers (ages 46-55), fully half now use social networks, compared with 20% in 2008. That rate of growth is more rapid than for younger generations. Also, more than half (55%) of older Boomers (ages 56-64) now watch online video, compared with 30% in 2008.

On the political front, Boomers—like the nation as a whole – have done some partisan switching in recent years. They narrowly favored Obama for president in 2008 (by 50%-49%), then supported Republican congressional candidates by 53%-45% in the 2010 midterm elections, according to election day exit polls. In their core political attitudes about the role of government, they’re more conservative than younger adults and more liberal than older adults, according to a comprehensive 2010 Pew Research report on long term trends in political values by generation.

In 1970, when the oldest of the Baby Boomers were in their early 20s, the total publicly held national debt was about $283 billion, or about 28% of the Gross Domestic Product. Now, as the oldest Boomers approach age 65, the federal debt is an estimated $9 trillion or 62% of GDP – creating IOUs that members of younger generations may be paying down for decades.4

The Pew Research Center has a deep archive of work that analyzes the demographics, economics, religious beliefs and practices and social and political values of the Baby Boomer generation, and makes comparisons with younger and older U.S. age groups. Our survey work includes questions about family life, personal finances, technology use, aging and a range of other topics.

When asked about the array of changes transforming American family life, the Boomers’ views align more closely with younger generations than older ones. For example, Boomers, like younger adults, are far more likely to say the main purpose of marriage is mutual happiness and fulfillment rather than child-raising (70% of Baby Boomers and Millennial young adults say so, compared with 50% of adults ages 65 and older).

When asked whether children face “a lot more challenges” growing up with divorced parents, racially mixed parents or unmarried parents, Baby Boomers and younger adults are less likely to say yes than are adults ages 65 and older.

However, despite the reputation they gained as young adults for favoring alternative lifestyles, Baby Boomers today are less accepting than younger Americans of same-sex couples raising children, unmarried couples living together and other non-traditional arrangements—though they are more tolerant of them than are adults ages 65 and older.

When it comes to divorce, the Baby Boomers are less conservative than younger generations: 66% say divorce is preferable to staying in an unhappy marriage, compared with 54% of younger adults who say so.

Despite differences by generations on these and other matters, a plurality 43% of Baby Boomers say there is less generational conflict now than in the 1960s and 1970s, when they were coming of age.

Economically, Boomers are the most likely among all age groups to say they lost money on investments since the Great Recession began. Baby Boomers also are the most likely (57%) to say their household finances have worsened. And a higher share of Boomers than older Americans (but not younger ones) say they have cut spending in the past year.

Among those Baby Boomers ages 50 to 61 who are approaching the end of their working years, six-in-ten say they may have to postpone retirement. According to employment statistics, the older workforce is growing more rapidly than the younger workforce.

Nearly two-thirds of Boomers say they follow the news most or all of the time, a higher share than among younger adults.