One child in 10 in the United States lives with a grandparent, a share that increased slowly and steadily over the past decade before rising sharply from 2007 to 2008, the first year of the Great Recession, according to a new Pew Research Center analysis of U.S. Census Bureau data. 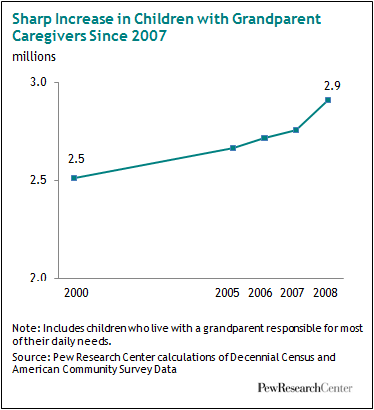 About four-in-ten (41%) of those children who live with a grandparent (or grandparents) are also being raised primarily by that grandparent,1 according to the census data.

The phenomenon of grandparents serving as primary caregivers is more common among blacks3 and Hispanics than among whites,4 but the sharpest rise since the recession began has been among whites.

The number of white grandparents primarily responsible for their grandchildren rose by 9% from 2007 to 2008, compared with an increase of just 2% among black grandparents and no change among Hispanic grandparents.

Almost half (49%) of children being raised by grandparents also live with a single parent. For about four-in-ten (43%) of these children, there is no parent in the household. About 8% have both parents in the household, in addition to the caregiver grandparent. 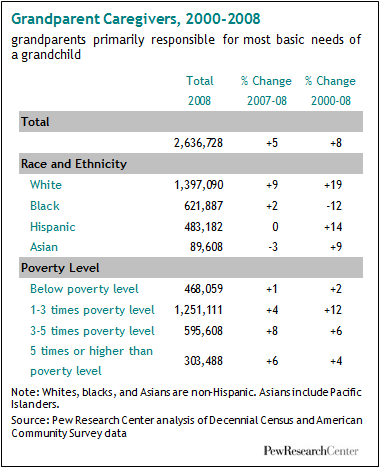 Among grandparents who serve as primary caregivers for grandchildren, there are notable differences by race, ethnicity and income. More than half of grandparent primary caregivers (53%) are white, while 24% are African American, 18% are Hispanic and 3% are Asians. In comparison, in the population ages 50 and older, 78% are white, 10% are black, 8% are Hispanic and 4% are Asian.

There has been a smaller, but still notable increase in Hispanic grandparents serving as primary caregivers since 2000, which may be linked to the increasing size of the older Hispanic population in the U.S. By contrast, the number of blacks serving as grandparents declined by 12%.6

Overall grandparent primary caregivers are relatively young — more than two-thirds (67%) are younger than age 60, with 13% younger than age 45. This likely reflects the fact that younger grandparents are still physically able to take on the needs of grandchildren.

Grandparents Helping in Other Ways

Aside from the small but growing minority of grandparents who have primary responsibility for their grandchildren, how many grandparents help out at least occasionally with childcare? According to the 2009 Pew Research survey, among those ages 65 and older who have grandchildren, 39% say they have helped their adult children with childcare in the past 12 months. These grandparents are more likely to have given their adult children money over the past year (50%), and somewhat less likely to have helped their kids out with errands, housework or home repairs (31%). 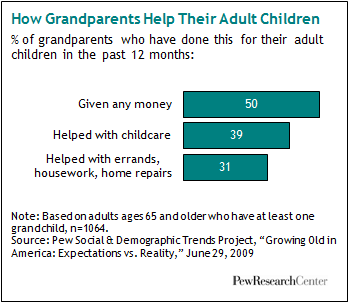 Among grandparents ages 65 and older, the percentage helping out their adult children by providing childcare for the grandkids declines steeply with age. Fully half of those in their 60s and early 70s (51%) say they helped with childcare in the past year. Among those ages 75-84, 30% did so, and among those ages 85 and older, the share falls to 19%.

Older adults are more likely than their younger counterparts to say grandparents helping with child care is a responsibility. And among those with grandchildren, nearly four-in-ten (38%) feel this way.

The Benefits of Aging 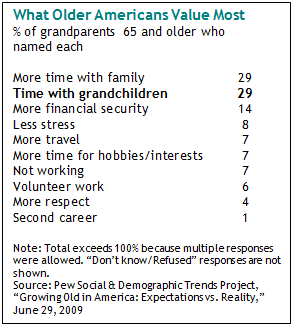 Respondents ages 65 and older were asked whether or not they were experiencing a series of “good things” that can come along with aging. The items ranged from traveling to being financially secure, to spending time with grandchildren.

Overall, 64% said spending time with grandchildren was something they were experiencing as they got older.

When asked which of the various benefits of aging they valued most, time with grandchildren ranked very high. Among older adults who are grandparents, spending time with grandkids was on par with having more time with family — 29% said this is what they value most about getting older. 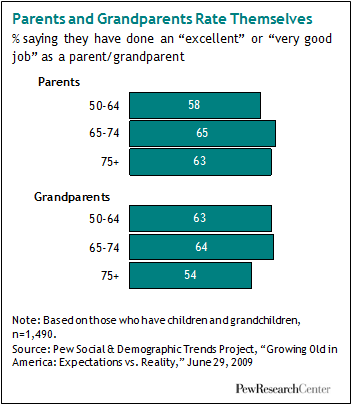 Other potential benefits of growing older, such as financial security, less stress and the ability to travel seem to pale in comparison to grandchildren.

Women ages 65-74 are among the most likely to say they value time with their grandkids above all else. Fully 31% say this is what they value most. This compares with 19% of men ages 65-74.

Younger grandparents give themselves slightly higher ratings than their older counterparts. Among those ages 50-74, 63% say they are doing an excellent or good job as grandparents. This compares with 54% of grandparents 75 and older. Among grandparents who give themselves the highest marks for the job they’re doing with their grandkids are women ages 65-74. Fully 66% of these women say they are doing an excellent or very good job with their grandkids. This compares with 55% of women ages 75 and older.

Grandparents Helping in Other WaysThe Benefits of AgingHigh Marks for Grandparents