At a time when science issues are increasingly part of the broader public discourse, Pew Research Center explored the role of science-related Facebook pages – both those that were meant to enhance the reach of existing science-related media enterprises and those that arose from science enthusiasts and experts utilizing social media platforms to bring their voice to science issues.

The analysis shows that users encounter a wide range of content on science-related Facebook pages. Few of the 30 pages in this analysis produce content across a range of STEM-related areas; in fact, just four of the 30 produce roughly similar shares of posts on several topics. Instead, most pages specialize. The bulk of their content touches just one or two science topics, such as health and medicine, food and nutrition, animal science, or astronomy and physics.

Further, each page tends to present content from one of a handful of frames, and for nearly two-thirds of the pages in this set, a majority of posts reflect just one frame: either new science-related discoveries, science news you can use, or promotions for programs or events.

A systematic analysis of posts produced by these 30 pages over the first half of 2017 found more variation among the pages than there was commonality. Most of these 30 pages appear to feature content they produce themselves, though a few of the Facebook-primary pages appear to serve primarily as aggregators with virtually no content originating from the source organization for the page.

Most science-related Facebook pages focus their content on one or two subject areas, especially health and food topics

Across this set of 30 pages, few aim to cover science across a range of scientific domains. Instead, most pages ­ whether Facebook-primary or multiplatform ones ­ specialize in one or two science topic areas. For example, 70% of posts from Interesting Engineering were related to engineering and technology topics. Similarly, 73% of posts from Psychology Today were related to the behavioral sciences, and nearly three-quarters of posts from NASA Earth (73%) were about energy and the environment. 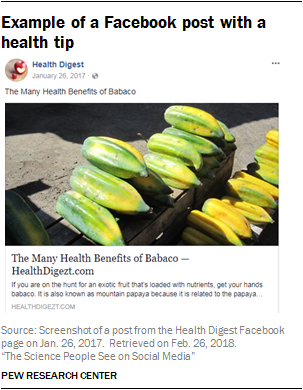 Only four of the pages covered a roughly even share of posts on several topics, with no single topic making up more than one-in-five posts. These were IFLScience, ScienceAlert and ScienceDump, among the Facebook-primary pages, and New Scientist, among the multiplatform pages.

Health and medicine was the predominant topic in posts from many of these pages. About half or more of the posts from three of the Facebook-primary pages and two of the multiplatform pages were about health or medicine topics. For example, health/medicine topics were featured in 65% of posts from Daily Health Tips, 59% of Health Digest posts, and about half of the posts from Women’s Health, Health, and Dr. Oz (a cardiothoracic surgeon known for his appearances on television).6

Pages featuring a sizeable share of posts on health and medicine also tend to include posts on food, nutrition and the health effects of foods. Together, the share of posts on either health/medicine or food/nutrition account for the vast majority of posts from Daily Health Tips (92%), Health Digest (89%), Health and Dr. Oz (79% each). They also account for six-in-ten posts from Women’s Health Magazine (60%). 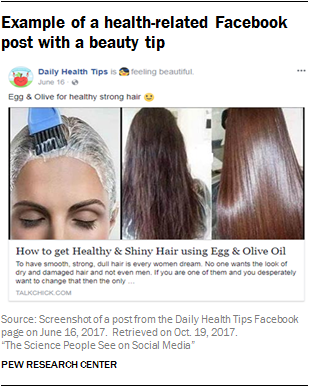 Looking across all of these pages, 39% of posts from Facebook-primary pages and 15% of posts from multiplatform posts related to health and food topics. Among this group, many featured posts on personal health, nutrition, weight loss, exercise and beauty tips, such as a post suggesting that consuming garlic will help lower blood sugar and cholesterol levels (as seen in a June 16, 2017, Daily Health Tips post) and another extolling the virtues of egg and olive oil for healthy hair (also seen in another post from Daily Health Tips on June 16, 2017).

Animal science was the leading topic on three of the multiplatform pages. Posts about animals made up at least half of the content from Animal Planet (75%), BBC Earth (56%) and National Geographic (50%). None of the 15 Facebook-primary pages featured a large share of posts about animals; the largest in this set was IFLScience with 18% of its posts related to animal science.

Three of the Facebook-primary pages belong to prominent astrophysicists. Not surprisingly, about half or more of the posts on these pages were related to astronomy or physics: Dr. Michio Kaku (58%), Stephen Hawking (58%) and Neil deGrasse Tyson (48%).

Bill Nye, another prominent figure known primarily as a science educator, tended to post more generic content; 67% of the posts from his page were categorized as general and not connected with a specific science topic. Many of these posts offered previews of his book and his Netflix television program. (For more on promotional posts, see the discussion below on the primary “frame” of posts on these pages.)

Some pages included a sizeable share of posts that were far afield from science topics. For example, about a third of the posts on Smart is the New Sexy (32%) and almost three-in-ten posts on David Wolfe’s page (28%) were not about science topics. Many of these posts featured inspirational quotes, holiday greetings, news about popular culture or demonstrations showing how to make crafts. 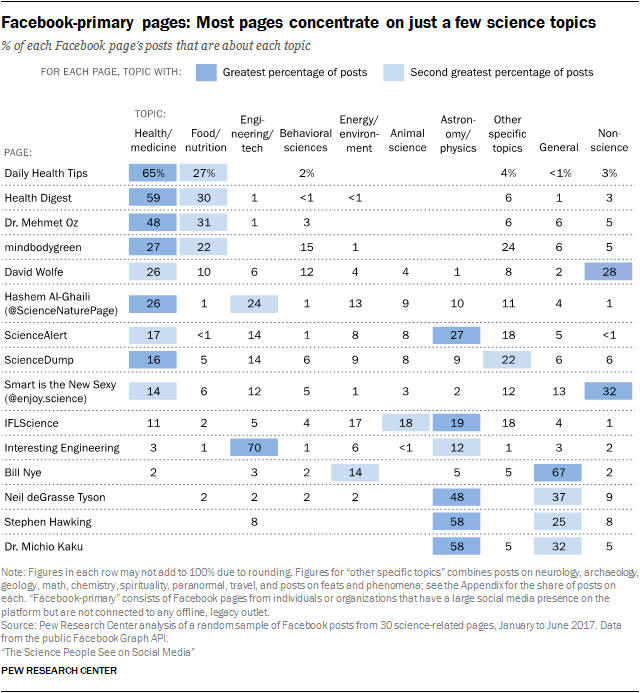 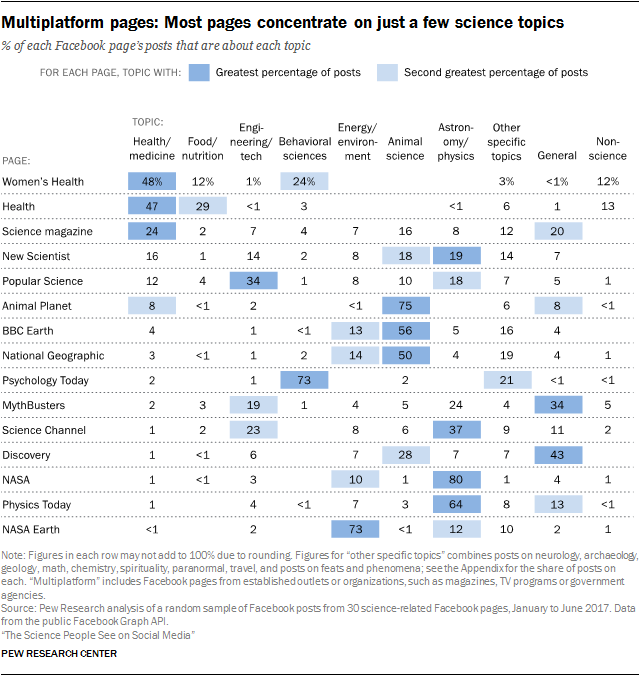 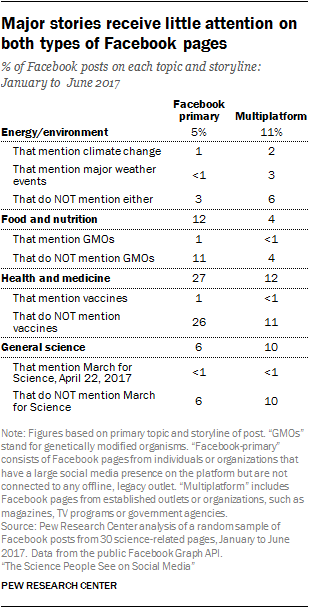 Coverage of major scientific controversies in public discourse was rare on these Facebook pages. For example, while an average of 8% of posts across the 30 pages were about energy and environmental issues, broadly speaking, a much smaller share of these posts were related to climate change – only 1% of posts on Facebook-primary pages and 2% on multiplatform pages.7

Similarly, only about 1% of posts mentioned genetically modified foods or crops.

The April 22, 2017, March for Science, which included a large demonstration in Washington, D.C. and hundreds of satellite protests, marches and demonstrations around the world, received hardly any attention on these pages, accounting for less than 1% of all posts. There were just five posts in the entire sample of 30 Facebook pages that mentioned the March for Science during the month of April in 2017; three of these were from Bill Nye, an honorary co-chair for the event.

Multiplatform pages rely heavily on their own content sources; a few Facebook-primary pages serve as aggregators, mostly sharing content published by other organizations 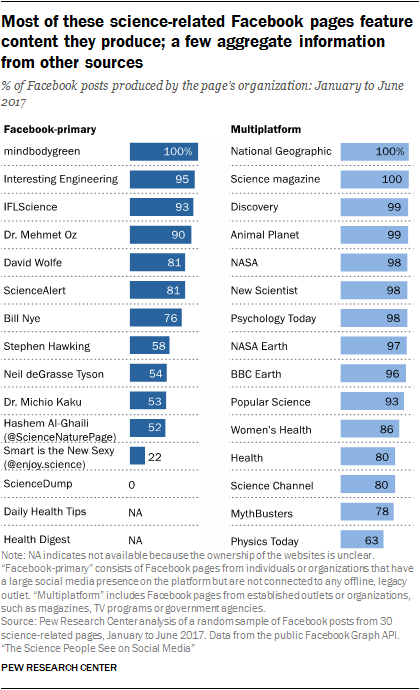 An ongoing question about news shared on social media platforms concerns the extent to which the accounts are featuring information they produce themselves or whether they amplify information produced by other organizations, perhaps with the assistance of automated news generators.

One way to gauge the extent to which these pages are generating custom content for their pages is to classify the source of each post as stemming from the account holder or from an outside organization.8

Multiplatform pages tend to have staff and other resources that might make it easier to create custom-generated content on their pages. The majority of posts from the 15 multiplatform pages came from content produced by the page owner’s organization. Indeed, 100% of the posts on the National Geographic and Science Magazine Facebook pages were produced by their own organizations. The vast majority of posts from a number of other science-related pages for multiplatform organizations also followed this strategy.

ScienceDump and a few of the other Facebook-primary pages, on the other hand, appear to serve primarily as web aggregators, linking to content originally produced by others. Daily Health Tips appears to serve almost exclusively as an aggregator, producing virtually no original content.9

Most science Facebook pages have a single frame for their stories 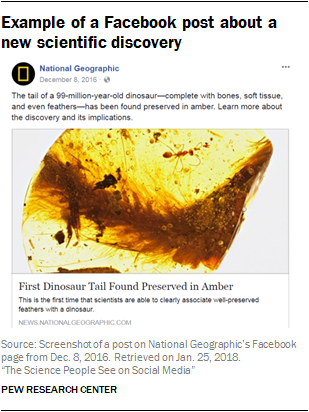 Pew Research Center coded the primary “frame” (or main goal or focus of the post) of a random sample of posts from each page appearing in the first half of 2017. The bulk of posts across the 30 Facebook pages utilized one of three frames: news about a scientific discovery or development, science-related “news you can use,” or a promotion for a media program on another platform.

Overall, 29% of the posts across these 30 pages featured a new scientific discovery or development. The bulk of posts from ScienceAlert (72%), NASA Earth (71%), New Scientist (69%) IFLScience (68%) and Science magazine (61%) were aimed, primarily, at sharing news about a recent science discovery or development. Examples include a March 20, 2017, post from NASA showing years of satellite images demonstrating that New Zealand’s glaciers are retreating; a post from Science magazine on March 7, 2017, about new developments in the study of neural networks; and a May 5, 2017, post from New Scientist about researchers who recreated a gene from billions of years ago that help explains how early life coped with oxygen-poor air.

Across the 30 Facebook pages, a majority of these posts focused on energy and environment, geology, and archeology, and about half of posts on astronomy or physics had a new discovery frame.

‘News you can use’ 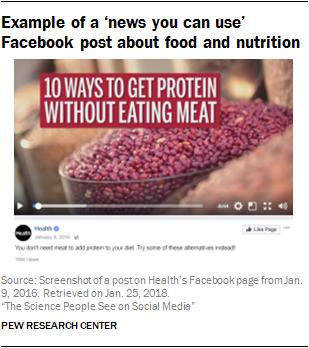 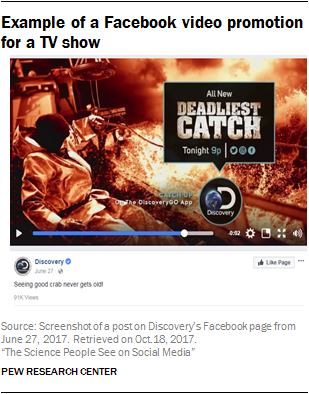 Beyond these three frames, other focus points for the Facebook posts were less common. Across the 30 pages, some 12% of posts focused on explanations of a scientific concept or idea. A handful of pages (such as Hashem Al-Ghaili’s Science Nature Page, Interesting Engineering, National Geographic and Science Channel) included a sizeable share – around a fifth to a quarter – of posts that focused on explanations of a scientific concept or idea. Examples of these include a post on Interesting Engineering about the design of a suspension bridge in Bristol, England, and a video posted on Science Channel’s page demonstrating the size of the world’s largest radio telescope located in China.

No other frame accounted for more than 10% of Facebook posts across the 30 pages. A few pages included archived or previously published material in about 20% to 30% of their posts (e.g., Women’s Health, Popular Science, Smart is the New Sexy, and David Wolfe). And one page, Physics Today, included about three-in-ten posts that profiled notable scientists.10 See Appendix for details. 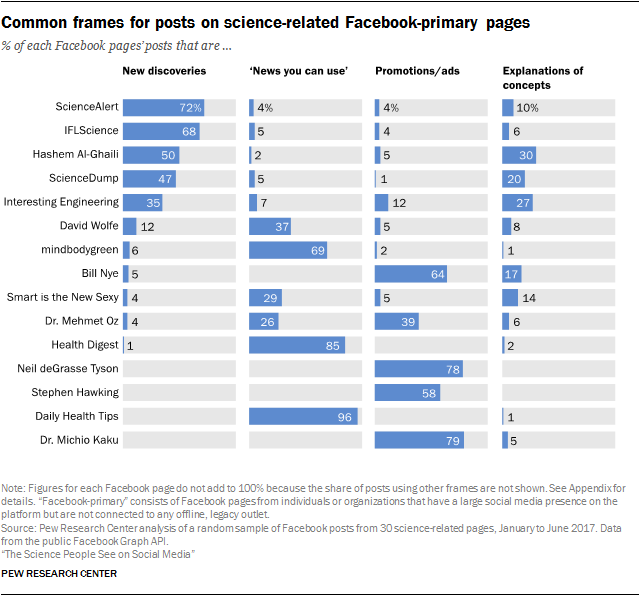 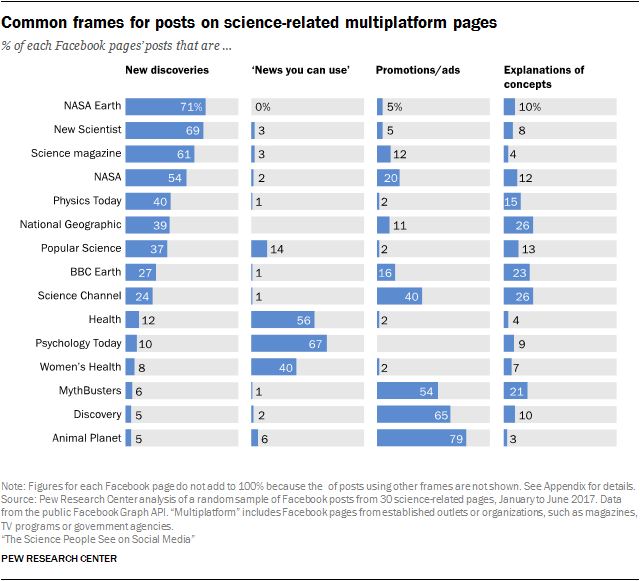 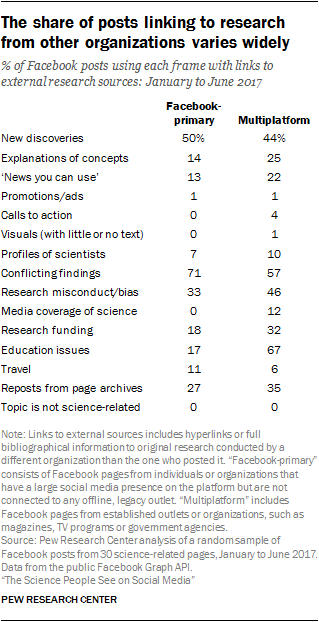 To gauge the extent to which these Facebook pages spread information about scientific research, Pew Research Center analysis classified the share of posts that included a link to research evidence from an outside organization.

In total, the study found that nearly one-quarter of posts on these 30 pages (23%) linked to external scientific research.11 Such links were often to peer-reviewed publications, but some were original research from government agencies or other institutions.12 On average, links to external scientific research were more common among multiplatform pages (25%) than among Facebook-primary pages (21%).

The share of posts with links to outside research varies widely depending on the frame of the post. Among the small number of posts related to conflict or disagreement about scientific findings appearing on any of these 30 pages, 64% had an external link.

Of posts across these 30 pages using a new scientific discovery frame, 47% included a link or reference to outside evidence (50% among Facebook-primary and 44% among multiplatform pages). A majority of posts from ScienceAlert, for example, featured a new scientific discovery or development, and the vast majority of those posts included a link to outside evidence.

A minority of posts using a “news you can use,” promotion, or explanation frame included links to external evidence.

Next: 2. User engagement with posts on science-related Facebook pages is more common for visual posts, calls to action
← Prev Page
Page1You are reading page2Page3Page4Page5
Next Page →

Social Media Use in 2018
Science News and Information Today
4. Most Americans see at least some science posts on social media but tend to distrust what they see
Mixed Messages about Public Trust in Science
How Scientists Engage the Public
Social Media Use in 2021
What the data says about gun deaths in the U.S.
Defining generations: Where Millennials end and Generation Z begins
Key facts about U.S. immigration policies and Biden’s proposed changes
Views on Race in America