Data in this study came from two main data sources: 1) analysis of Facebook posts from a set of 30 science-related pages based on data downloaded from the public Facebook Graph API from Jan. 1, 2014 to June 30, 2017, and 2) human content analysis coding by Pew Research Center staff of a random selection of Facebook posts produced by each of these pages from Jan. 1 to June 30, 2017.

For a comparison of Facebook pages from Facebook-primary and multiplatform organizations, the Center identified science-related public pages (in English only) with a large number of followers. The term “follower” is used interchangeably throughout this report with the number of users who “like” a page using the thumbs up icon.

The selection of “science-related” pages was based on each page’s self-statement that it covers content about science or any of the following science topics: health/medicine, food/nutrition, astronomy, physics, biology/animal science, neurology, chemistry, technology/engineering, energy/environment, geosciences, math, or social and behavioral sciences. The categories broadly align with the major fields of scientific inquiry as defined by the National Science Foundation.

Commercial pages aimed primarily at selling consumer products were excluded, as were advocacy pages such as The Breast Cancer Site and PETA. Pages that covered a range of health/medicine topics were eligible for selection but those that focused exclusively on exercise or recipes were not.

There is no definitive list of science-related Facebook pages. (Facebook offers a list of science pages on its site, but the list is not exhaustive.) To create the list of popular pages analyzed in this study, five researchers searched for pages with a large number of page likes using a variety of methods in June 2017. Using Facebook’s search function, numerous blogs and articles, and results from searches on sites such as Google and trackalytics.com, the Center compiled a list of more than 200 English-language science-related pages that met the above criteria. Only pages with at least 2 million page likes were recorded since pages with fewer followers would not have enough to qualify among the top 30 pages. Each page was classified into one of two groups: a Facebook-primary page or a multiplatform page. The top 15 most popular pages from each group were selected for this study.

A page was considered a Facebook-primary page if it was run by an individual or an organization that used Facebook as their primary way of disseminating information. In some cases, such as IFLScience and ScienceAlert, Facebook was central to the creation and growth of their content and audience. In other cases, such as Stephen Hawking, Bill Nye or Neil deGrasse Tyson, prominent scientists were public figures prior to the creation of Facebook, yet the social media site has enabled these people to reach larger audiences.

Multiplatform pages were run by organizations whose primary method of communication was a media outlet that existed prior to the growth of Facebook as a social media platform. National Geographic, for example, has had a popular magazine and television channel for years. Women’s Health and Popular Science are best known for their traditional magazines rather than their social media presence. The pages for NASA and NASA Earth represent a government agency that has existed for decades.

Pew Research Center downloaded the details for all posts from the selected pages from Jan. 1, 2014, to June 30, 2017, from version 2.8 of the Facebook Graph API. Using Python scripts, details were collected regarding each post’s creation date, ID, description, caption, link, permalink and the total number of shares, comments, likes and other reactions. In total, details were collected for 340,333 posts from the 30 Facebook pages.

Posts for the page Daily Health Tips were missing from the Facebook API for Jan. 7-April 11, 2017. However, researchers were able to manually capture the ID for each of those missing posts and consequently download the accompanying details of all posts during that time. Therefore, those Daily Health Tips posts are included in the study.

Facebook’s API is missing data for large numbers of posts in the second half of 2017 for at least 20 of the 30 pages in the sample. In their forums in early 2018, Facebook acknowledged problems with the API that resulted in the absence of some posts. Therefore, in this report the annual number of posts for 2017 is estimated based on doubling the volume of posts that appeared in the first six months of the year.

Posts that were produced during the sample time period but were removed by the pages themselves prior to the collection of data by the Center were not included in this study.

The number of shares and comments are from the Facebook page URL only. If a page posted a link to a video located on another Facebook page, any data regarding shares and comments on that secondary page were not counted. For example, this April 11, 2016, video on Bill Nye’s page linked to a video on the GQ Facebook page. That post received 1,962 comments and seven shares on Bill Nye’s page at the time of capture, which were counted for this study. On the GQ page, that video received around 75,000 shares and more than 3,000 comments. Those 78,000 interactions were not included in this study since they did not appear on the specific science-related page in this sample.

The link provided by the Facebook API was the URL of the main link featured in each post. In many cases this was a link to the website of the same organization as the Facebook page. In other cases, the link was to another website produced by a different organization. In a few cases, posts did not include any links at all.

In order to examine the specific content and format of posts from these Facebook pages, researchers performed detailed content analysis coding of a random sample of posts from Jan. 1 to June 30, 2017. To control for the different frequency of posts, the Center coded an equal number of posts – 250 – appearing during that six month period from each page. Half of the randomly selected posts appeared during the first three months of 2017, while the other half came from the next three months of 2017.15

For pages that did not have at least 250 posts during those six months, all the posts appearing during the six month period were coded.

For some posts originally selected for the sample, the Facebook post was available, but the content linked to from that post was no longer active. In those cases, those posts were excluded from the coding sample and replaced by another randomly selected post. (The details for these posts were still included in the historical data in this study.)

For each post, coders considered any text or video that appeared on the original Facebook page, along with any text or other information that appeared in the content that was linked to by that Facebook post. Comments were excluded. In total, 6,582 posts were included as part of the human coding sample. See the Appendix for details on the number of sampled posts.

Coded variables in this study were as follows: 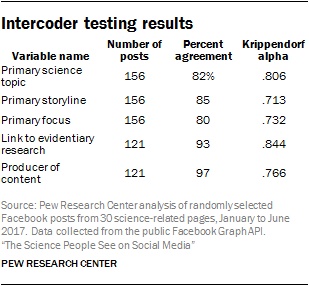 To test the validity of the coding, four researchers classified the same set of 121 posts on five variables. For the three more complex variables, an additional 35 posts were also coded by each person. Intercoder agreement ranged from 80% to 97% across these five classifications. Krippendorf alpha ranged from .71 to .84.

4. Most Americans see at least some science posts on social media but tend to distrust what they see