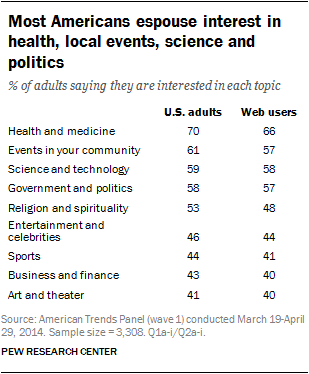 Most Americans express a broad interest in health and medicine, as well as in science and technology along with other topics. Seven-in-ten adults (70%) say they are interested in health and medicine, more than any other of the nine topics asked about in the survey. Large shares also say they are interested in local events in their community (61%), science and technology (59%) as well as government and politics (58%). About half of adults (53%) say religion and spirituality topics interest them. Slightly fewer say entertainment and celebrities (46%), sports (44%), business and finance (43%), or art and theater (41%) are topics that interest them.

The share of web users who express interest in each of these topics is statistically similar to the share of the entire population who report these interests.4 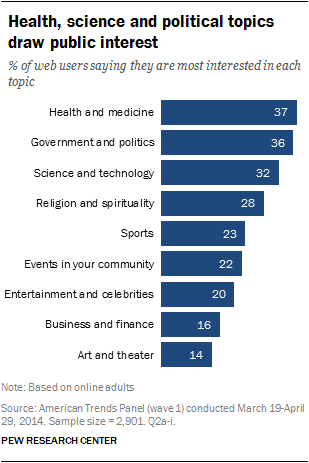 Web respondents on the American Trends Panel (but not those completing the survey by mail) were also asked to specify up to three topics among the set of nine they found “most interesting.” Online adults were especially likely to cite health and medicine, government and politics, and science and technology as topics of particular interest.

Some 37% of online adults say health and medicine is one of the topics they find most interesting, and 32% say science and technology is among the most interesting. A similar share (36%) says they are most interested in government and politics. Fewer adults, by comparison, cite a particular interest in other topics including: religion (28%), sports (23%), local events (22%), business and finance topics (16%), and art and theater (14%).

Some 37% of Americans enjoy keeping up with science news

In general, 37% of Americans say they enjoy keeping up with science news “a lot,” according to a separate Pew Research survey conducted by telephone Aug. 15-25, 2014. A figure that is roughly the same as found in a 2009 Pew Research Center survey (35%).

Men are more likely than women to say they enjoy keeping up with science news a lot; 43% of men say this, compared with 32% of women. 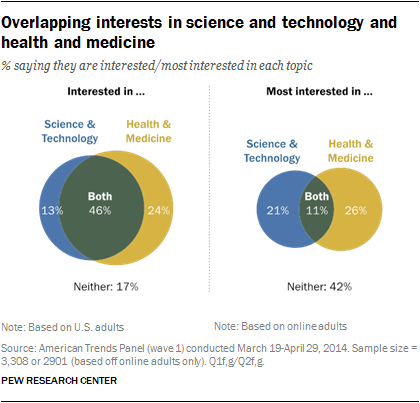 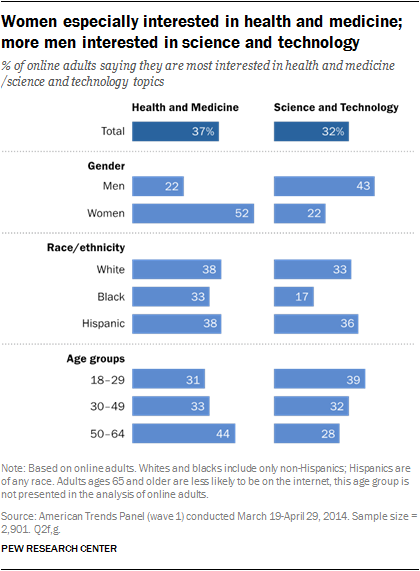 Women are especially likely to express a strong interest in health and medical topics, while men are relatively more inclined to express an interest in science and technology. Women are more than twice as likely as men to say health and medicine is one of the three topics they are most interested in (52% do so, compared with 22% of men). Men are about twice as likely as women to say science and technology is in their top three (43% vs. 22%).

There also tends to be an age divide in interests. Older adults are more likely than younger adults to say health and medicine topics are of particular interest. And the reverse pattern tends to hold when it comes to science and technology.

Whites, blacks and Hispanics express roughly similar levels of interest in health and medicine. However, blacks are less likely than either whites or Hispanics to say science and technology is of particular interest (17% among blacks, compared with 33% among whites and 36% among Hispanics). 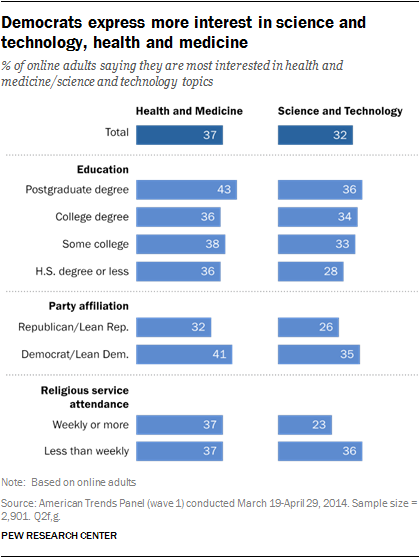 Partisan differences occur when it comes to interest in both topics. Democrats and independents who lean to the Democratic Party are more likely than Republicans and those who lean to Republican to say they are most interested in health and medicine (41% vs. 32%). Similarly, more Democrats and Democratic-leaners (35%) than Republicans and Republican-leaners (26%) say science and technology topics are of particular interest to them. 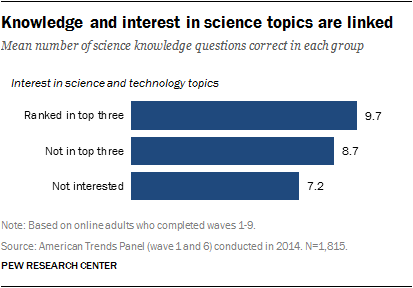 Next: 2. Personality and interest in science, health topics
← Prev Page
Page1You are reading page2Page3Page4Page5
Next Page →