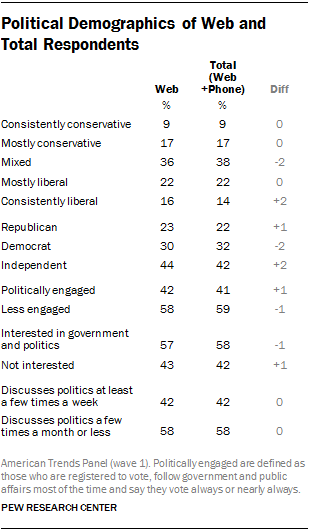 The online format of the American Trends Panel provided the Pew Research Center with a unique opportunity to get both a depth and breadth of information about the media habits of our panelists in a way that could not have been accomplished through another mode, such as telephone or mail. Several of the questions used visual elements that could not have been administered over the phone. In addition, the survey length would have made telephone administration very difficult. For these reasons, most of this report is based on web respondents.

We did however ask the 12% of panel members who opted for a phone survey a smaller portion of the questionnaire. This allowed us to compare the web respondents with the total sample (including the phone respondents) on several important characteristics, including political ideology, interest in politics and demographic characteristics.

Furthermore, much of this report focuses on a key series of questions asked only of web respondents. These deal with specific news media sources, including whether respondents have heard of, trust or distrust, and consume each of the sources. To understand the potential impact of omitting the non-web respondents, we examined data from the Pew Research Center’s 2012 media consumption survey. It shows that Internet users are nearly indistinguishable from all adults in their media consumption habits. This lack of substantial differences is in large part due to the fact that the Internet-using sample is such a substantial portion of the survey’s total sample. The media consumption habits of web respondents are similar to those of the total sample.

That said, the one area where we expect to see a difference between the web users and the total sample is the usage of social media, which by definition is limited to Internet users. As we note in that section, estimates of the usage of these sites is somewhat larger than if the non-web users were included. For example, among web users 48% reported getting news about government and politics in the last week on Facebook. When that is extrapolated to the total population (assuming that no one who took the survey by telephone gets news on Facebook), the percentage falls to 39%. By the same logic, other web-only sources would have a lower incidence of usage among the general public than among the Internet-using population.

Demographically, there are a few differences worth noting in the web and non-web samples. The web respondents are somewhat younger, more educated and wealthier than the total sample. The web sample is fairly similar to the total sample in sex and race. 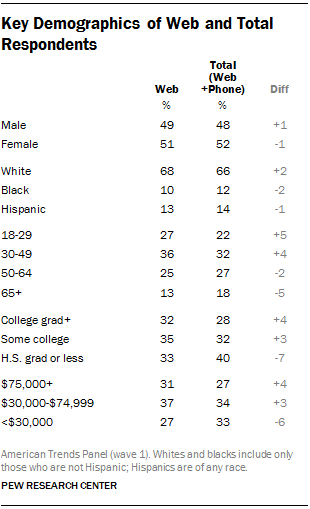 Next: Appendix B: The News Sources
← Prev Page
Page1Page2Page3Page4You are reading page5Page6Page7Page8
Next Page →