The goal of this report is to delve into the religious experiences of Black Catholics. It’s a follow-up to a February 2021 report, “Faith Among Black Americans,” that examined the role of religion in the lives of Black Americans as a whole. Both reports rely on data from a Pew Research Center survey of 8,660 Black adults (ages 18 and older), including 562 Black Catholics, conducted from Nov. 19, 2019, to June 3, 2020. The survey was designed with a very large sample to allow researchers to dig into subgroups, such as Black Catholics, that are too small to be analyzed in most national surveys.

In addition to the 2019-2020 survey described in “Faith Among Black Americans,” some analysis in this report draws on an annual profile survey conducted Aug. 3-16, 2020, among members of the Center’s American Trends Panel. Details about methods used for ATP surveys are available here.

Black Catholics are a minority in the United States in numerous ways. They comprise a small share of Black adults (6%) and an even smaller share of Catholic adults (4%). Still, there are approximately 3 million Black Catholics in the U.S., and the group received media attention after Wilton Gregory, the archbishop of Washington, D.C., became the first Black American cardinal in 2020.

A recent Pew Research Center study designed to capture the diversity of Black American religious life offers new insights into Black Catholics’ religious habits and experiences, finding that their experiences at parishes and at Mass are often distinctive from those of other U.S. Catholics. It also shows that their religious beliefs and practices differ from those of Black Protestants.

One way the religious experience of Black Catholics stands out is that they are a lot less likely than White or Hispanic Catholics – who together make up the vast majority of U.S. Catholics – to worship in parishes where most people share their race or ethnicity. 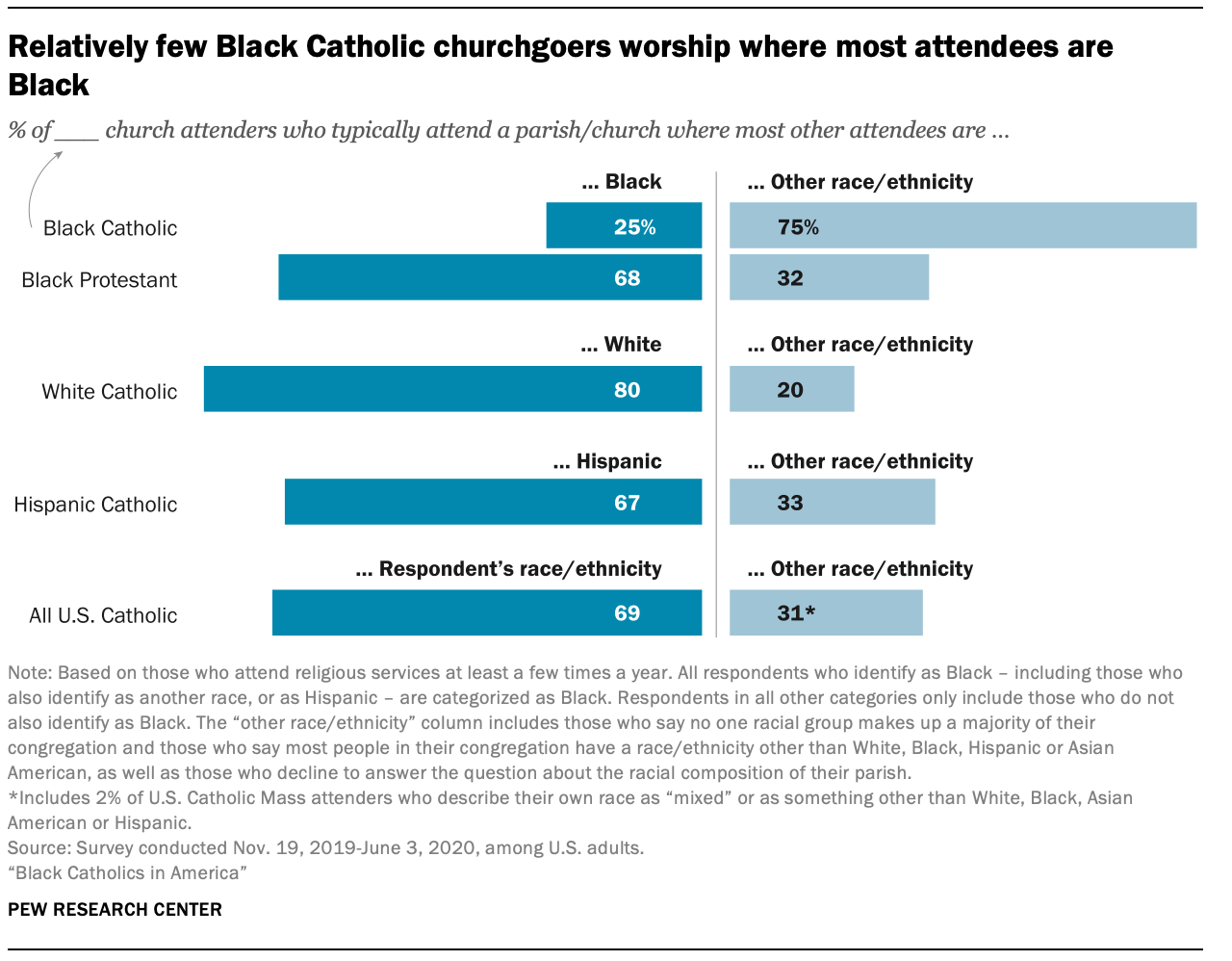 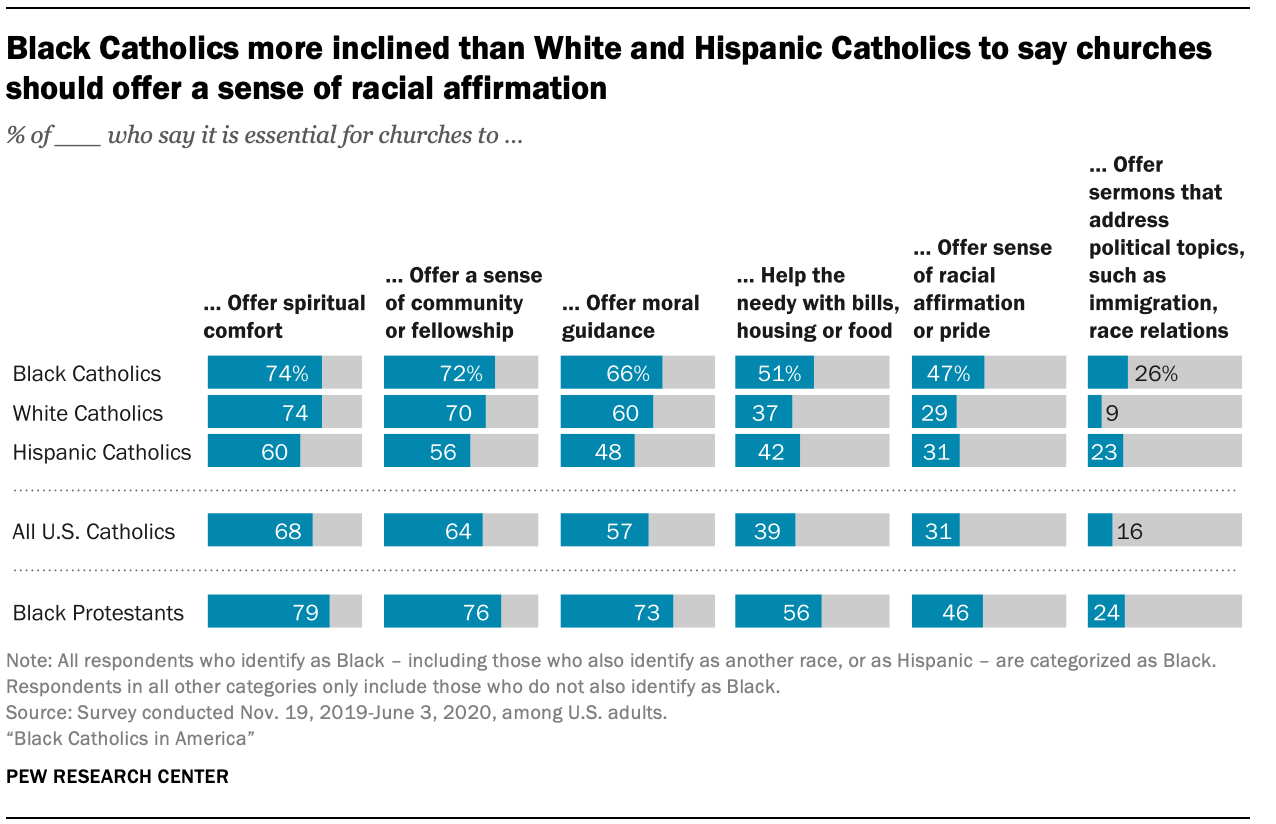 Black Catholics are a little more likely than White or Hispanic Catholics to say that opposing racism and sexism are essential to what being a faithful Christian means to them. They are about as likely as Black Protestants to say that opposing discrimination is essential to their faith, but they are somewhat less likely than Black Protestants to view regular church attendance, belief in God and avoiding sex before marriage as essential to their religious identity. 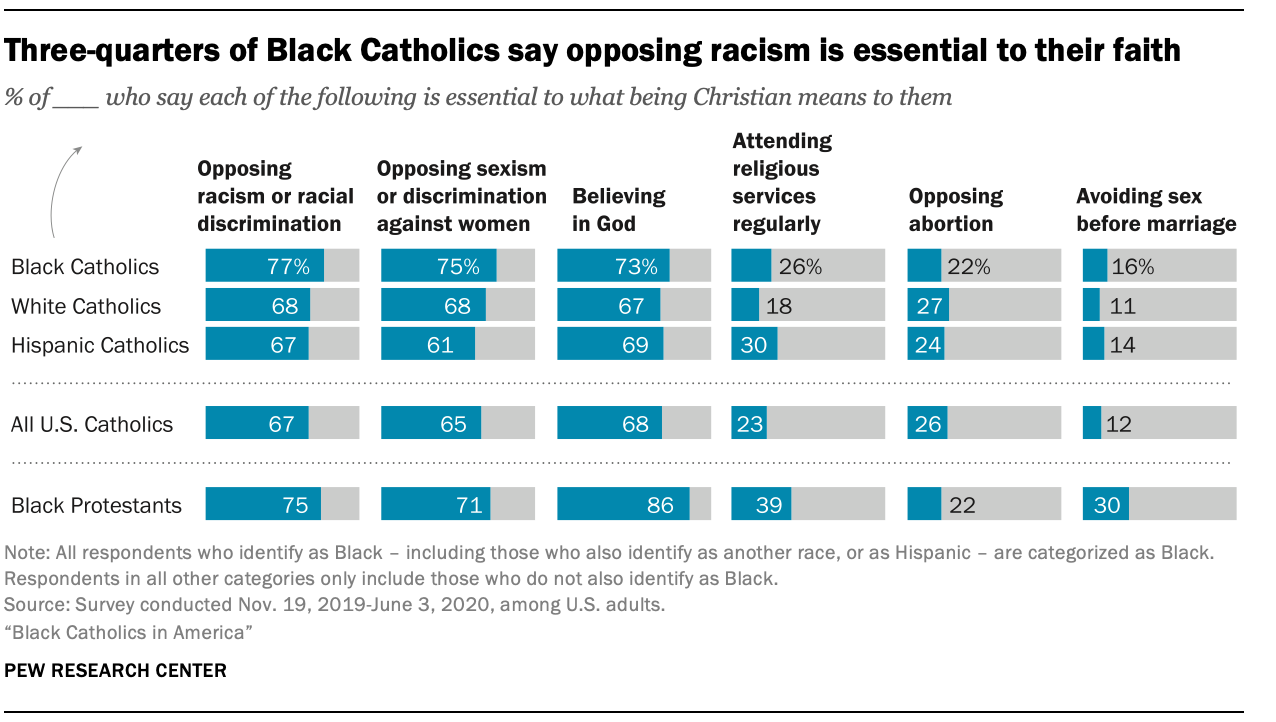 Movement into and out of Catholicism 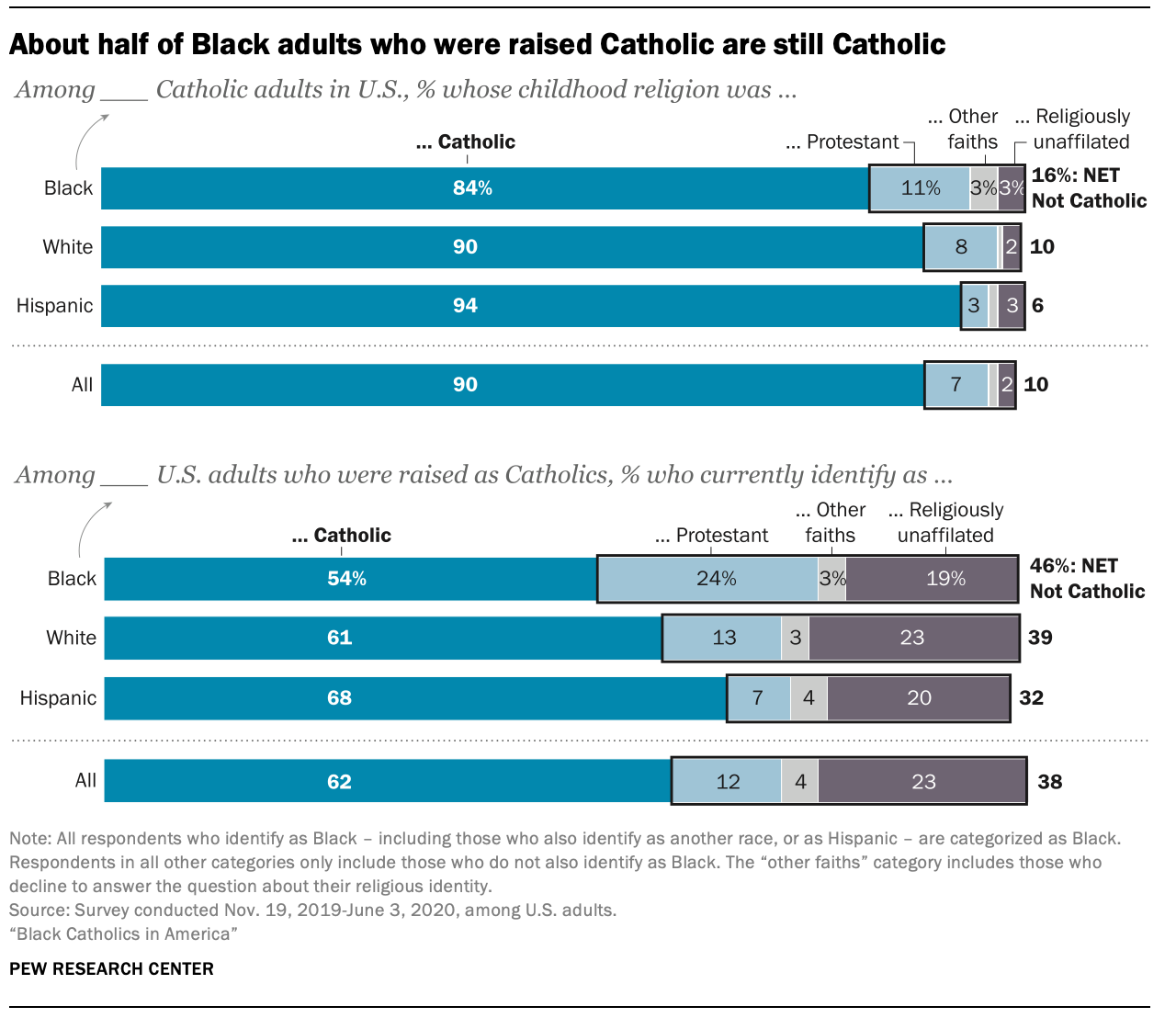 Furthermore, the survey shows that among Black adults, there are more people who have left Catholicism than have come to the faith. Overall, 4% of Black Americans say they were raised Catholic and no longer identify as such, while 1% of Black adults are converts to Catholicism.

A similar pattern prevails among U.S. Catholics as a whole. The Center’s 2014 Religious Landscape Study found that 13% of all U.S. adults are former Catholics – people who left Catholicism after having been raised in the church – while 2% of U.S. adults have become Catholic after being raised in another religion (or no religion). The same study found that Catholicism had experienced the greatest net losses due to religious switching of any Christian religious tradition in the U.S. as of 2014.

These are among the key findings of a new Pew Research Center analysis of the characteristics of Black Catholics. The analysis draws largely on a survey conducted Nov. 19, 2019-June 3, 2020, among a nationally representative sample of 13,234 adults, including 8,660 Black Americans. The survey was designed to capture the diversity of Black religious life in the U.S., allowing for a detailed look at the religious views and experiences of Black subgroups. A broad overview of the survey’s findings is available in the 2021 report “Faith Among Black Americans.” While this new analysis focuses specifically on Black Catholics, it also incorporates data on White and Hispanic Catholics, as well as on Black Protestants, for comparison purposes.

While Protestantism historically has dominated the Black religious landscape in the U.S., Catholicism has long had a significant presence among Black Americans. For example, Pierre Toussaint, a leader in New York City charities in the 1800s, was the first lay Catholic buried in the crypt of that city’s St. Patrick’s Cathedral. The Black Catholic population grew in the early and mid-20th century when Black Americans migrated from the rural South to cities across the country with large preexisting Catholic populations and, in many cases, strong parochial school systems. In more recent years, immigration from Africa and the Caribbean further boosted the Black Catholic population.1

Attendance and experiences at Mass for Black Catholics 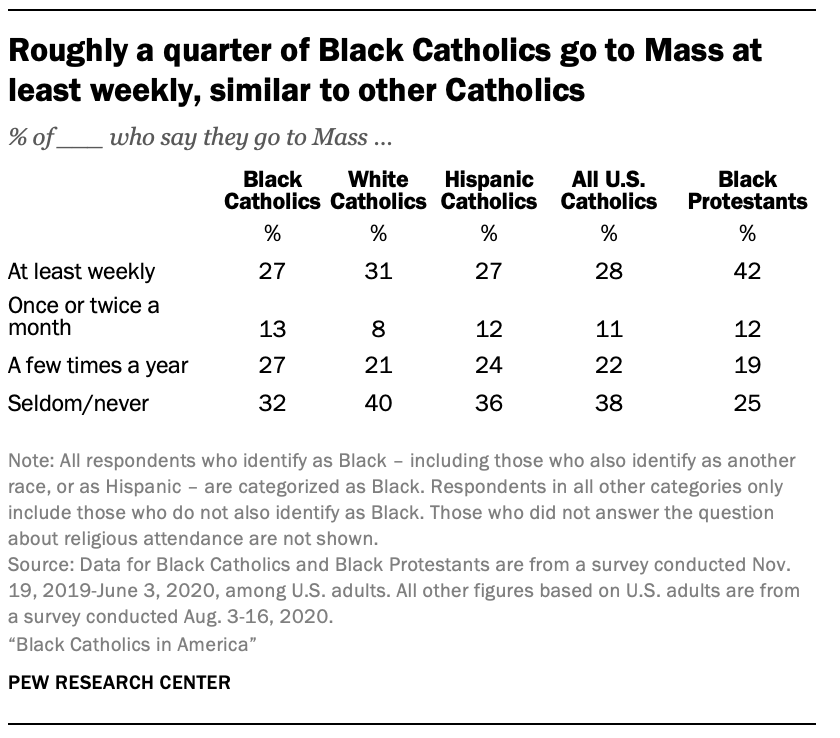 While the share of Black Catholics who attend Mass weekly is similar to that of other Catholics, the survey suggests that their experiences while at Mass differ from those of White and Hispanic Catholics in certain ways. 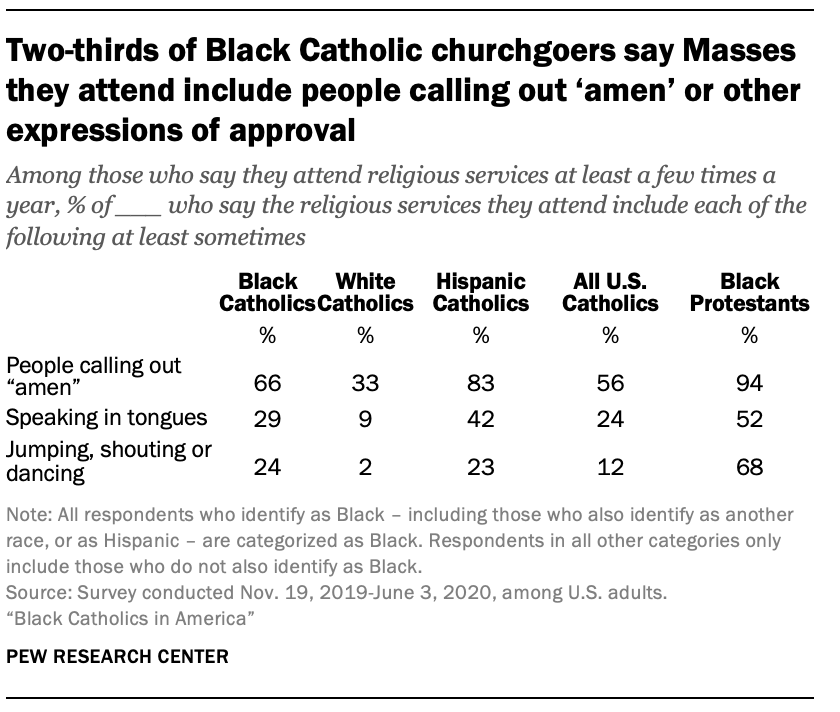 Black Catholics who attend Mass at least a few times a year are more likely than their White counterparts to say they attend services where other attendees often or sometimes call out “amen” or other expressions of praise (66% vs. 33%). They are also more likely than White Catholic churchgoers to say their experiences at least sometimes include two practices often associated with a charismatic style of worship: speaking or praying in tongues (29% vs. 9%) and jumping, shouting and dancing spontaneously during the service (24% vs. 2%). At the same time, among churchgoers, Black Catholics are somewhat less likely than Hispanic Catholics to experience people calling out “amen” and speaking in tongues at Mass, and they are much less likely than Black Protestants to say these things are typically present at their worship services.

Black Catholics are less likely than Hispanic Catholics, but more likely than White Catholics, to have heard sermons or discussion about immigration at church. 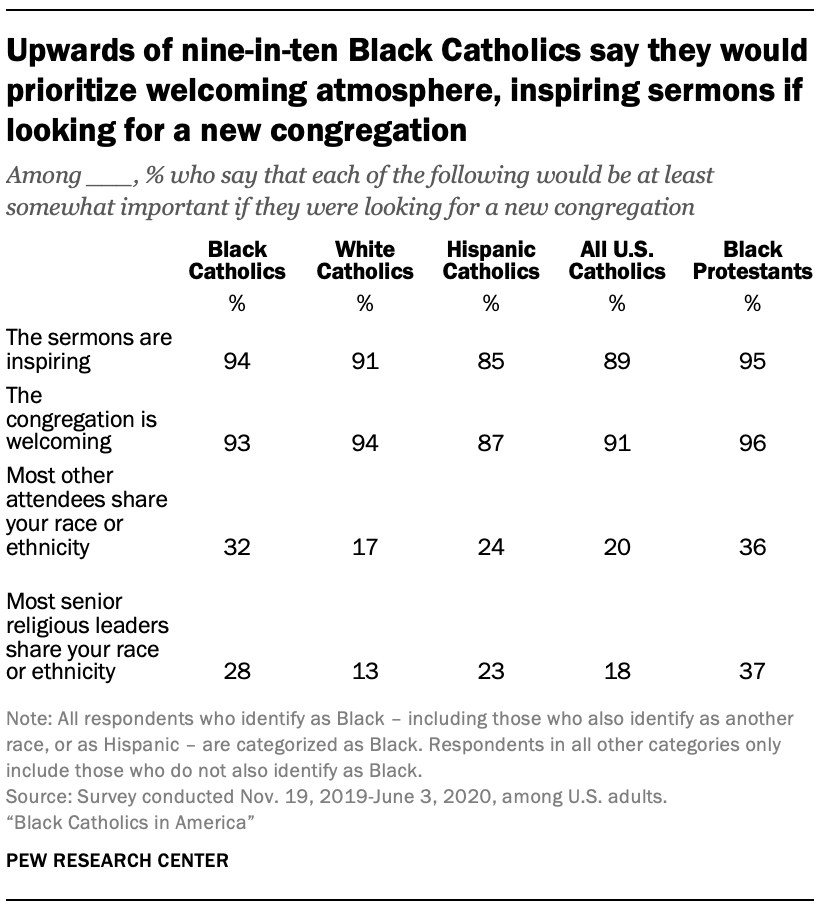 If they had to find a new church, nearly all Black Catholics say finding a “welcoming” congregation would be either very important (76%) or somewhat important (16%) to their choice. A similar share say it would be very (75%) or somewhat (20%) important for the parish to offer sermons that are inspiring.

By comparison, only about a third of Black Catholics say that having most of the other attendees share their race would be at least somewhat important (32%) to their choice of a new church, while two-thirds say it would be “not too” (30%) or “not at all” important (36%). Black Catholics give similar priority to finding a congregation where most of the clergy share their race. 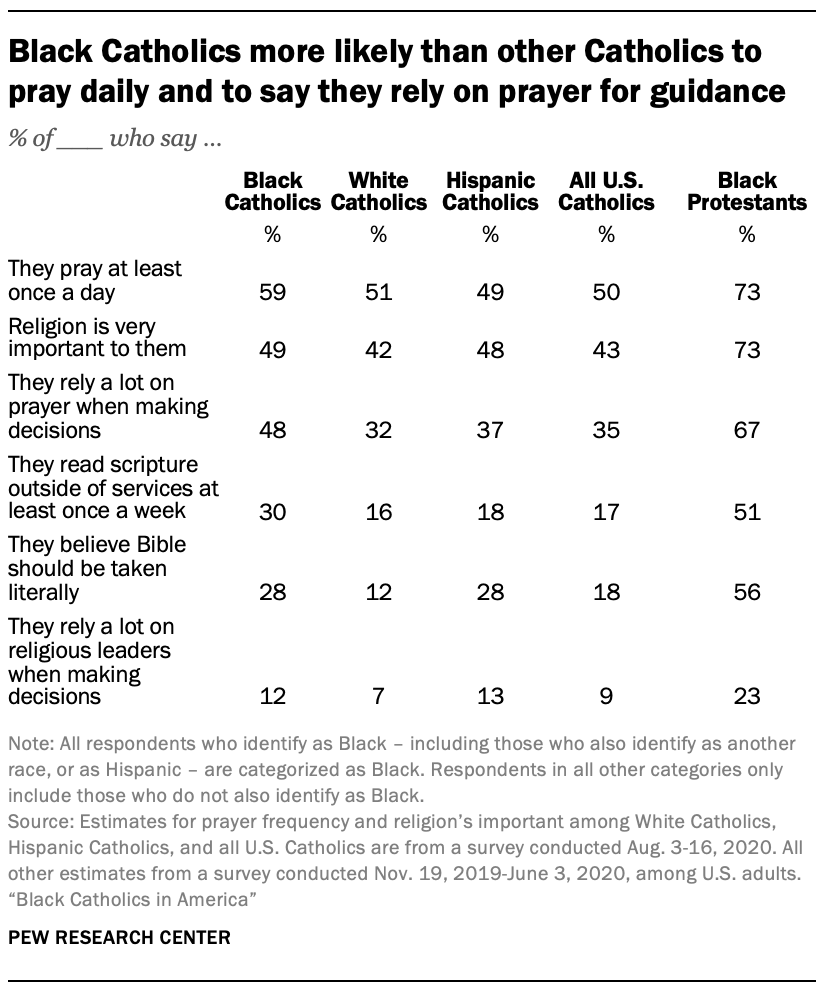 While Black Catholics attend Mass at rates similar to White and Hispanic Catholics, the survey finds higher levels of individual religious practice among Black Catholics by some measures.

Black Catholics also are more likely than other Catholics to rely “a lot” on prayer for guidance in major life decisions. Nearly half of Black Catholics (48%) say they do this, compared with around four-in-ten Hispanic Catholics (37%) and about a third of White Catholics (32%).

There are additional differences by race and ethnicity when it comes to reading scripture outside of religious services. Three-in-ten Black Catholics say they do this at least once a week, compared with 16% of White Catholics and 18% of Hispanic Catholics. Black Catholics also are more likely than White Catholics to say the Bible should be taken literally (28% vs. 12%).

While Black Catholics tend to be more religious than White Catholics on these measures, they tend to be less religious than Black Protestants, who are much more likely to pray at least daily (73%), to say religion is very important in their lives (73%) and to read scripture at least once a week (51%). 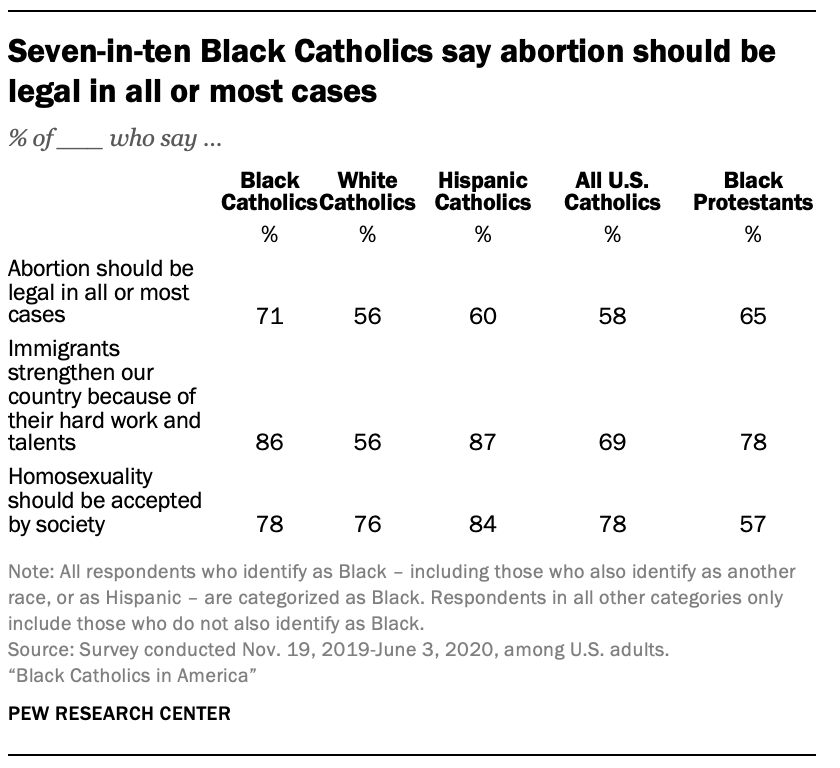 While the Roman Catholic Church opposes abortion, most Black Catholics (71%) say it should be legal in all or most cases. This is a higher level of support for legal abortion than is seen among U.S. Catholics who are Hispanic (60%) or White (56%).

Asked whether homosexuality should be accepted by society, Black Catholics (78%) are about as likely as White (76%) and Hispanic (84%) Catholics to say that it should. Black Catholics are much more likely than Black Protestants (57%) to take this position. 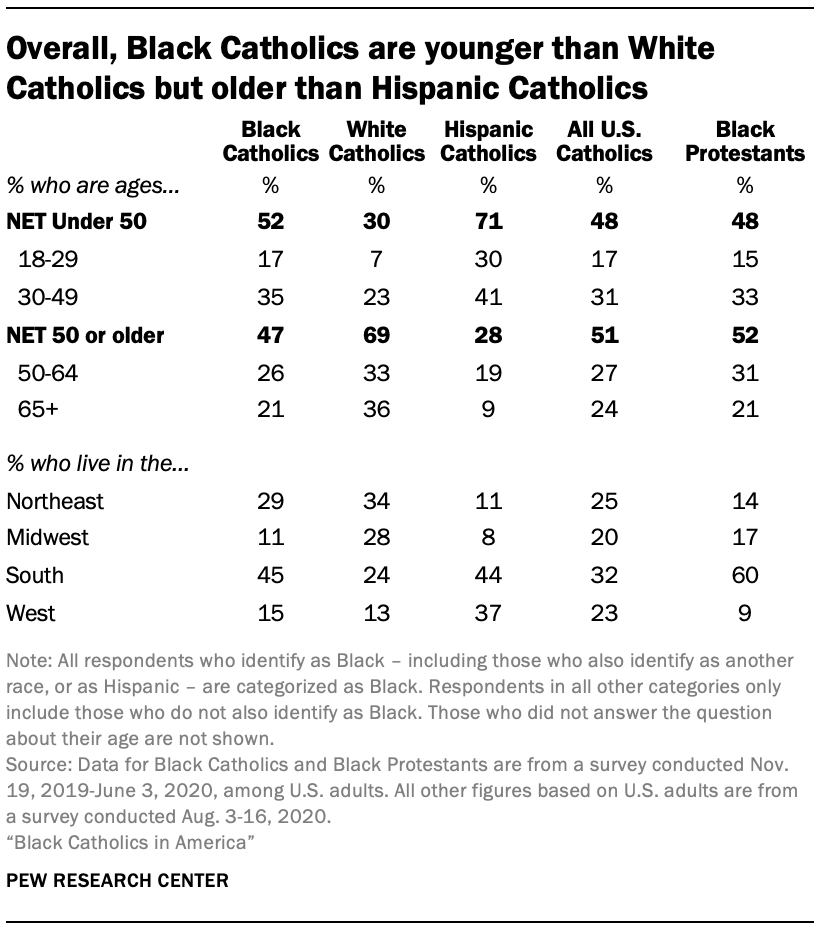 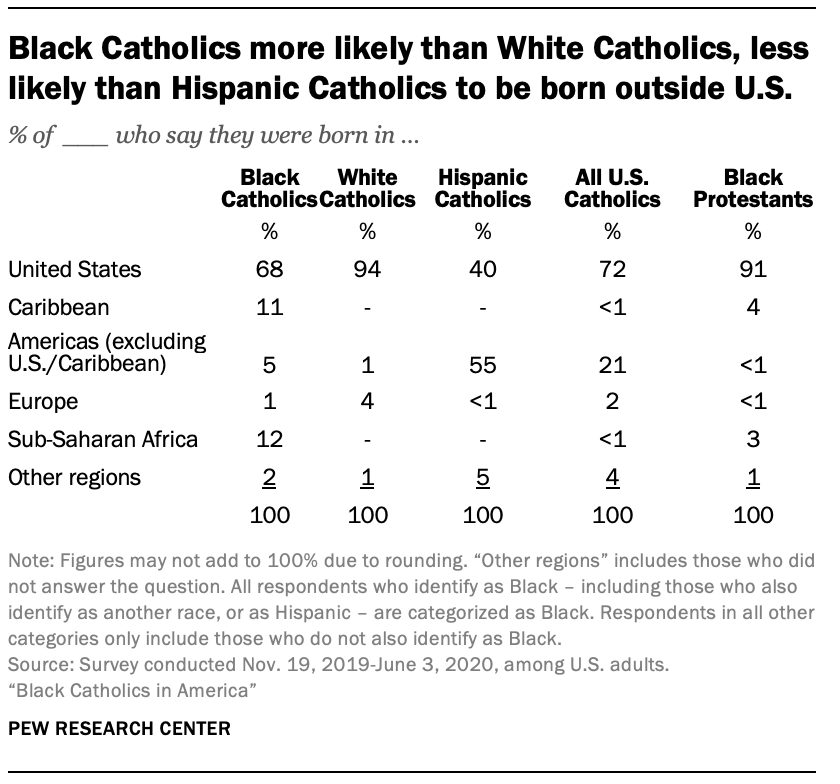 Black Catholics in America
Movement into and out of CatholicismAttendance and experiences at Mass for Black CatholicsPersonal devotionSocial and political viewsAge, U.S. region and country of origin
Acknowledgments Methodology