Majorities of U.S. adults say they believe in heaven, hell

Nearly three-quarters of U.S. adults say they believe in heaven. (The survey did not immediately offer a definition of heaven, though subsequent questions explored what respondents think heaven is like.)

While most U.S. adults also believe in hell, this belief is less widespread than belief in heaven. Roughly six-in-ten American adults (62%) say they believe in hell, though once again there are notable differences across subgroups of the population.

Across most Christian subgroups, smaller shares say they believe in hell than heaven. While roughly nine-in-ten Protestants in the evangelical and historically Black traditions believe in hell, only about seven-in-ten mainline Protestants (69%) and 74% of Catholics share this belief. 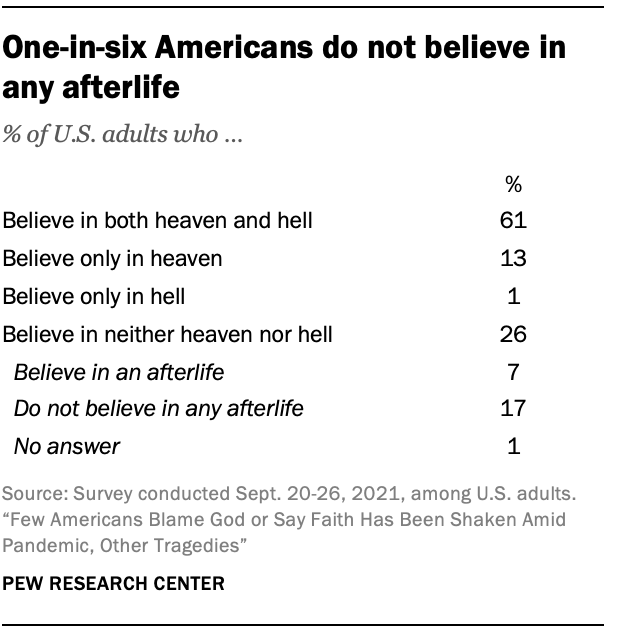 Respondents who believe in neither heaven nor hell but do still believe in an afterlife were given the opportunity to describe their idea of this afterlife in the form of an open-ended question that asked: “In your own words, what do you think the afterlife is like?”

Within this group, about one-in-five people (21%) express belief in an afterlife where one’s spirit, consciousness or energy lives on after their physical body has passed away, or in a continued existence in an alternate dimension or reality. One respondent describes their view as “a resting place for our spirits and energy. I don’t think it’s like the traditional view of heaven but I’m also not sure that death is the end.” And another says, “I believe that life continues and after my current life is done, I will go on in some other form. It won’t be me, as in my traits and personality, but something of me will carry on.”

An additional 17% of respondents who believe in neither heaven nor hell (but do believe in some kind of afterlife) express a belief in people enduring a cyclical existence or becoming enlightened after death. As one individual puts it, “Maybe something like nirvana or enlightenment? I like to imagine that the living world we inhabit is like a cradle for the soul. We spend our lifetime (or maybe many lifetimes) learning and growing, and then in the afterlife we retain all those memories from our life(/lives), and the lessons we’ve learned, and that we exist for some greater purpose that living prepares us for.”

Among many other responses, some people believe that people’s energy rejoins the universe in some form, while others feel that people simply enter a period of peace without suffering. And many people in this group (42% of everyone who says they believe in an afterlife but not in heaven or hell) did not offer a response.

Believers largely see heaven as free from suffering, hell as just the opposite 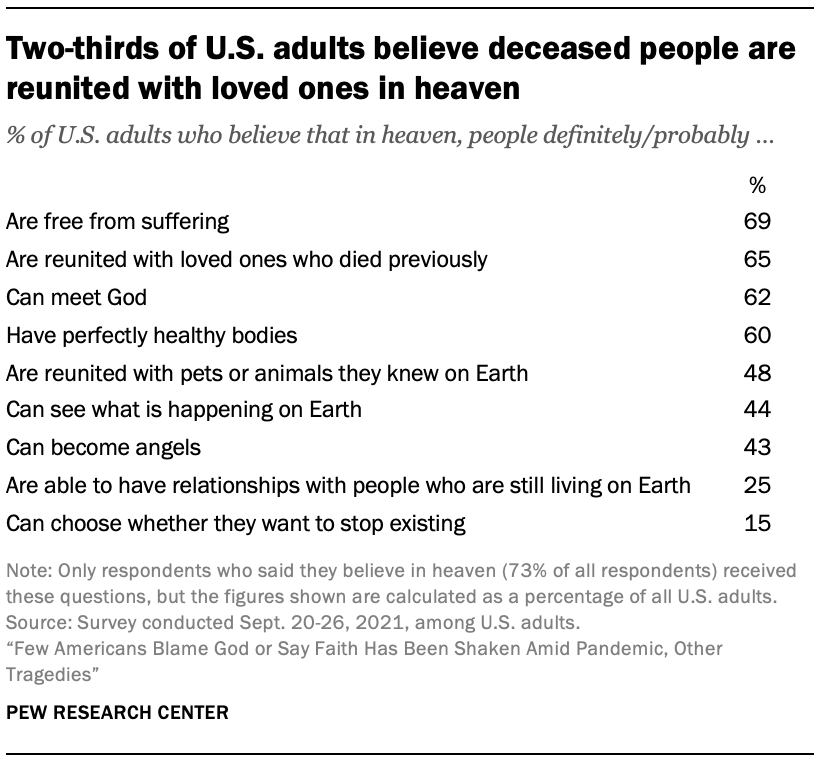 In addition to asking about general belief in heaven and hell, the survey asked about specific characteristics of these two destinations to determine what Americans think they are like. In the case of heaven, respondents were presented with nine prospective traits, and asked whether heaven is “definitely like this,” “probably like this,” “probably not like this” or “definitely not like this.”

Of the items listed, U.S. adults are most likely to say that in heaven, people are definitely or probably free from suffering, with roughly seven-in-ten members of the general public holding this view. This perspective is nearly unanimous among the 73% of Americans who express belief in heaven.

Majorities of Americans also express confidence in the ideas that in heaven, people are reunited with deceased loved ones (65% of all U.S. adults say this), can meet God (62%) and have perfectly healthy bodies (60%). Roughly half of all U.S. adults (48%) believe that people in heaven are reunited with pets or animals that they knew on Earth, while more than four-in-ten say that people in heaven can see what is happening on Earth (44%) and can become angels (43%).

Smaller shares believe that people in heaven are able to have relationships with people who are still living on Earth (25%), or that they can choose whether they want to stop existing (15%). 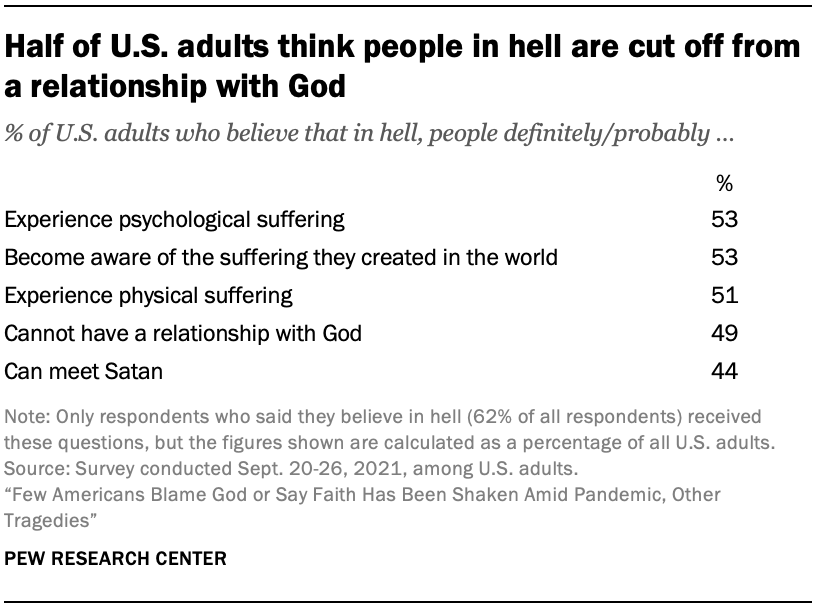 In the case of hell, the survey asked about five different traits. About half of all U.S. adults – the vast majority of the 62% who believe in hell – say that people in hell definitely or probably experience psychological suffering, become aware of the suffering they created in the world, experience physical suffering, and are prevented from having a relationship with God. A slightly smaller share (44%) say they believe people in hell definitely or probably can meet Satan.

Who can get to heaven? No consensus on whether belief in God, being Christian is required 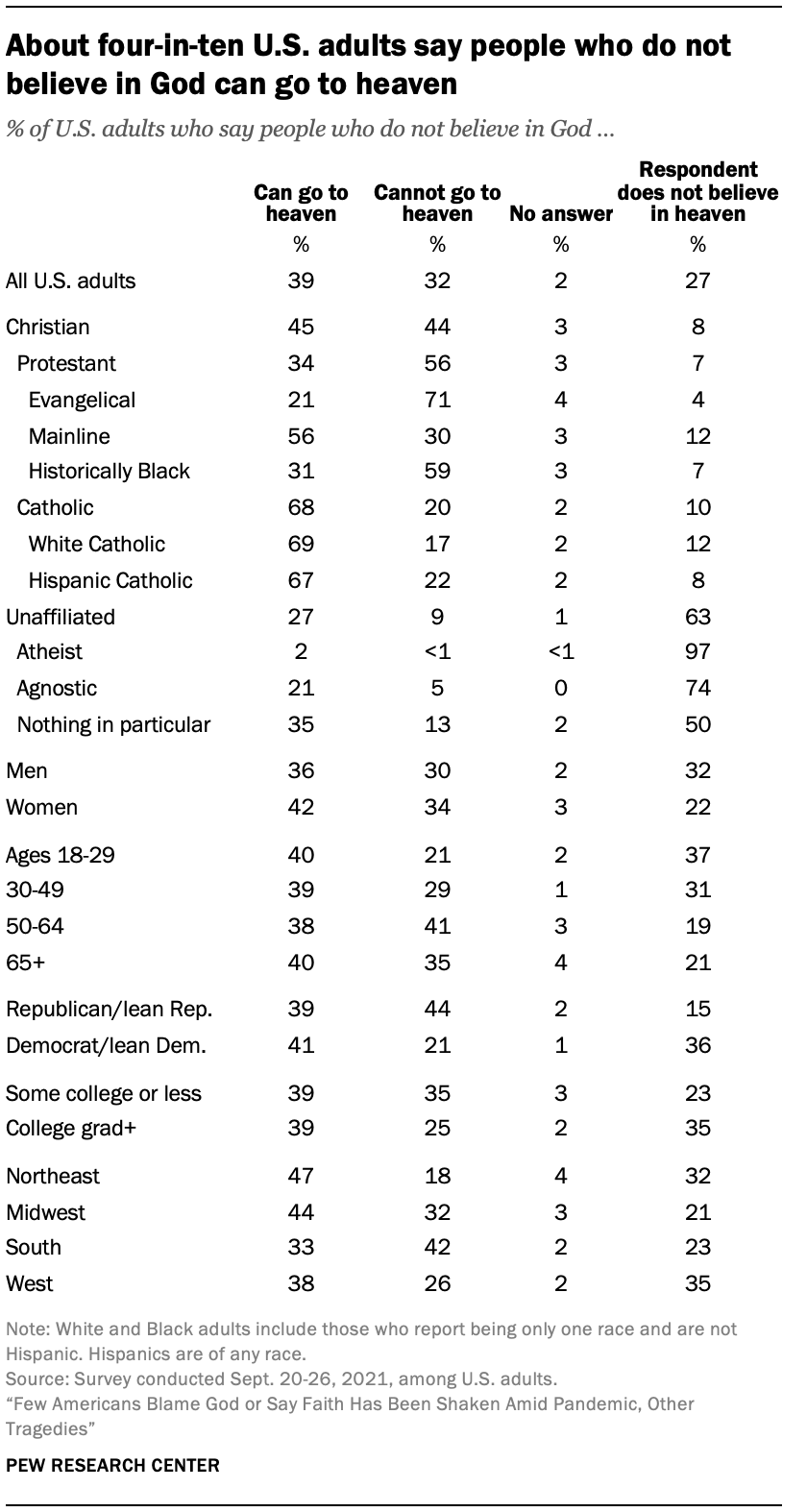 About three-in-ten U.S. Christians (31%) say that their religion is the one true faith leading to eternal life in heaven, while nearly twice as many (58%) say that there are multiple religions that can lead to heaven.

Catholics are more likely than Protestants to say that many religions can lead to heaven and that non-Christians are included (61% vs. 35%), although most mainline Protestants (55%) also say this. Members of the evangelical and historically Black Protestant traditions, however, are more likely to say either that theirs is the one true faith leading to eternal life in heaven or that only Christian religions can lead to heaven. 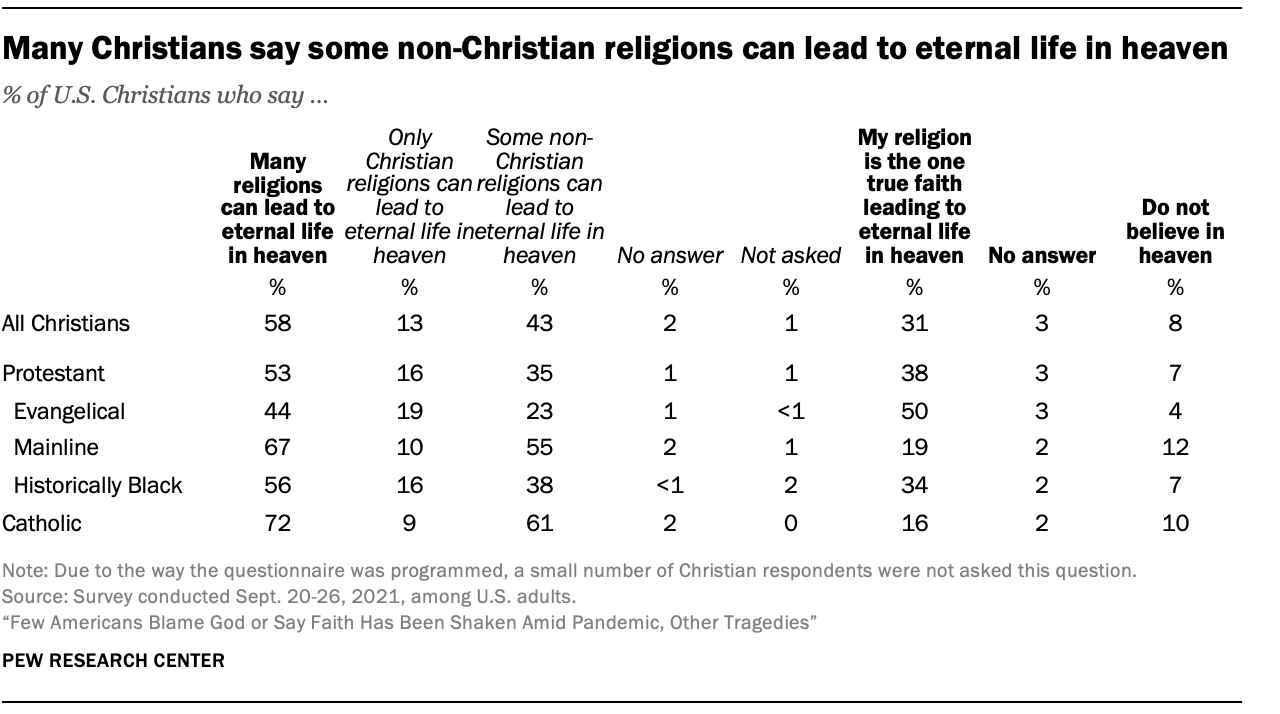 Fewer than half of Americans believe in reincarnation, fate

The survey also asked respondents about a few other concepts associated with the afterlife or the supernatural.

Though the share of adults who believe in reincarnation – i.e., that “people will be reborn again and again in this world” – is much lower than the share who believe in heaven or hell, it is a view held by a substantial minority of the population (33%). 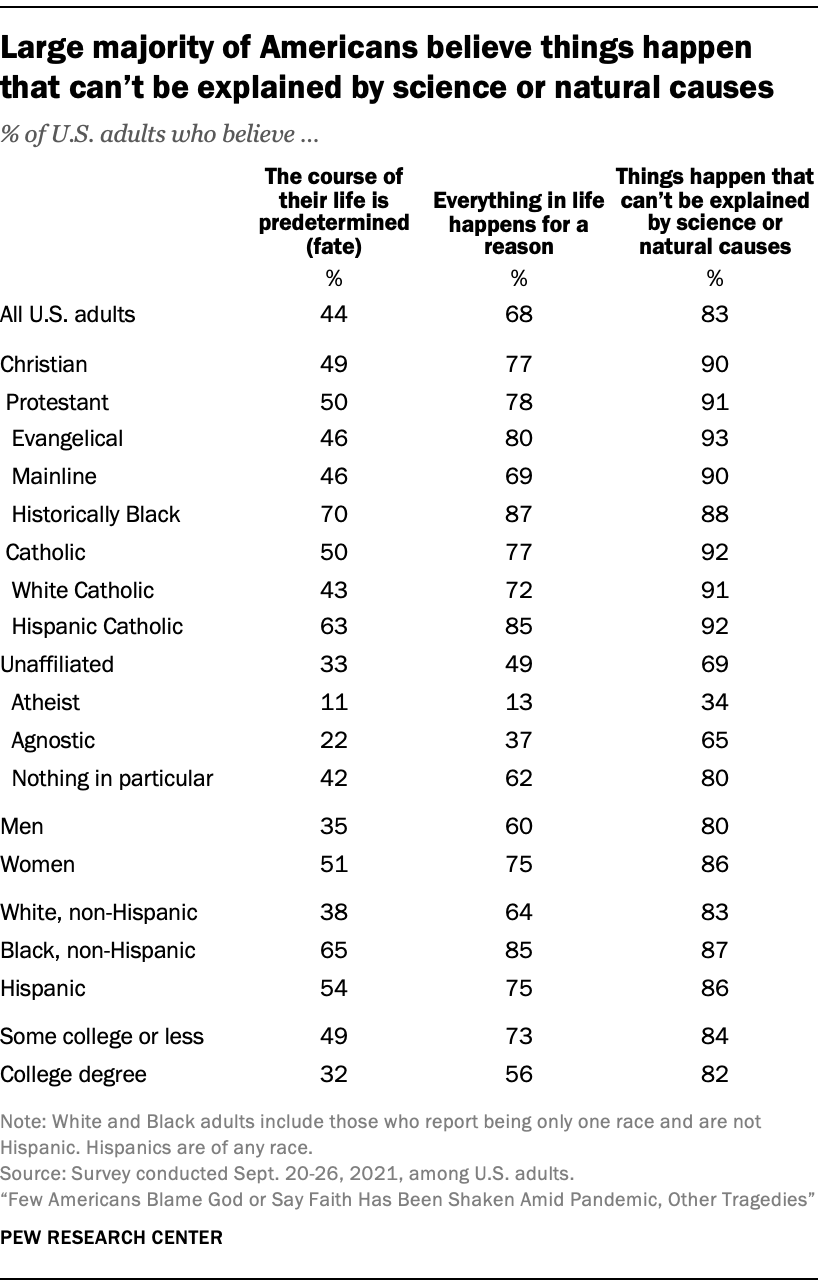 Overall, 44% of U.S. adults say they believe in fate, defined as the course of their life being predetermined. This group includes half of women (51%) and 35% of men. There also are differences based on levels of educational attainment, with college graduates significantly less likely than those without a degree to say they believe in fate (32% vs. 49%).

Protestants and Catholics overall are identical on this question, with 50% in each group saying they believe in fate. But there is again wide variation along racial and ethnic lines within each group: Protestants in the historically Black tradition (70%) are much more likely than evangelical or mainline Protestants to believe in fate (46% for both evangelical and mainline Protestants), as are Hispanic Catholics compared with White Catholics (63% vs. 43%). One-third of religiously unaffiliated adults believe in fate, with those who describe their religion as “nothing in particular” much more likely than atheists and agnostics to hold this view.

Differences among religious “nones” are even bigger on a question about whether everything happens for a reason. Most of those whose religion is “nothing in particular” (62%) say that everything in life does happen for a reason, compared with just 13% of atheists and 37% of agnostics. Overall, 68% of U.S. adults hold this view, including 78% of Protestants and 77% of Catholics.

The survey also gave examples of various supernatural occurrences and asked respondents to say whether they think each is possible, and if so, whether they had ever personally experienced it. 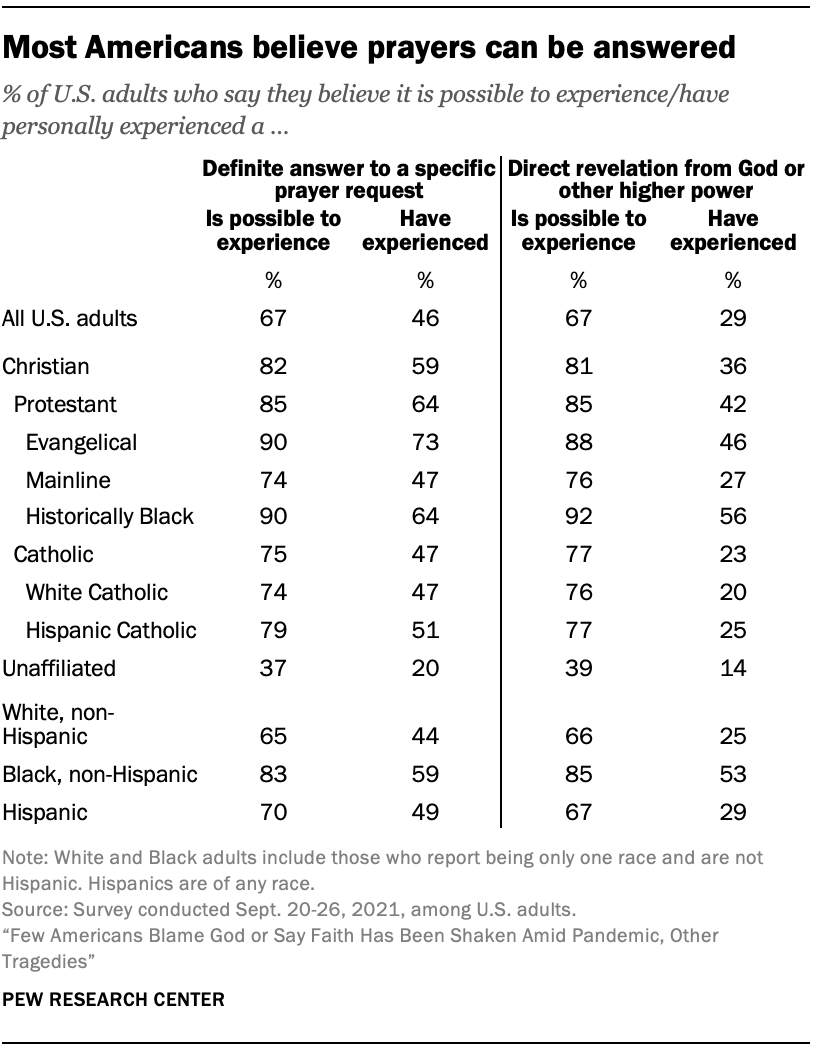 Overwhelming majorities of Protestants report believing both experiences are possible (85% on each question), and most even say that they personally have received a definite answer to a specific prayer request (64%). This experience is especially common among evangelical Protestants (73%), although members of the historically Black Protestant tradition are more likely than evangelicals to say they have experienced a direct revelation from God (56% vs. 46%).

Most Catholics in the U.S. express belief that it is possible to receive a definite answer to a specific prayer request (75%) and a direct revelation from God (77%), though they are somewhat less likely than Protestants to say so. Fewer than half of religiously unaffiliated Americans say the same (37% and 39%, respectively).

Contrary to the questions about interaction with God, Catholics are more inclined than Protestants to say it is possible for people to feel the presence of someone who has died (86% vs. 71%), with two-thirds of religious “nones” (66%) also expressing this view. Catholics also are most likely to believe it is possible to get help from the departed (68% vs. 49% of Protestants and 43% of “nones”) and communicate with them (57% vs. 46% and 42%, respectively). Evangelical Protestants, meanwhile, are no more likely than religiously unaffiliated Americans to report believing in or experiencing all of these interactions with the deceased. 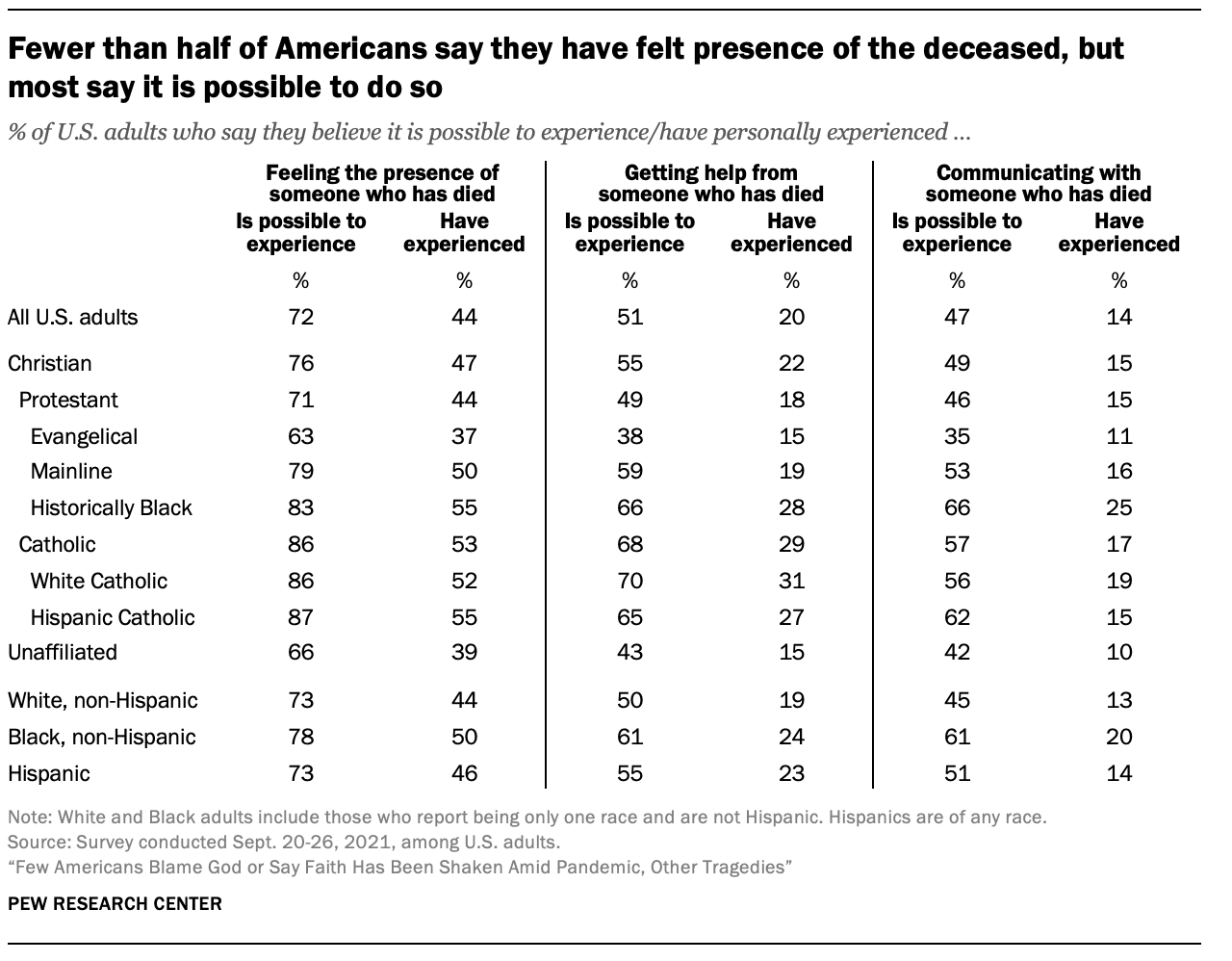 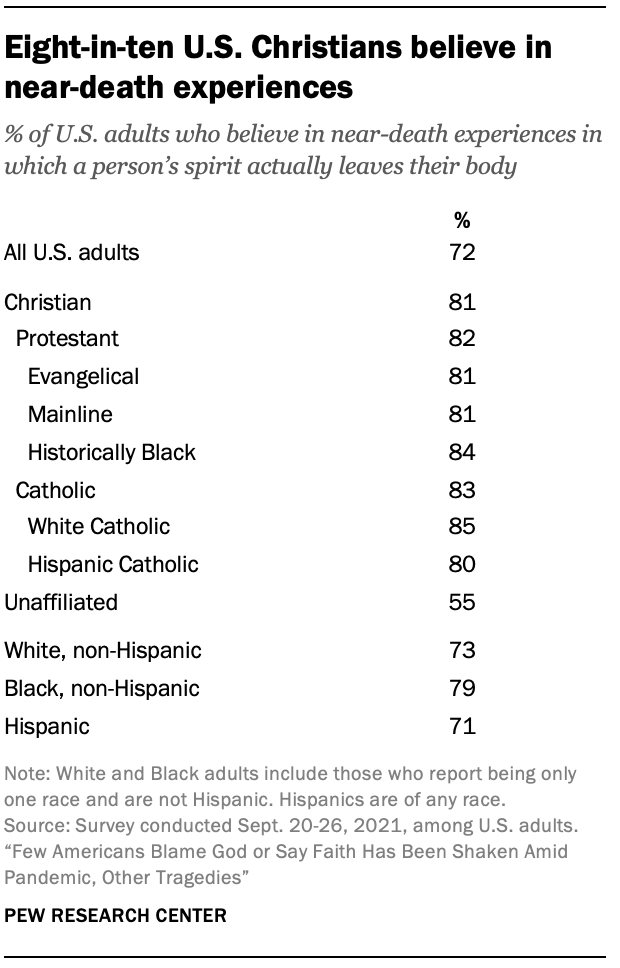 Almost three-quarters of all U.S. adults (72%) think it is possible for people to have “a near-death experience in which their spirit actually leaves their body.” Protestants (82%) and Catholics (83%) are more likely than the religiously unaffiliated (55%) to believe that such an experience is possible, as are Black Americans compared with Americans of other races.

The survey did not ask about whether people have actually had such an experience.

Few Americans Blame God or Say Faith Has Been Shaken Amid Pandemic, Other Tragedies 1. Views on human suffering and God’s role in it
2. Views on the afterlife
Majorities of U.S. adults say they believe in heaven, hellBelievers largely see heaven as free from suffering, hell as just the oppositeWho can get to heaven? No consensus on whether belief in God, being Christian is requiredFewer than half of Americans believe in reincarnation, fateMost Americans believe people can communicate with God or other higher powerMost believe some interaction is possible between the living and the dead
Acknowledgments Methodology