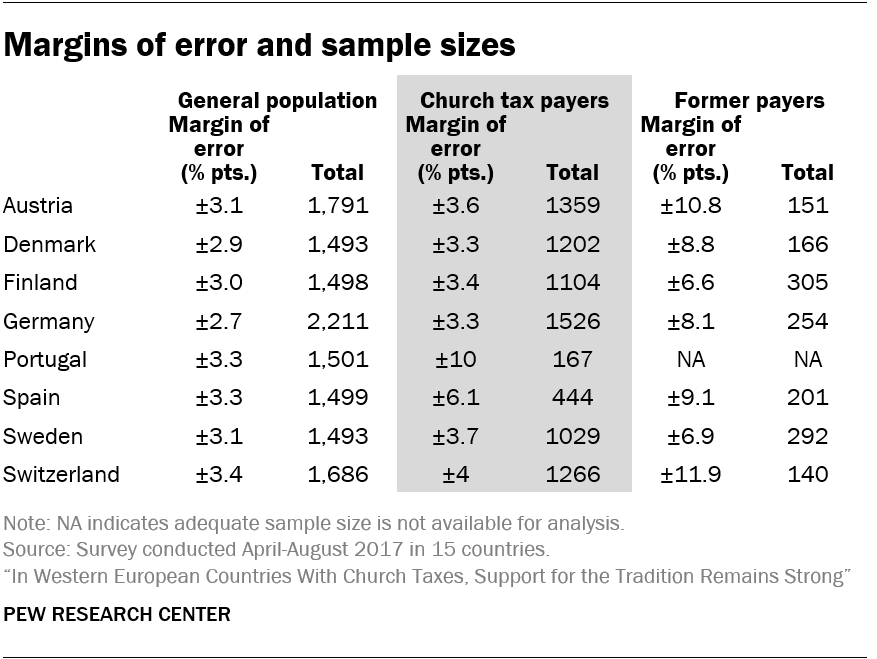 Pew Research Center conducted surveys among 24,599 adults (ages 18 and older) across 15 countries in Western Europe. This report includes analysis of a subset of six countries that levy a mandatory church tax on registered members of officially recognized religious groups, as well as two countries that have a voluntary, opt-in option.

Interviews were carried out under the direction of GfK Belgium by cellphones and landlines from April to August 2017. The questionnaire administered by survey interviewers was designed by Pew Research Center staff in consultation with subject matter experts and advisers to the project. The full survey questionnaire was pretested in all countries prior to fieldwork.

The nationally representative surveys included samples of about 1,500 or more respondents in each country, allowing researchers to analyze the opinions of current and former church tax payers. A combination of landline and cellphone random-digit-dial samples was used. Respondents in the landline sample were randomly selected by asking for the adult who has the next birthday. Interviews in the cellphone sample were conducted with the person who answered the phone, if that person was 18 years or older.

The combined landline and cellphone sample was weighted using an iterative technique that matches age, gender, education and regional population distributions to parameters from the latest census data available for the adult population in each country. In the absence of census data, large government surveys were used as benchmarks. The weighting procedure accounts for the fact that respondents who have both a landline and a cellphone have a greater probability of being included in the combined sample; it also adjusts for household size among respondents with a landline phone. The reported margins of error and statistical tests of significance are adjusted to account for the survey’s design effect, a measure of how much efficiency is lost from the weighting procedures.

More details about this project’s methodology, including country-specific sample designs for this study, are available here. More general information on international survey research at Pew Research Center is available here.

For these reasons, the shares of payers reported in this study should not be mistaken for official numbers of church tax payers in a country. Rather, they should be only be interpreted as how many people report paying the church tax.

Separately, some churches and governments maintain records of how many people paid the church tax each year and how many have deregistered and no longer pay. These figures, when available, can be used to measure the actual number of people who pay the tax.

To get a sense of how people’s self-reported church tax payment compares to official statistics, Pew Research Center researchers collected data on church tax payment by contacting government agencies and church authorities in all six countries with mandatory systems. With the exception of Switzerland, researchers were able to calculate payment rates in all countries. In Denmark, Sweden and Finland, there are modest gaps between the share who say they pay and figures provided by the government. However, in Austria and Germany, significantly more people reported paying the tax than what is officially reported. For more details on how researchers evaluated the validity of the survey findings see “What happens when a survey estimate doesn’t match a known benchmark.”

Next: Appendix B: Data sources by country
← Prev Page
Page1Page2You are reading page3Page4
Next Page →

In Western European Countries With Church Taxes, Support for the Tradition Remains Strong Acknowledgments
Appendix A: Methodology
Appendix B: Data sources by country